The setting where I eat has always been much less important than what’s on my plate. I’d rather have a superb meal in a tent in the middle of a muddy field than a bad one at the Ritz.

Some of the finest food I’ve eaten in Mallorca was served in restaurants with oilcloths covering the table — and some didn’t even have an oilcloth.
But sometimes it’s rather nice to go to a place where the surroundings are the name of the game. That’s what happened last week when I went to Restaurant Barretes in Sóller’s Hotel Cal Bisbe.

If you’re at all interested in magnificent backdrops and impressive industrial architecture, then you will adore Hotel Cal Bisbe.
It was once a spectacular olive oil mill, one of several that were needed to press the crops from the nearby groves.

But at some point someone decided to turn the mill into a hotel — and that person was also was smart enough to do so without making changes to the original architecture.
The result is that the entrance to the hotel and the restaurant is among the most stunning on the island. Good architecture is all about space and how it is used and you are aware of that as soon as you go through the door. 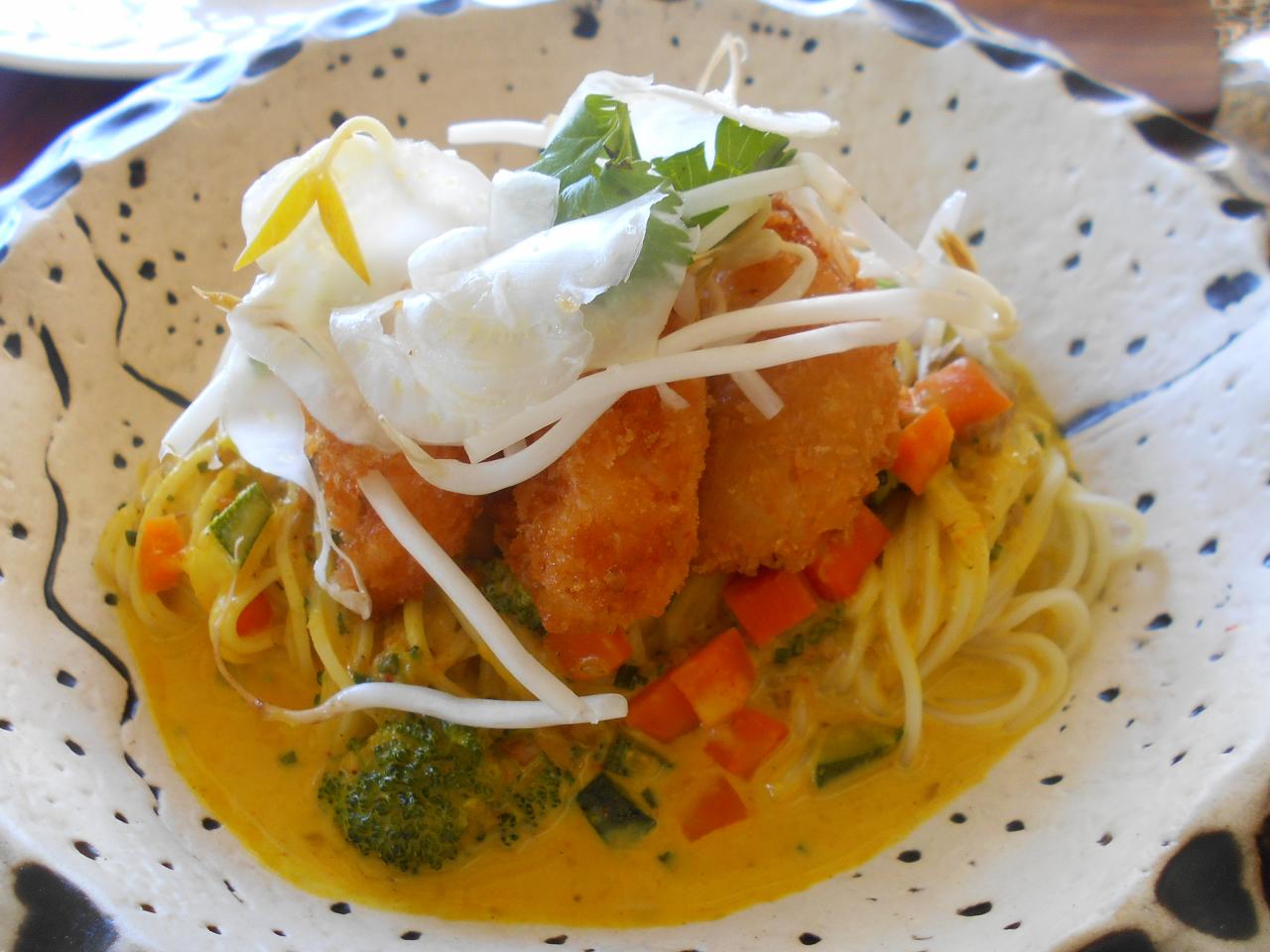 The dimensions are church-like and just as awesome: an immense width and height that make you feel more than a little insignificant.
You’ll see here and there mementos of the old mill, such as an enormous and ancient hand-operated scale where the baskets of olives were weighed.

The hotel reception area is discreetly tucked away
in a corner, visible, but at the same time nicely lost in the immensity of the surroundings.
The restaurant tables are laid out in such a way that they don’t look as if they are part of a dining room. Another nice little discretion.

The tables are beautifully and expensively laid but the cutlery isn’t right. It’s of a matte golden colour and it simply doesn’t work in this setting.

I’ve seen it at the Trends shop behind El Corte Inglés in Avda Jaime III and even on display it doesn’t look good. I’m sure it’s on the expensive side, but it looks a bit tawdry.
The table chairs are big and comfortable, especially when you lean back and take a look at the section of the Tramuntana in front of the hotel: it’s a magnificent sight of an incredible mountain range and I never tire of gazing at it.

But the chairs are uncomfortable when you’re eating. The arms are too high and they keep getting in the way when you’re using a knife and fork.

Don’t rely on your GPS or Google Map to get you to the door of Hotel Cal Bisbe: both will take you into a maze of very narrow streets. Your best bet is to use the nearest parking lot and take a five-minute walk down to the hotel. It’s worth the effort to see what can be done with an old Sóller olive mill.

It’s a bad day when more is not enough

The great Auguste Escoffier, the father of modern haute cuisine, who won international fame when he worked at London’s Savoy Hotel (1890-99) and later at the Carlton (1899-1919), had a most succinct piece of advice for young cooks. It was ‘faits simples’, or simple deeds.

By that he meant keep it simple and especially stay away from elaborate garnishes and complicated sauces. 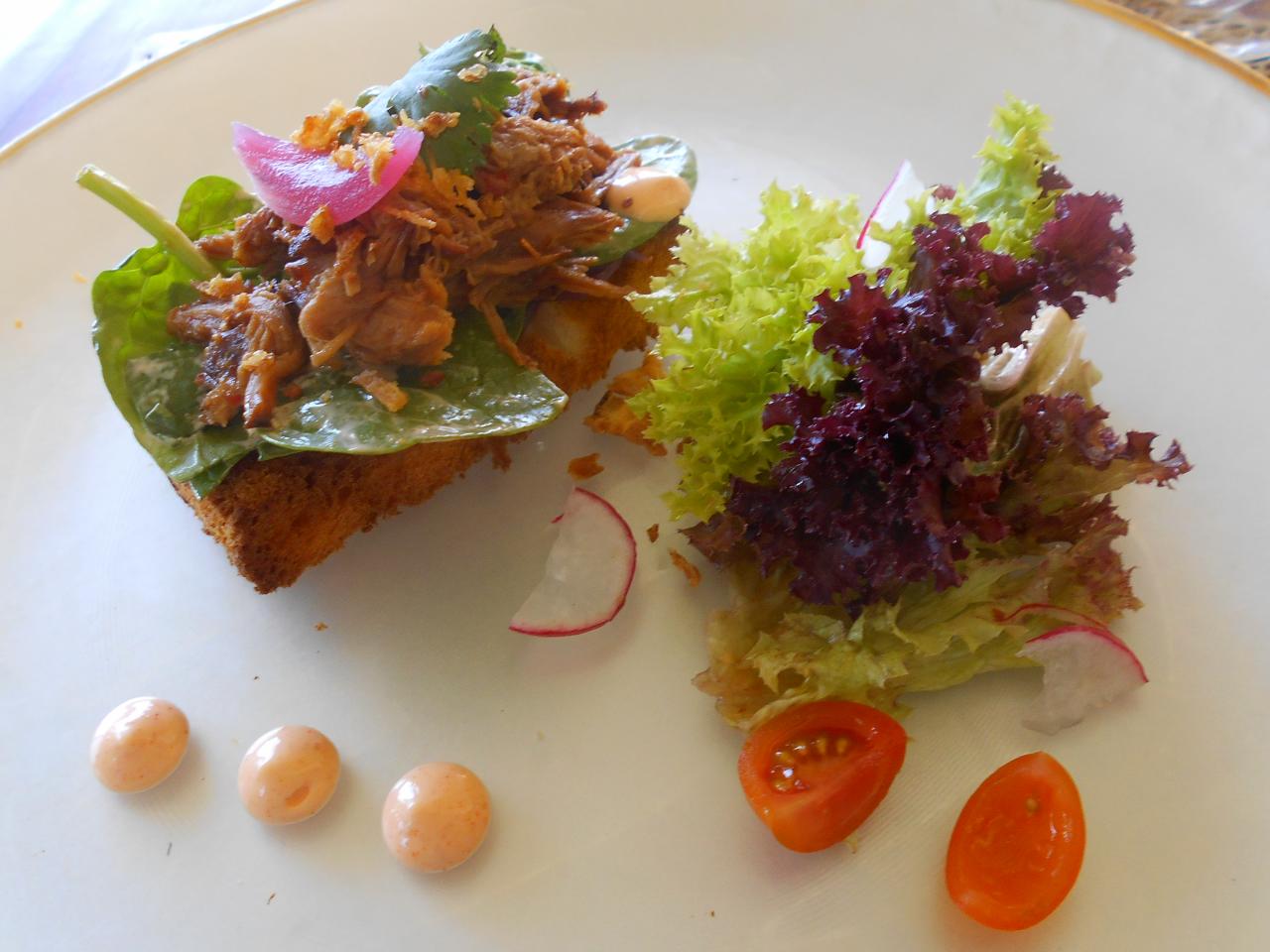 It would seem that the cook at Barretes has never heard of Escoffier’s advice — or perhaps he has preferred to ignore it.

What is for sure is that he thinks more is never enough and he doesn’t seem to know when to stop adding garnishes and another few spoonfuls of sauce.

This was most evident in my main course, strips of the secreto cut of pork atop of mish mash of veggie garnishes and far too much sauce. There are many people who delight in this kind of overloading and perhaps that takes in the majority of the regulars at Barretes.

The friend who drove me to Sóller enjoyed his Thai-style noodles and we both liked the terse flesh of the langostinos. But they were batter-fried — another case of overloading because the moisture in this dish made the batter soggy.

No Thai cook — or any other Asian — would ever put batter-fried fish or shellfish into a noodles dish. It simply doesn’t happen.

When any salad greens were involved they were absolutely very fresh and crisp and most bright and colourful — that isn’t always the case at other restaurants.
The most successful dishes of the day were the two desserts — a rice pudding with red fruit and a simple little parfait.

The parfait, was the undisputed star of the day. It came in a Modernist-style deep plate, all on its own in a soup of fresh citric flavours. 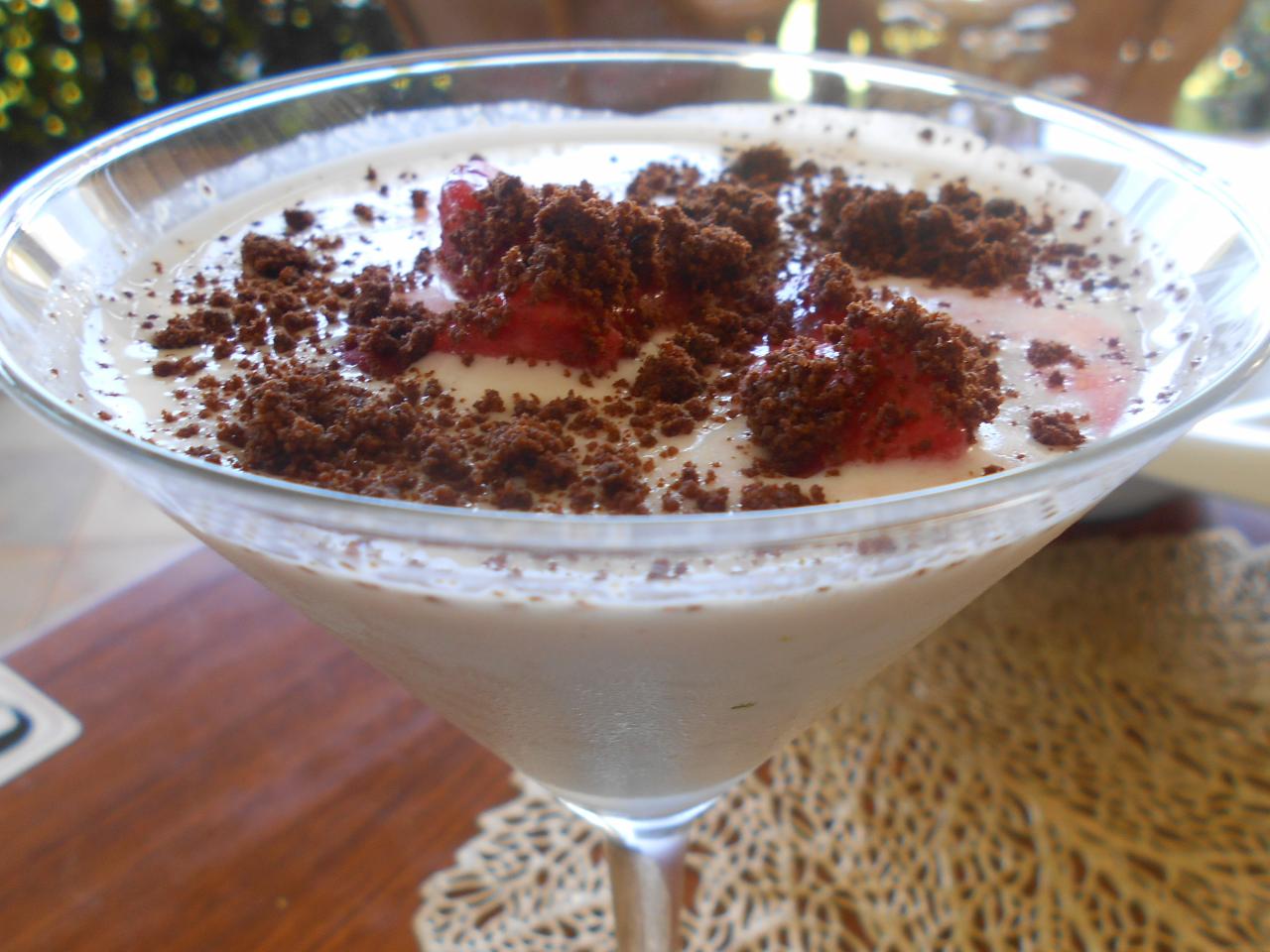 This was what Escoffier meant when he recommended ‘faits simples’ and this is a good example of what the Japanese try to achieve with their concept of ‘less is more’.
The dessert reflected the French meaning of parfait (perfect), partly because of its inherent simplicity, its distinct lack of cloying sweetness, its lovely citric flavours and the contrasts of textures. I always reward such perfection with a 10. And I just loved that Modernist-style deep plate.

There are some very lovely hotel restaurants in Majorca and this is one of them. It has the added attraction of having been an ancient olive oil mill and the transformation to a modern hotel and restaurant was done without spoiling the original architecture, which is positively stunning: incredible dimensions of width and height such as you find in large churches. 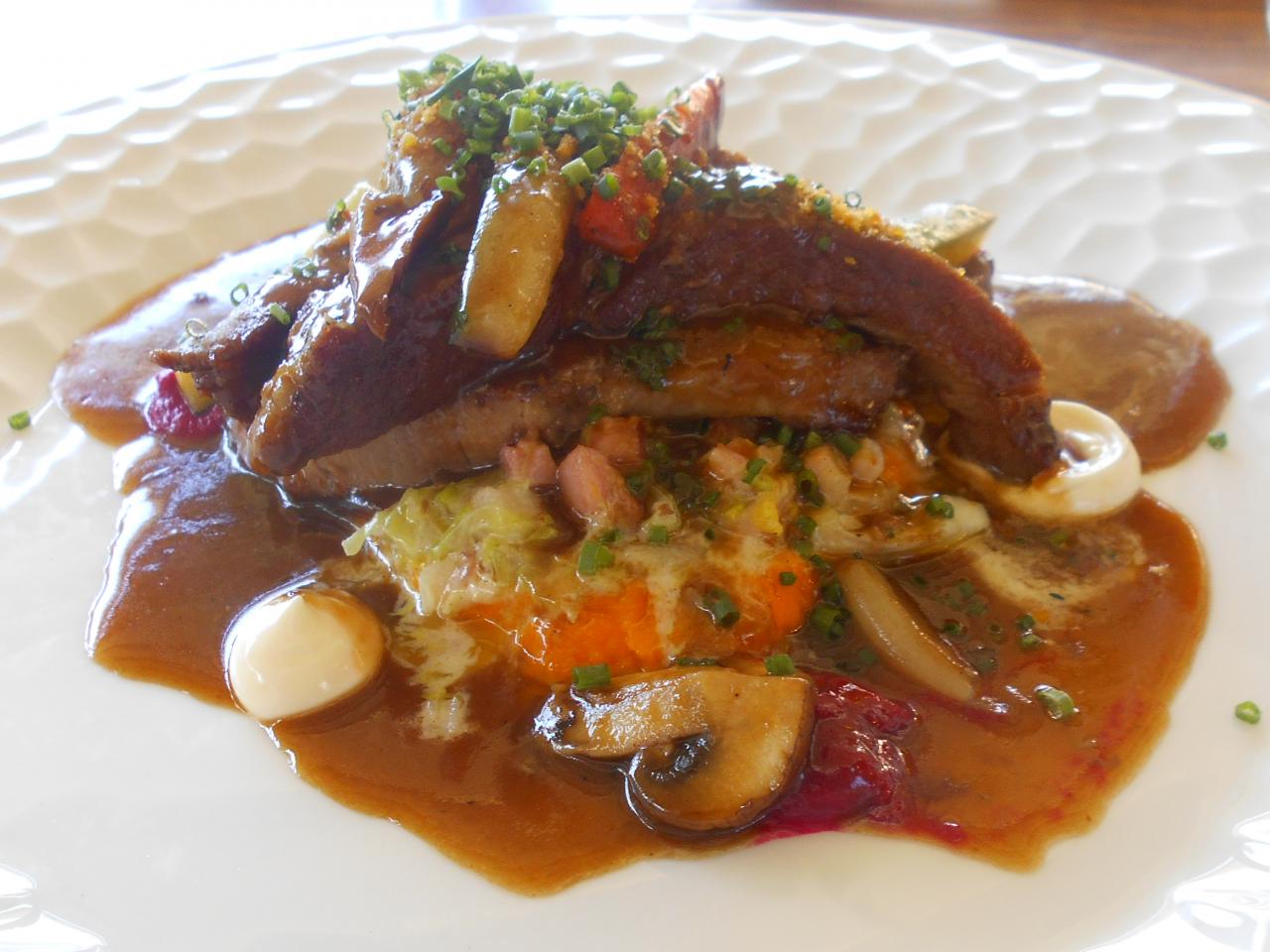 There is another in-built allure: as you sit looking out of the restaurant you have before you a spectacular view of the Tramuntana range of mountains. One doesn’t eat badly at Barretes but there’s not much on the plates that’s in the same class as the surroundings. Instead of following the Japanese concept of ‘less is more’, the cook thinks more is never enough and he overloads the plate with disparate garnishes and sauces. The best dish was a little parfait. It was also the simplest. It was worth a 10.

Restaurant Barretes, Hotel Cal Bisbe, Calle Bisbe Nadal 10, Sóller. Tel:971-63 12 28. Check for opening times. Don’t rely on your GPS to take you to the door of the hotel. It will lead you into a maze of very narrow streets. Instead, get out at the nearest parking lot and take a five-minute walk down to the hotel.

We had two menús del mediodía at €19 and as drinks are not included we also had two large and very lovely cañas at €3 each. That made the total cost €44 with VAT. They also offered us homemade bread whose texture looked beautiful, but as it fills us up we passed on it. That would also have been an added cost.