The restaurant review: A place serving paellas for one

Some restaurant owners and their staff can be particularly obstinate, mainly because they are primarily interested only in their own welfare — they seldom take into consideration what is best for their customers.

This attitude is most blatant of all when you order a paella: some 99.999 per cent of restaurants insist that paellas must be for a minimum of two people. Those eating alone cannot have a paella unless they order one for two — and take the leftovers home as a takeaway. It’s not a good deal for the lone customer, is it?

The owners claim that making a paella is a great deal of work and is only profitable if it is being cooked for at least two.

This is nonsense because the basis of the paella is already cooked and needs only to be put in a paella pan with the rice, done on the cooker for five minutes and finished off in a hot oven for another 10 minutes.

It’s just as easy to do it for one as it is for two or four.
Two months ago, when I happened to be passing a place that specialises in paellas and other rice dishes, I went in and said I was on my own and wanted to try one of their paellas, which are a good more expensive than at other places. The waiter said paellas had to be for a minimum of two people.

It was 1.30 pm and all tables on the terrace and in the dining room were unoccupied. It would have been very easy to make a a paella for one. But they were obstinate and didn’t — and missed out on a double page review in the Bulletin and an article in Ultima Hora.
It was quite the opposite when I looked in on Santa Catalina, a Spanish restaurant in Calle Fábrica. Their menu says paellas are for a minimum of two but when I asked a waitress if they would do one for a person on his own, she immediately said that wouldn’t be a problem.

Sometimes at a table of four or more, she added, one person asks for a paella. If they are extremely busy the paella for one may take a little longer, but the diner will get it. That’s what I call a good flexible attitude.

This restaurant doesn’t open until 6pm so I went along just before seven, expecting to be the first customer — but every table on the terrace was occupied, except for one, which was reserved for me. I had forgotten that holidaymakers dine early. I decided to eat inside by the window, leaving the terrace table for some passing couple on holiday. 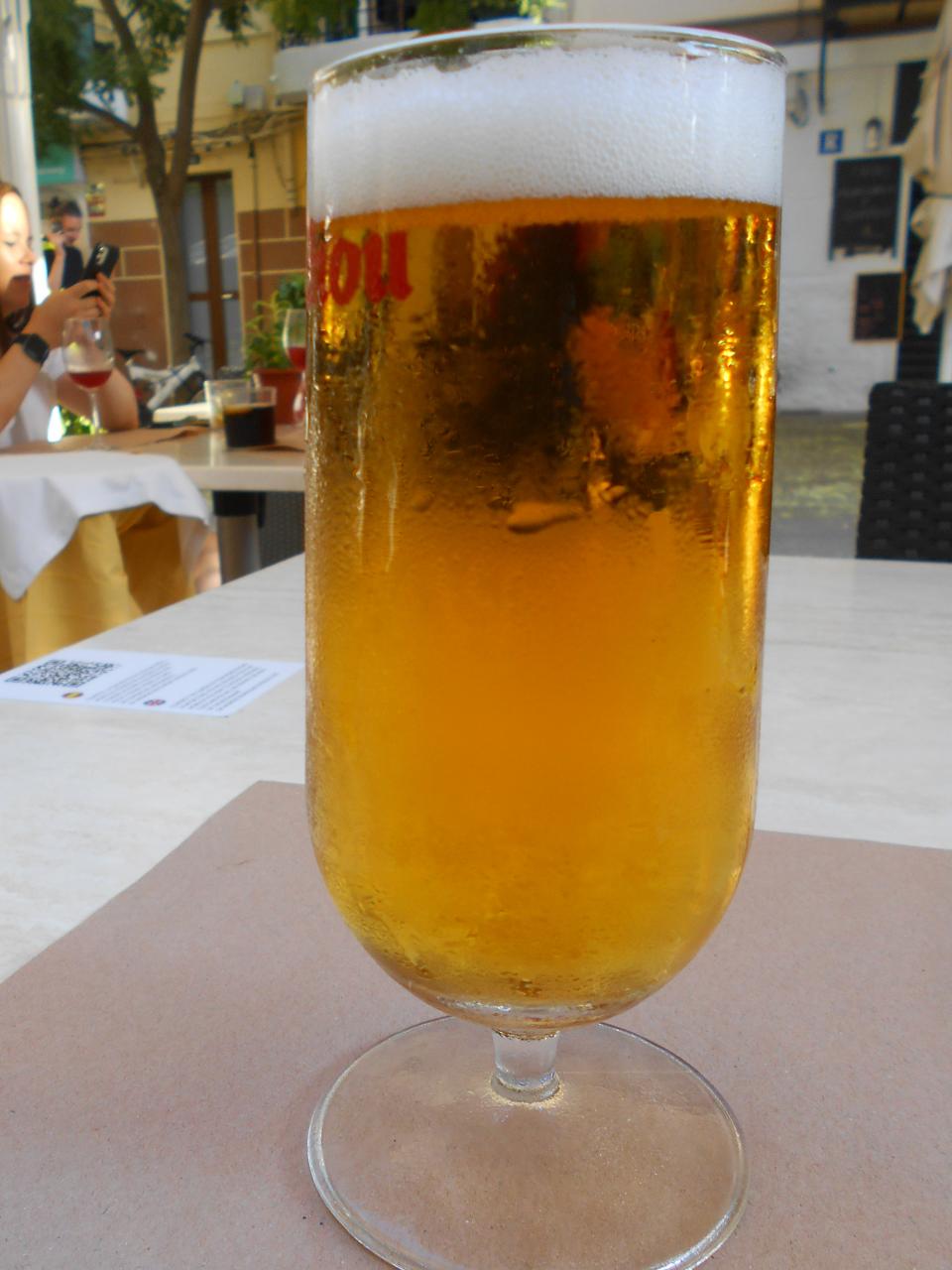 I ordered a fish and seafood paella, instead of the mixed paella I usually have. It was a good choice, because there was a nice variety of fish and shellfish. It included two large gambas on the shell, four mussels on the half shell, another five shelled mussels, three shelled langostinos, a few bits of hake and a generous amount of chopped calamares.

But, most important of all, there was a good quantity of rice that was nicely cooked and had absorbed lovely seafood flavours. So many cooks nowadays forget that paella is, above all, a rice dish and add too many bits and pieces. Rice connoisseurs will be happy with this seafood paella in which rice has a leading role.

If you’re a newcomer to the island and are looking at a menu of Majorcan and Spanish dishes and can’t decide on what to order, it’s a good idea to look at those dishes called fritura, which are coated with flour or batter and deep-fried.

You will also find delicious deep-fried nibbles in other cuisines and they, too, should always be considered.

The Japanese are among the world’s top deep-fryers (think of tempura) and so are the Italians (think of fritto misto di mare) and the British also creep into the lower rungs of this particular A-list (think of fish and chips). 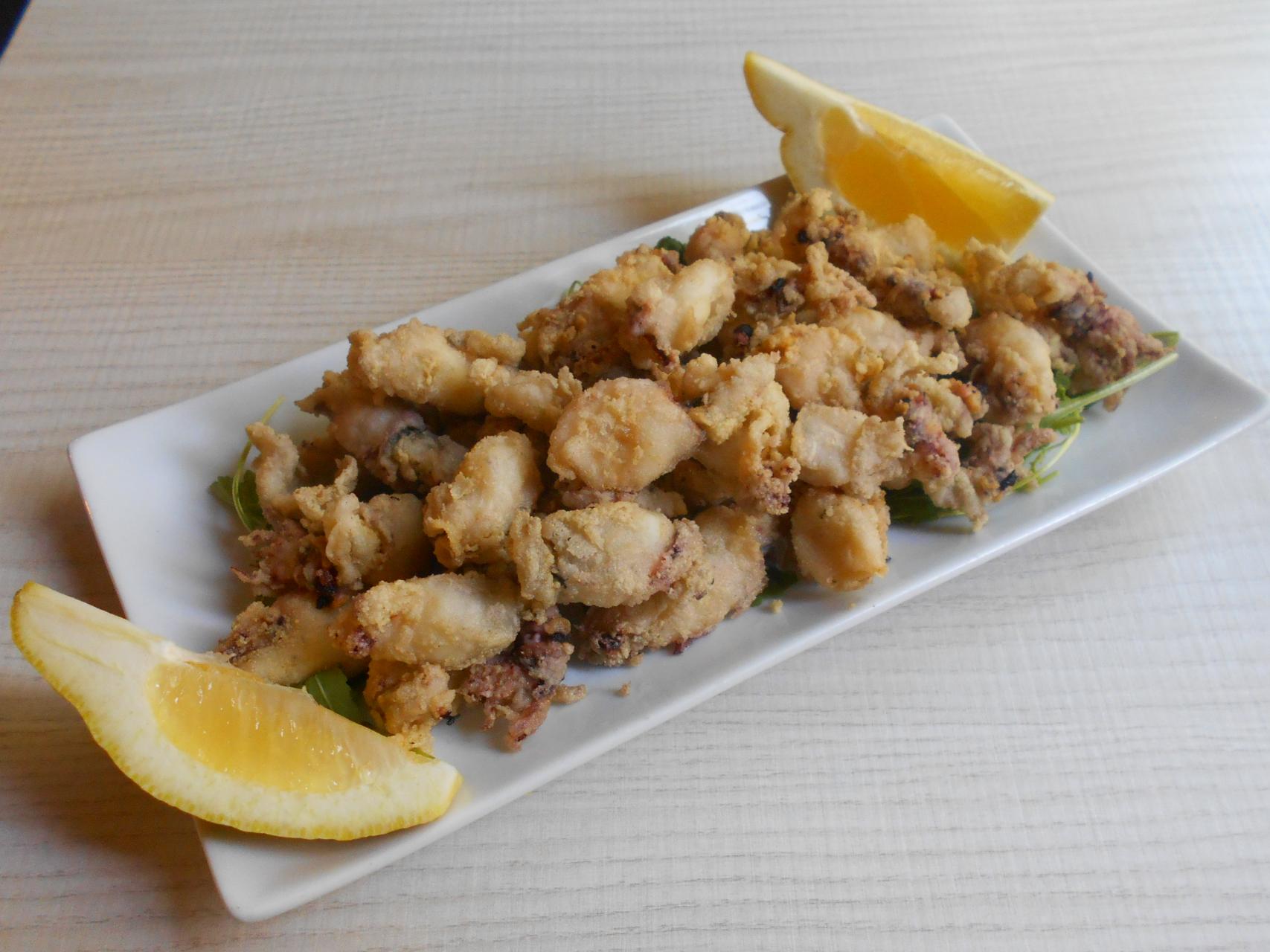 It doesn’t come as a surprise that the Chinese are also dab hands at deep frying (they have been cooking for longer than any other nation) but they don’t have an emblematic deep-fried dish (or cooking style) that has travelled the world. Even so, they are among the top five of the best deep-fryers.

And so are the Spanish, especially the Andalusians and their deep-fried tapas which come under the generic name of fritura. There are dozens of kinds of fritura, especially fish and shellfish, sometimes coated with flour (the Andalusians prefer chickpea flour), batter, or breadcrumbs.

As I knew I was going to be eating a paella for one, I wanted a couple of light tapas as starters, and thought bacalao croquettes and chipirones (small squid) would be just right.
The bacalao (salt cod) croquettes were ideal because there were five of them (a normal tapa portion) and that got the meal off a a light start. In the past most bacalao croquettes have been a big disappointment, mainly because they hardly tasted of bacalao. 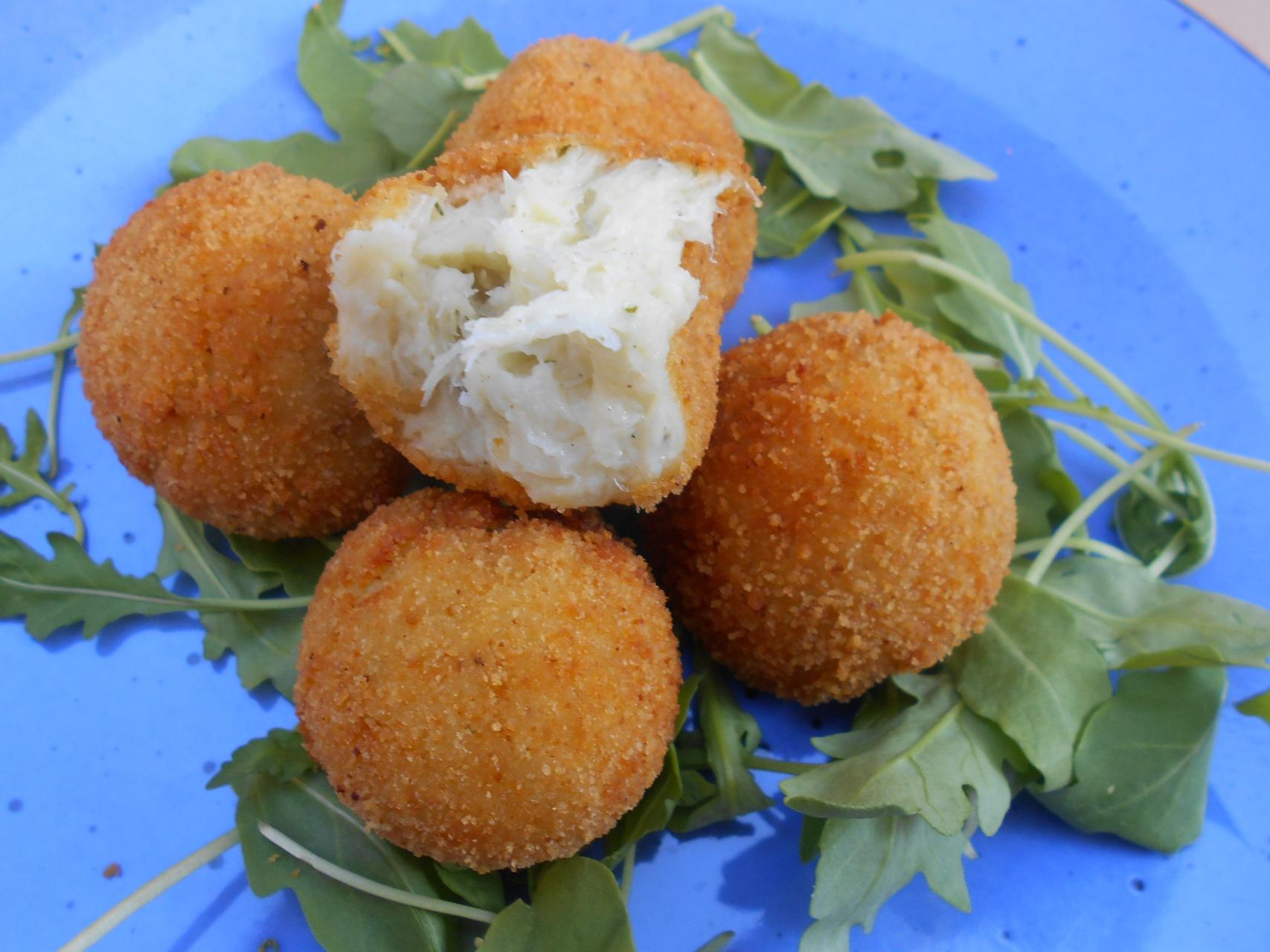 But as I took pictures of the croquettes, which had come straight from the deep-fryer, the bacalao aromas came wafting up to my nostrils. That was a good sign. When I bit into one, an even better sign was the threads of bacalao that had been pounded in a mortar, and the lovely taste. These were memorable bacalao croquettes.

The light start to the meal didn’t continue with the deep-fried chipirones — because the portion was absolutely gigantic, as can be seen in the picture. And look at the price. Four people could have shared this dish and the generous-sized tapa for each one would have worked out at €1.75. Tapas nowadays don’t come any cheaper than that. 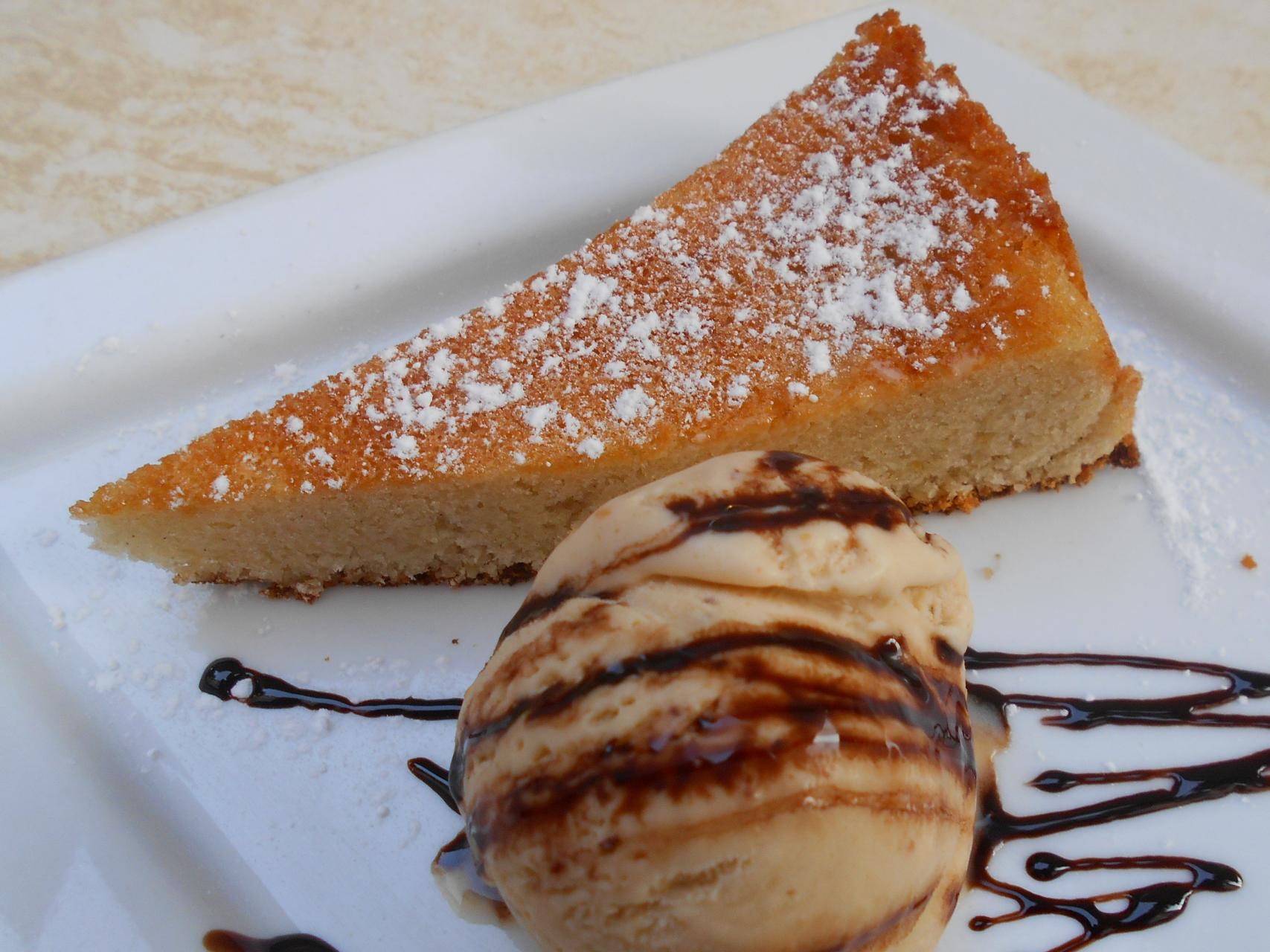 Although I didn’t need a dessert to finish off the meal, I had to have fifth picture, so I ordered a slice of gató and an almond ice cream. The texture and taste of this Mallorcan spongecake were delightful — and for me ice cream is a all-year-long pleasure, especially during the summer months.

The restaurant owners’ ruling that paellas must be ordered for a minimum of two is discriminatory— and totally unacceptable when arbitrarily applied to diners eating alone. Santa Catalina’s seafood paella for one was most successful, partly because the cook was aware that paella is, above all, a rice dish and rice must have a leading role. Too many cooks add so many bits and bobs that the rice gets pushed into what is barely a walk-on part.

That didn’t happen at Santa Catalina and all real rice connoisseurs will be pleased. The paella contained four mussels on the half shell and five without, two large unpeeled gambas, three peeled langostinos, bits of hake and a generous amount of chopped squid. The bacalao croquettes had great texture and taste and the portion of deep-fried little squid would have provided a tapa for four.

Restaurante Santa Catalina, Calle Fábrica 8, Palma. Tel:971-281751. Closed on Wednesdays, otherwise open from 18 to 23.30. People on holiday dine early, so if you want a table on the terrace, be sure to make a reservation.