A seasonal lamb dish and some soccer fans

Jaume Vallés, his son Jeroni and Omar Hevia of the Bar del Atlético Baleares. | A. ESTABEN

When writing a restaurant review, as in life itself, things can go wrong, plans can go awry and one has to improvise. That was what happened when we went to a local bar to have a seasonal dish called fideos de vermar. 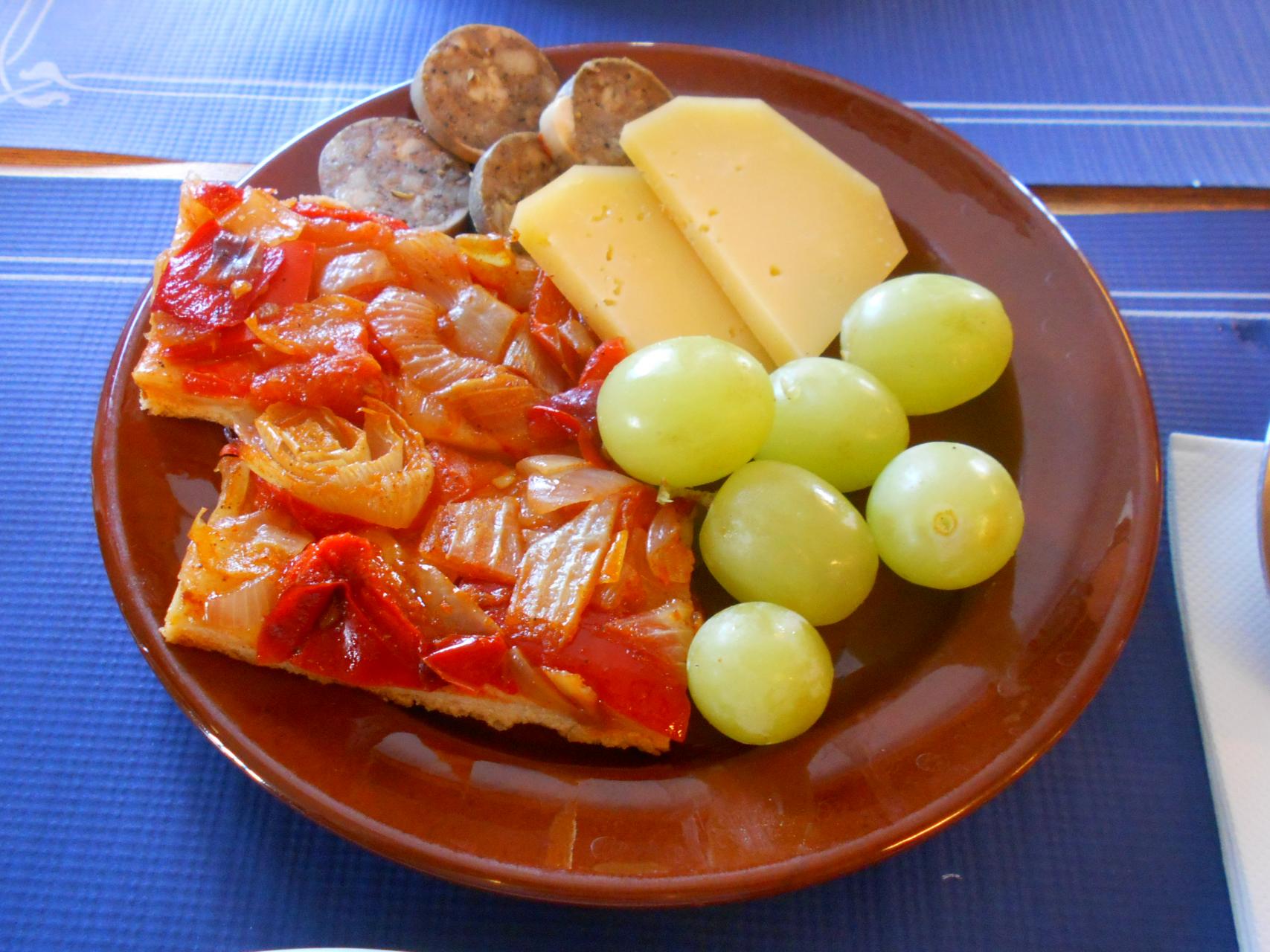 Next the bar owner. His name is Jaume Vallés and he may well be the club’s number one fan — he and his staff wear the club’s colours and badge during working hours.
Jaume, who is from Binissalem and is also the cook, has several Mallorcan dishes on his menu but he also does certain local specialities when they are in season. One of these dishes is associated with Binissalem.

That brings us to the dish. It’s called fideos de vermar and it’s traditionally eaten during the grape harvest. Binissalem is one of the island’s main wine producing areas and since way back fideos de vermar was served to those helping out with the grape harvest.
Fideos de vermar means ‘grape harvest noodles’ and it is made mainly with pieces of lamb (originally it was mutton) and broken pasta as thin as spaghetti and made in Porreres.
Jaume does a soupy version of the dish that is served with Majorcan pan moreno and ‘olives trencades’, the island’s green olives that have a bitter taste. 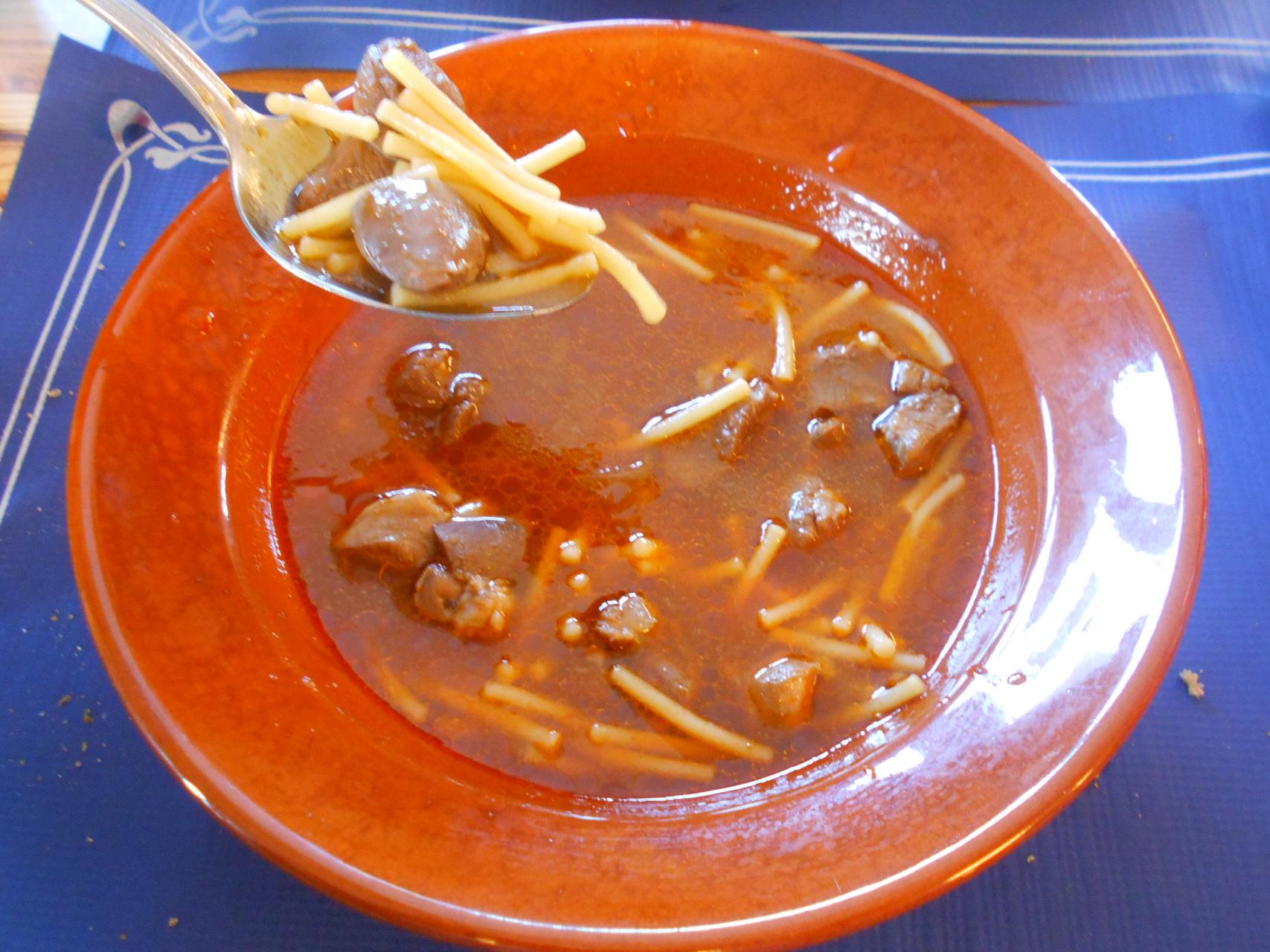 The €10.50 price also includes a starter made up of half a dozen plump green grapes, two slices of cheese, slices of botifarrón (Mallorca’s black pudding) and two pieces of coca with a red peppers topping — which makes it a very good deal for €10.50.

But much as we enjoyed the fideos de vermar, the dish on its own wasn’t photogenic enough to be the main picture for the review. So I had to think of something else.
Colleague Amalia Estabén, who writes about Majorcan food in sister paper Ultima Hora, had done a report on the fideos de vermar at Bar del Atlético Baleares, and one of the pictures she took was just what I needed for the review.

It shows cook-owner Jaume Vallés with his son Jeroni and Omar Hevia with the main ingredients for a fideos de vermar — plus a box of grapes which are also served with the fideos dish.

His fideos will be the bar’s main dish every Thursday and as it is extremely popular with the regulars, Jaume will continue to serve it weekly until March.

So there’s plenty of time to get out there and taste this famous seasonal dish from Binissalem. Jaume uses his mother’s recipe, so his is a most authentic version.
One of the nice things about eating at Bar del Atlético Baleares is that is it within the precincts of the club’s grounds so there is a huge parking space as soon as you drive through the gate. For once, parking isn’t a problem.

Why we ended up with triple dessert.

Even before the fideos de vermar meal started, I knew the main picture for the review was going to be a bit of a problem: a plate of something soupy, even when it contains pieces of lamb and broken pasta, is seldom photogenic. 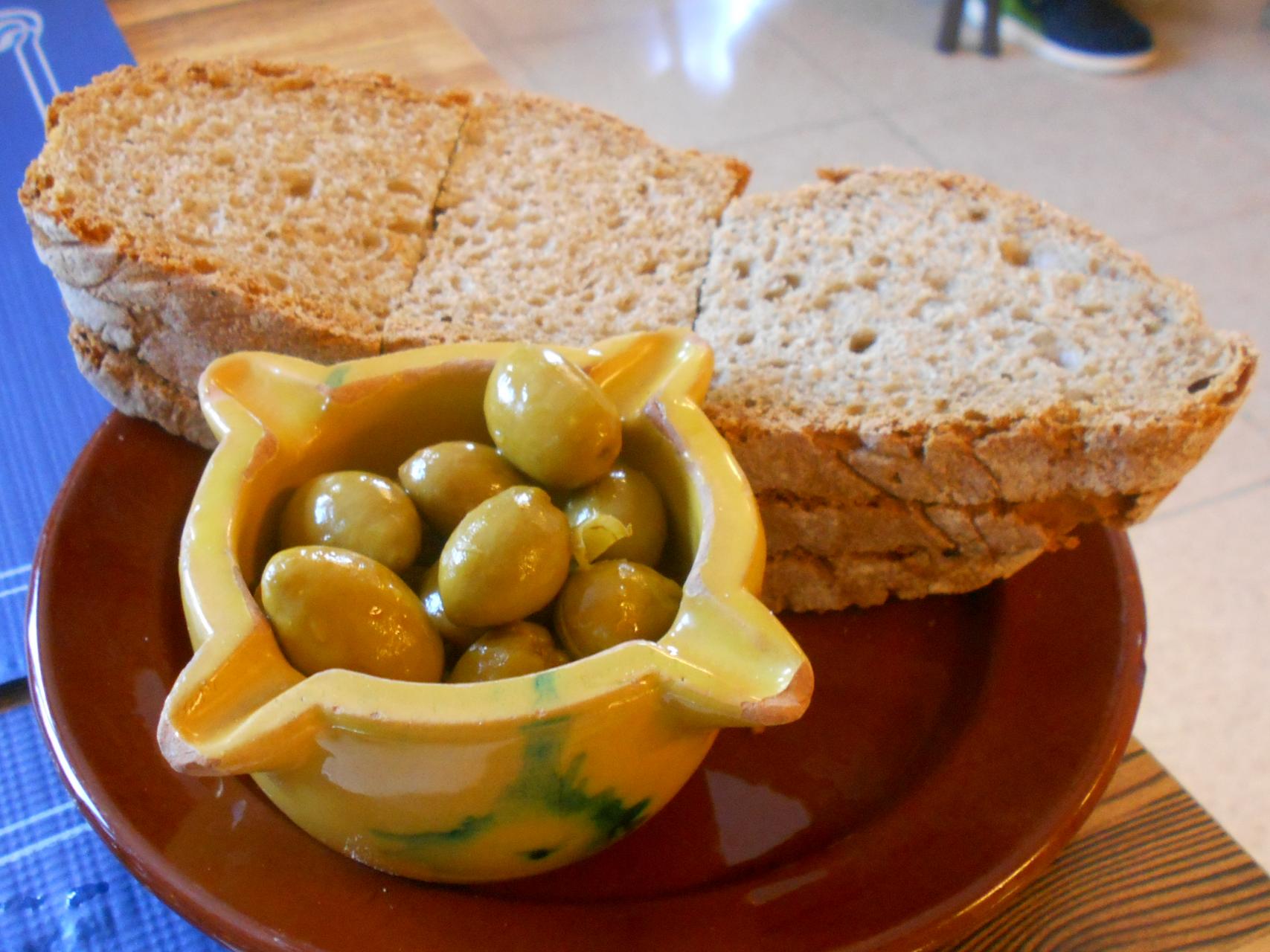 The problem is that the main review picture is blown up to nearly half a page, so it has to look reasonably attractive. The plate of fideos, even with the bread and the olives on the side, didn’t quite fit the bill: there was too much liquid.

When I go to a restaurant I’m always interested in looking around at the nearby tables to see what other people have ordered.

At one table a woman was about to start on what looked like a triangular piece of a large ensaimada, ice cream and something else. I looked good enough to be the main picture.
But when I talked to Jeroni, the owner’s son, and asked about this dessert, it turned out that the woman had been served the last piece of ensaimada. 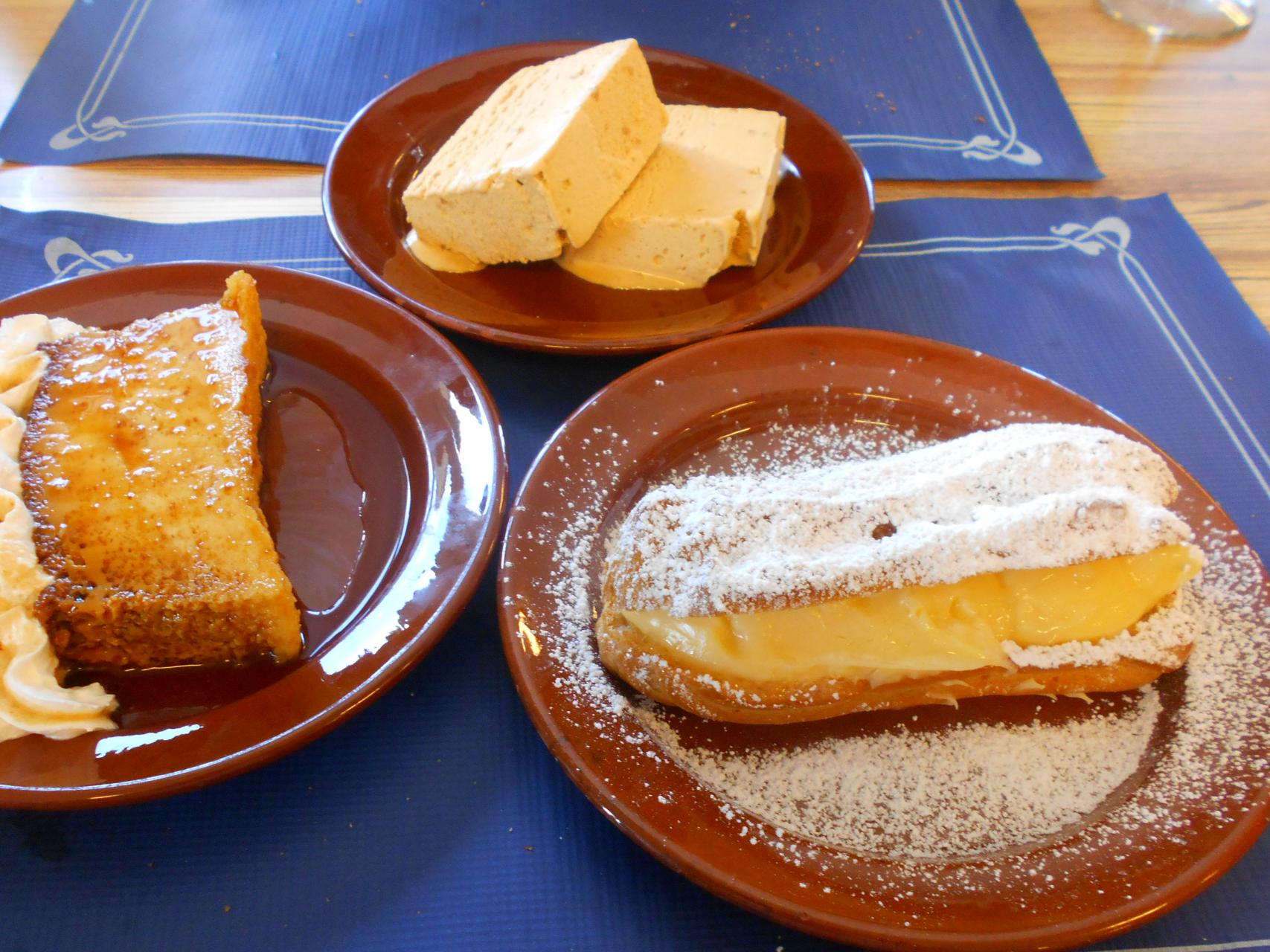 As he knew I was a colleague of Amalia of Ultima Hora, I told him I would like to take a picture of a dessert made up of three items, something that would look eye-catching on the plate. He went off and came back with the triple dessert in the picture.

It wasn’t quite what I had in mind but it had the visual impact I was looking for and it was unique in that I have never ordered a triple dessert.

The three desserts were two slices of ice cream made with turrón, a slice of ‘budin’ (a kind of bread pudding made with unsold ensaimadas) and a cake called a ‘palo de crema’, an elongated choux pastry filled with thick custard.

As I wrote in Thursday’s page about some of the best desserts of the past summer, I don’t have a sweet tooth and I never need to finish a meal with desserts of any kind.
If they are on the table, however, I’ll eat them.

So I had no qualms about claiming my share and I thoroughly enjoyed all three. But this was a one-off. There will be no more triple desserts for two…at least, not until the next time.

If you’ve never been to a Palma neighbourhood bar, then Bar del Atlético Baleares will be an ideal introduction. It’s got everything. It’s noisy, with a tremendous buzz supplied by the customers, who all know each other (they are mainly Atlético Baleares fans) and you can eat Majorcan tapas and special seasonal recipes, so it’s also an introduction to Mallorcan food cooked by a Mallorcan for his Mallorcan customers.

The dining area is all very basic with no frills whatever — but you’ll eat well. Behind the bar is a blackboard with a list of their tapas, which includes old favourites such as ensaladilla, albóndigas (meatballs), pica pica (chopped calamares in a picante sauce) and frito mallorquín, among others. They are priced at €7 each or you can have them made up into ‘variados’ — a plate on which five to seven small portions are served. The seasonal fideos de vermar dish served on Thursdays is extremely popular so don’t turn up without a reservation.

Bar del Atlético Baleares, Calle Gregorio Marañon, Palma. Tel:971-447294. The bar is in the precincts of the Atlético Baleares football ground in an area of Palma called Son Malferit. When you go through the gate there is a large parking space. A ramp takes you up to the exterior glass-covered dining area. A door takes you into the bar. It’s noisier there but there’s more of the atmosphere of a typical neighbourhood bar.