The fresh tagliatelle with a plain tomato sauce was worth a 10. | Andrew Valente

Pasta is one of the great buys at supermarkets — even some of the top names in imported Italian spaghetti cost less than €2 for a half kilo packet. That works out at less than 40 centimos for a generous portion.

That means that pasta prices in restaurants should be more than most reasonable — but all too often they’re anything but that.

So when I took a gander at Bar Coto’s menu while on a recce in the La Lonja district and saw they had two pastas at €8.50, I was more than a little interested.

And it was fresh pasta, which is always more expensive at restaurants. I actually prefer pasta asciutta, the dry pasta that comes in packets, but there was no choice at Bar Coto — only fresh tagliatelle with different sauces. 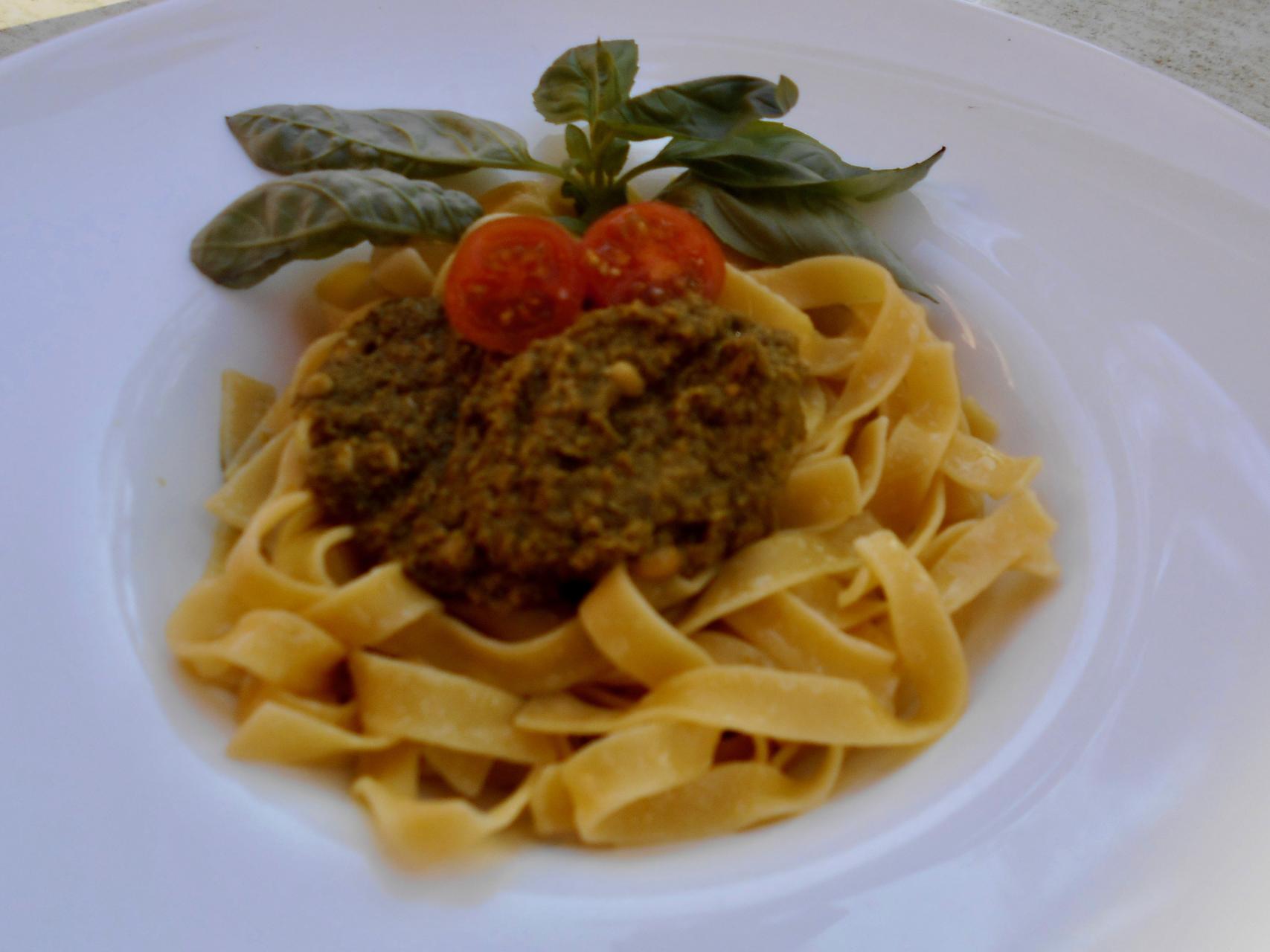 Although Bar Coto is a real bar, it also functions as a fully fledged restaurant but it manages to keep its prices at bar level — so they have other low cost dishes you won’t see at La Lonja restaurants.

I was especially interested in a starter that’s on the menu as ‘boiled potatoes with two sauces’ that had the tapa price of €5.50. But as you can see in the picture, this wasn’t a traditional tapa.

Instead it was a dish of potatoes boiled in their jackets, chopped into nuggets and served with two sauces. One was the kind of white alioli you find everywhere nowadays and the other was a smooth tomato concoction.

The alioli was better than most others I come across, because it had more of a garlic taste to it but without being offensive in any way — which is how most people like it.

The tomato sauce, however, was a real beauty. It was very smooth, with a genuine tomato flavour that went over very easily. But as soon as it had slipped over the back of the tongue, there was a delish aftertaste with a nice hint of spicy heat.

It’s not at all easy to make a tomato sauce with such a lovely piquant touch that is kept tucked away in the background until needed. It impressed me immensely.

By the time I had finished off the boiled potatoes there was still plenty of sauce in its little dish. So I picked I up and drank it. That’s how superb it was.

There was another plain tomato sauce in one of the tagliatelle dishes that contained a small amount of very soft onions. It was the kind of light sauce that works beautifully with fresh pasta. 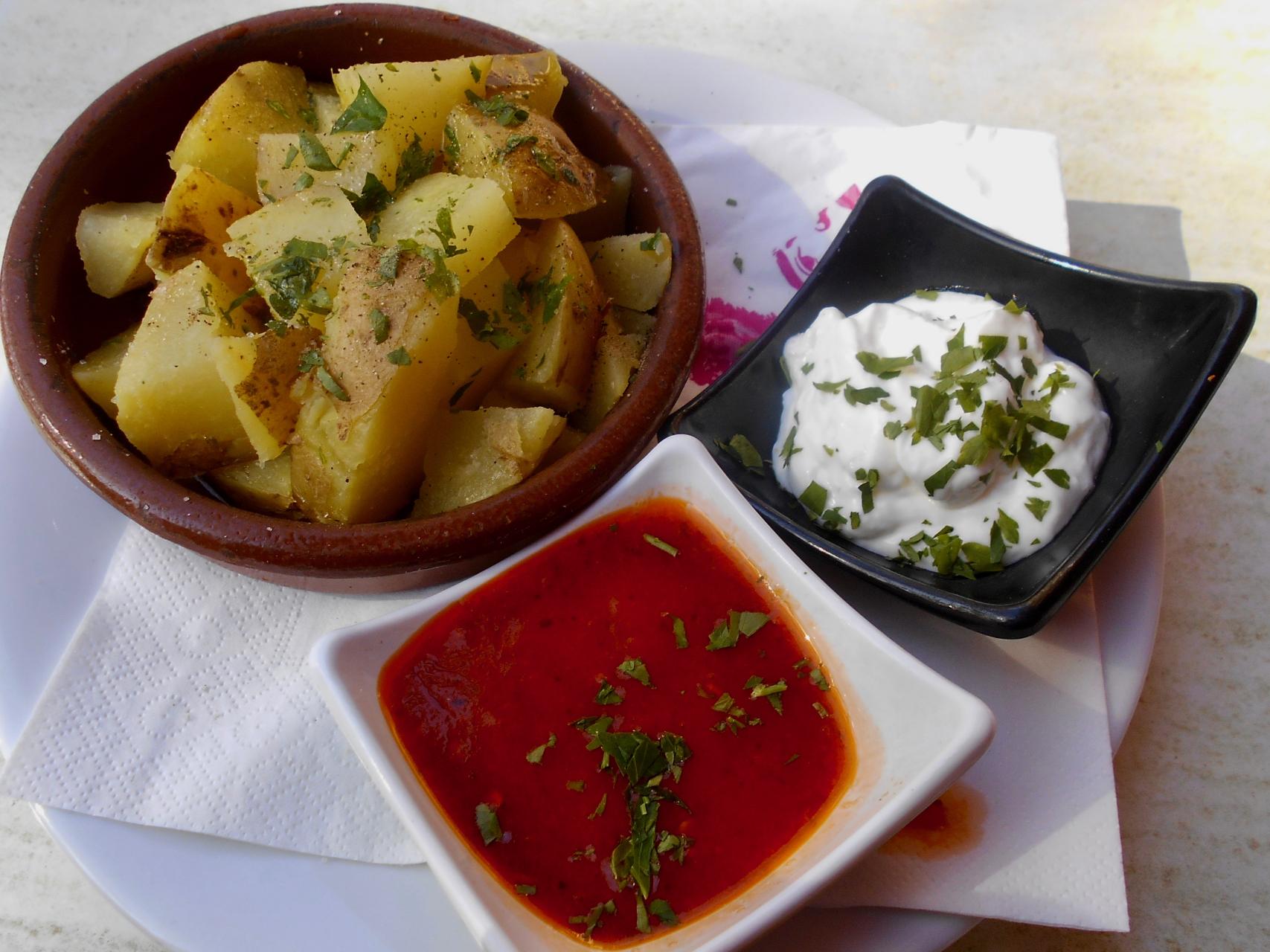 The other tagliatelle came with a generous amount of thick pesto that had a rich basil taste. I’ve had several pesto sauces over the past 12 months and this was one of the best.
Both dishes came with a large clump of fresh basil that gave both dishes eye appeal as well as extra taste — I aways nibble the basil leaves and stalks.

These tagliatelle were so memorable that I thought the cook had to be Italian. I was half right: his name’s Maximilian and he’s an Argentinian of Italian descent.

The two tagliatelles came with little dishes of grated cheese on the side. How often does that happen with a dish of pasta that costs €8.50? That was one of several reasons for giving both tagliatelles a 10 rating.

After 50 years - an egg white omelette

I n a restaurant a couple of weeks ago I came across something absolutely marvellous I didn’t even know existed. In another restaurant last week I discovered something I knew existed but it wasn’t such a terrific find.

One dish spot on, the other not quite right

My first discovery was the voice of Laura Fygi singing La Mer on the background music at La Bottega di Michele. I feel almost ashamed to admit I had never even heard the name of this multilingual Dutch singer with a superb voice that swings like the best American jazz singers. If you don’t know this voice, look for it on YouTube. It’s unforgettable.

My other find was equally accidental. Walking through an unusually tranquil Plaça Drassana on a sunny day, I stopped at the Bar Coto to have a look at the menu.

My first impression was that some dishes were worth exploring and what was especially interesting were the prices — they were very much on the low side. Which is where I prefer them to be. 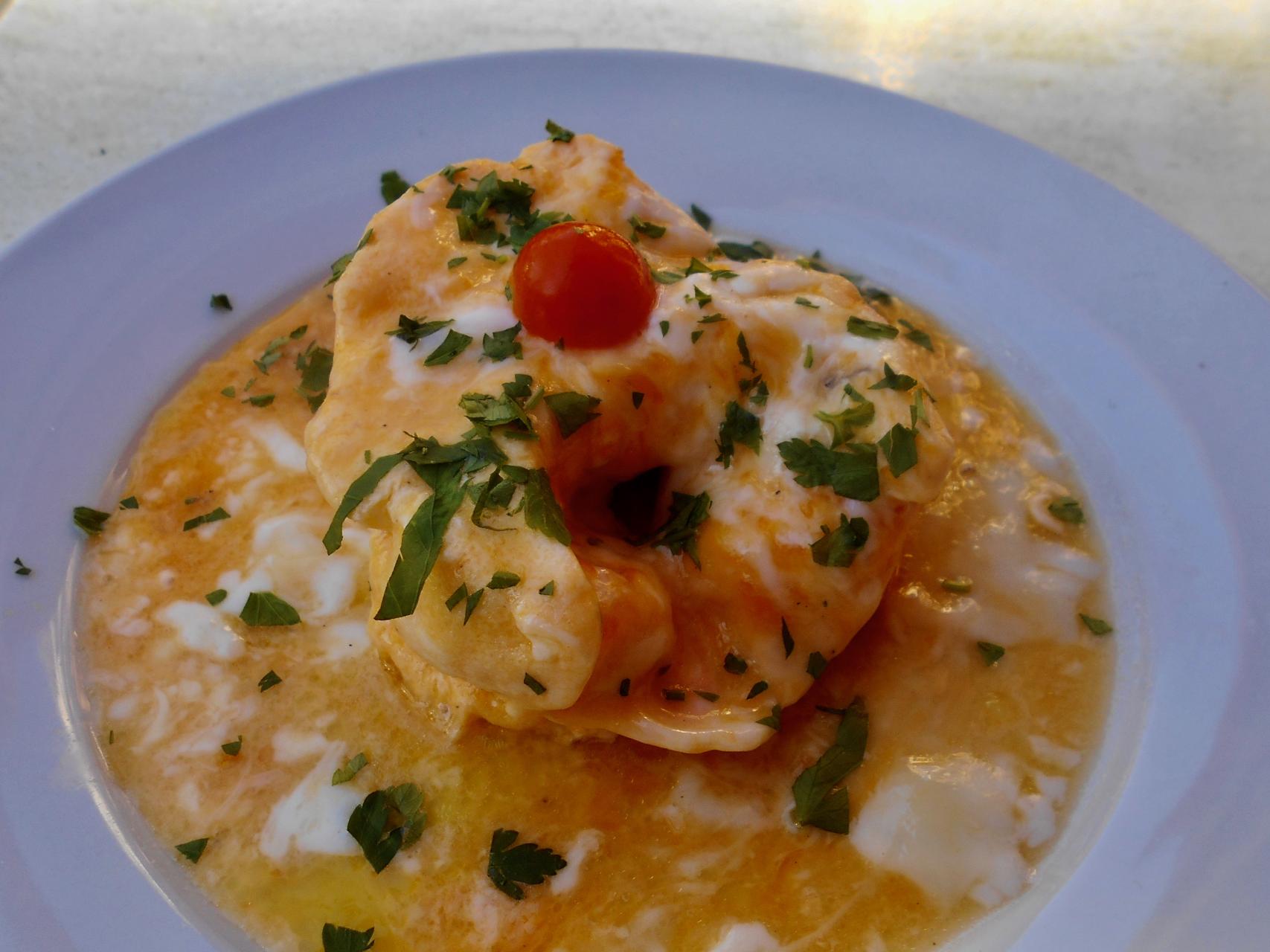 As this bar opens at 8am during the summer it has a selection of breakfast dishes. I ordered for a French omelette and asked the waiter to tell the cook I’d like it really underdone — which is how they do it in France.

After a short time the waiter put a plate on the table, but I immediately told him that dish must be for someone else because I had ordered an omelette.

The waiter quietly explained that as they are a bar it is forbidden to serve fresh eggs that aren’t well and truly cooked. It’s an anti salmonellosis measure and the cook had made an underdone omelette with egg whites.

Well, I thought, I am about to try something that was fashionable some 50 years ago. The vogue for egg white omelettes started in California (as so many food fads do) at about the same time as Californians in bars and restaurants started to drink Perrier mineral water instead of white wine.

In both cases the idea was to lead a more healthy lifestyle and to try to lose a little weight at the same time.

I never got round to trying egg white omelettes because I think there are tastier ways of taking off a few pounds. So here I was, some 50 years late in the game, about to try an egg white omelette. I ate it, but I was not at all impressed. I like the egg white of a boiled egg, of fried eggs and when they are made into soft of hard meringues I eat them with relish. 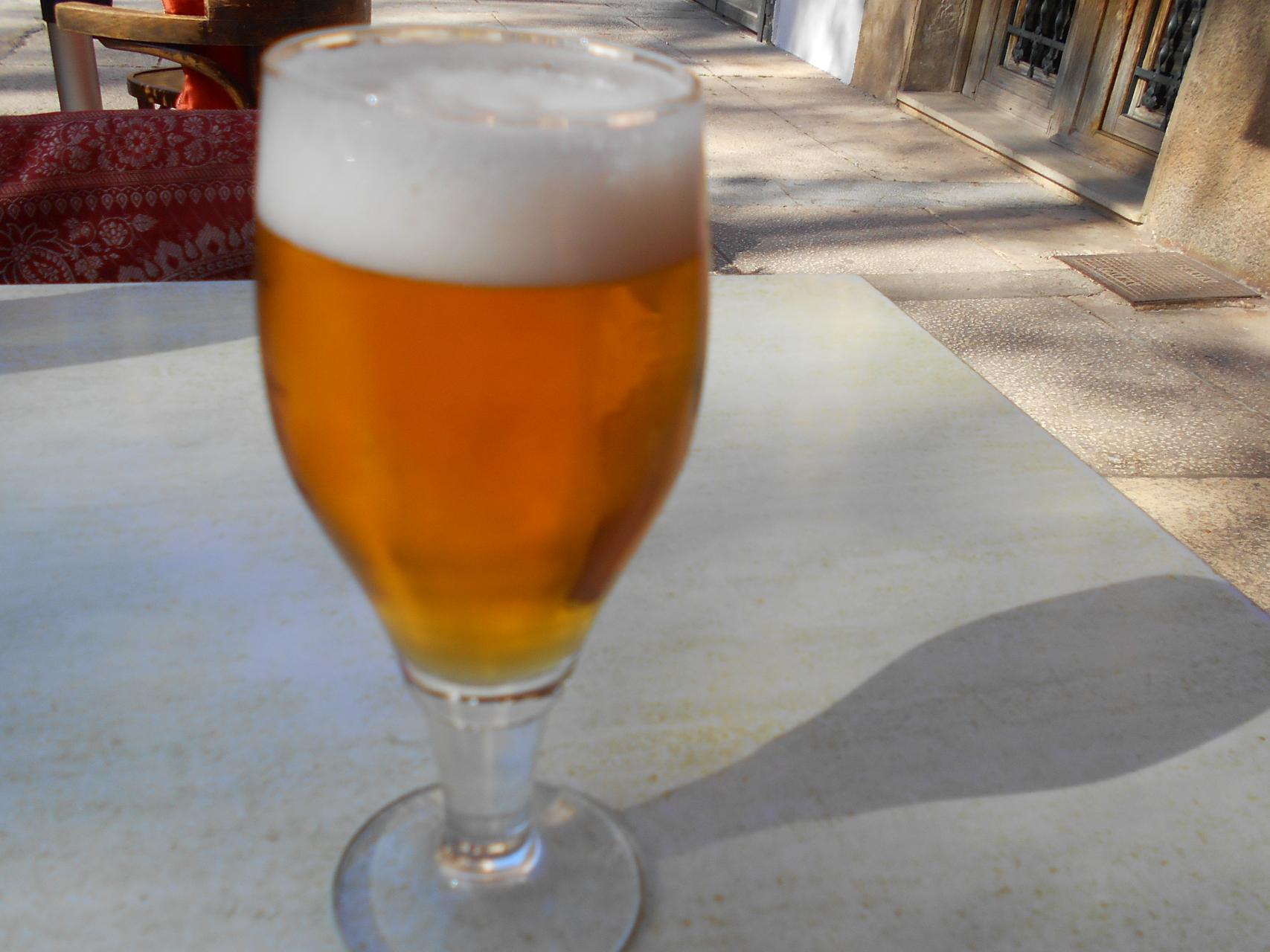 But as an omelette, egg whites don’t work for me, so I’ll never be ordering one. But I’ll be returning to Bar Coto to try other dishes and also to have repeats of the tagliatelle dishes.
And if I order a French omelette I’ll be sure to tell the waiter I want it well and truly overcooked.

There are few things I like better than finding a restaurant where you eat well and at very reasonable prices. Bar Coto comes out tops on both counts. It’s the kind of place that during the season fills up every day with visitors looking for places to eat. They are attracted to Bar Coto’s outdoor eating area and its interesting menu with dishes for all tastes.

The German owner (she has retired and the restaurant is now run by her nephew) built up a menu of international dishes and the staff are multilingual: her nephew speaks perfect Spanish and German and is fluent in English, as are some of the waiters.

The nuggets of boiled potatoes with an alioli and a tomato sauce is their version of a ‘patatas bravas’ dish, but I’m pleased they don’t call it that: it’s much better and more elegant than any ‘patatas bravas’ I’ve ever been served.

The Argentinian head cook of Italian descent produced two excellent fresh tagliatelle dishes, one with pesto and the other with a superb plain tomato sauce. Both were great buys at €8.50 and both were worth a 10 rating.

During the summer they open at 8am but in winter opening hour is around 11am. If you’re having an early lunch it’s probably better to make a reservation. The waiters are multilingual so there will be no language problems.