Back in February I wrote about ‘Pioneers of Majorca’ for the Bulletin, and I made mention to the Albufera Marsh and my favourite hides, the Bishops 1 and 2 and the ‘Eddie Watkinson’ hide. As luck would have it, Pat Bishop got to see my article and subsequently wrote to me. Her four page letter opened my eyes to how the Albufera was secured as the magnificent world-renowned site we know today, and I got to learn more about two great wildlife pioneers more in-depth. So this two part special article is a behind the scenes look at the Albufera and the dedicated people that put their hearts into giving us all the memories and pleasures of the Albufera – namely Pat Bishop and Eddie ‘Edmund’ Watkinson. Where I have made my own comments, I have put these in ‘italics’ so not as to confuse you with what Pat has supplied to me information wise.

A bit about the Albufera Marsh

Before I go on to start the tale about Pat and her adventures, I want to tell you some more about the habitat and history of the Albufera (notes taken from my new book Birdwatching on Majorca). The Albufera Marsh has a surface area of 1,646 hectares. Parts of the grassland here developed during the Tertiary Era, with the wetlands themselves forming around 100,000 years ago. The coastal dune system formed around 10,000 years ago. Giant Reed, Common Reed and Fen Sedge form the bulk of the vegetation along with Reed Mace and Glasswort. Over 10,000 birds spend the winter months in the Albufera, with around 303 different species recorded so far. Twenty two species of mammal have also been recorded. To maintain the quality and quantity of water, the main waterways are dredged regularly and water flow is controlled by a series of floodgates.

The Albufera has seen some great bird specialities over the years which have included Spotted Crake (2003), Baillon’s Crake (year not specified), Cream Coloured Courser (1988), Great Snipe (1989, 1990, 1991 and 1995), Slender-billed Curlew (1988), Terek Sandpiper (1992), Red-necked Phalarope (1989), Great Spotted Cuckoo (1991), Lesser Short-toed Lark (1988 and 1993) and Citrine Wagtail (1987). In 2017 a Western Reef Heron was added to this impressive list, and my friend and resident Michael Montier found a Hume’s Warbler which is a first for Majorca and possibly the Balearics as a whole. Even Pliny once wrote of ‘Night Herons being sent to Rome as a gastronomic delicacy’ from this area. The Albufera is the largest and most important wetland and ecosystem in the Balearics. Once a former lake, it became separated from the sea by a line of sand dunes, eventually becoming a large swamp which was drained in the 1860s.

So when and how did it all begin?

It all began in the 1960s when Majorca would have looked a lot different to what it does now. Pat was married to Edmund Watkinson who became affectionately known to bird watchers and locals alike as ‘Eddie Watkinson’. They visited one winter and instantly fell in love with Majorca (something I myself can relate to). After getting established and better known, Eddie secured an honorary role with the Royal Society for the Protection of Birds (RSPB) as a representative for Majorca. Recognising and arguing that the island had so much potential, thankfully they listened, and Eddie was given a ‘free reign’ to make a difference, and so with his knowledge and foresight the journey began to put the Albufera firmly on the ‘natural world’ map, with the help of Pat and a few others.

Pat and Eddie subsequently moved full time to Puerto Pollensa where they started twice weekly meetings at a local hotel. These meetings were well received and became a font of knowledge for visitors and locals alike, to learn what was to be found on the island bird wise, when and where. Bird watching groups also attended these informative meetings which ran for a number of weeks in the spring and for several weeks in the autumn. It was a grat way to learn what was about. The RSPB donated a collection box which was in the shape of a Puffin, and it affectionately became known as ‘the Puffin box’. People put in what they could afford and monies collected were passed over to the islands bird watching group, the GOB (Grup Balear d'Ornitologia I Defensa de la Naturalesa). Over the years it amounted to a tidy sum for the GOB. ‘In later years I remember attending similar meetings run by the late Graham Hearl, at the Hotel Azul on the sea front, and the famous Puffin box was in attendance then’.

Sadly, Eddie died in 1979 and Pat carried on as the representative. It was only recently from speaking with Pat that I discovered that Eddie had written an early bird watching guide to Majorca now sadly out of print. However, with some help I was pleased to be able to secure a copy from a bookshop in Carmarthen (Wales) which takes pride of place on my book shelf. I have now read the book several times and it was a delight to learn about the sites on offer and the great birds that Eddie enjoyed. Ironically, Eddie used a picture of a Hoopoe for his cover, which is what I also used for my book published this year. It was a nice coincidence and gave me a good feeling to know we shared the same feelings for such an iconic resident species on Majorca’. Pat devoted a hide in Eddie’s memory which is known as the Eddie Watkinson Hide. This hide is well situated to see a good variety of birds from.

‘This hide had a good reputation as being one of the better ones on the Albufera to see a good mix of birds from. So this was the one hide I actually cycled to one dawn in May many ,many years ago from Puerto Pollensa, to sit and wait for my first ever sighting of a Little Bittern, and I wasn’t disappointed. It was also this same hide years later that I found my first ever Trumpeter Finch. In the countless times I have visited this and the Bishop hides, I had no idea the two people behind these magnificent hides were connected’. 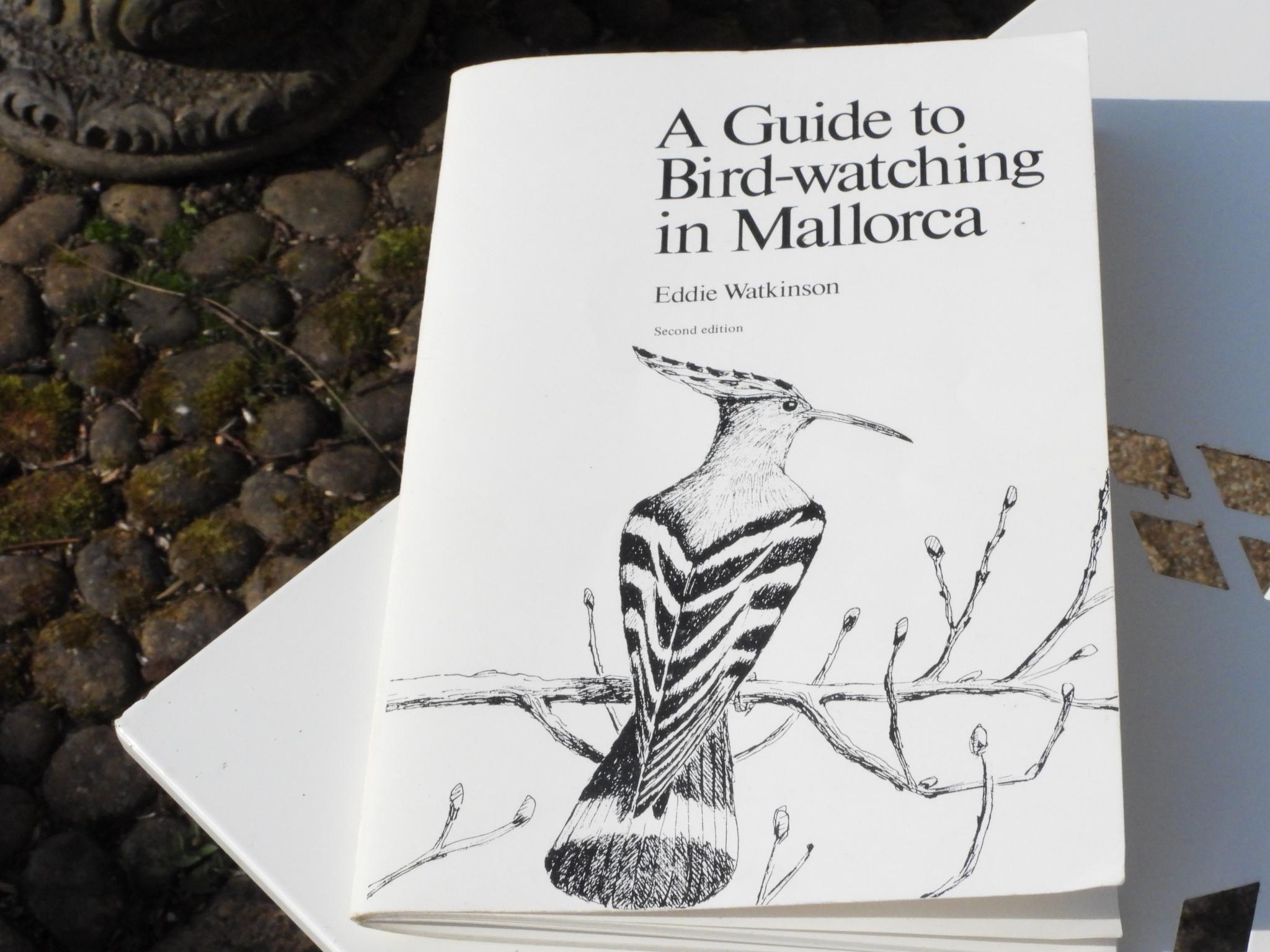 The behind the scenes pioneering work continued, and the Albufera was declared a Natural Park on January 28th 1988 and officially opened as a ‘parc naturel’. This was a momentous day, attended by civic dignitaries, members of the British Counsel and other distinguished guests. Even a television company was present for the opening. ‘Can you imagine the elation that Pat and many others must have been feeling that auspicious day? So much work had gone on to secure the area as a natural park, and possibly thoughts of how did we achieve such a momentous task’? would have gone through their minds. Well achieve a momentous task they did’, and the Albufera now thrives as a nationally important reserve.

Next week we will learn more about the sterling work, some key figures who visited and the ongoing support form Pat’s family.