There was a saying some decades ago that many men’s idea of a heavenly life would be an American salary, an English house, a Japanese wife and a Chinese cook. On paper, that could be an extremely good recipe for a happy existence.

I especially like the idea of having my meals done by a Chinese cook. And not because he (or she) would make splendid Chinese dishes for me. It’s because I think the Chinese are the most versatile cooks — they can handle the finest and fragile of fish dishes, as well as robust beef stews.

When I had the €23 tasting menu at the newly reopened Made in China restaurant, the fish course was a visual master lesson in how to cook and serve a sea bass, lubina in Spanish. 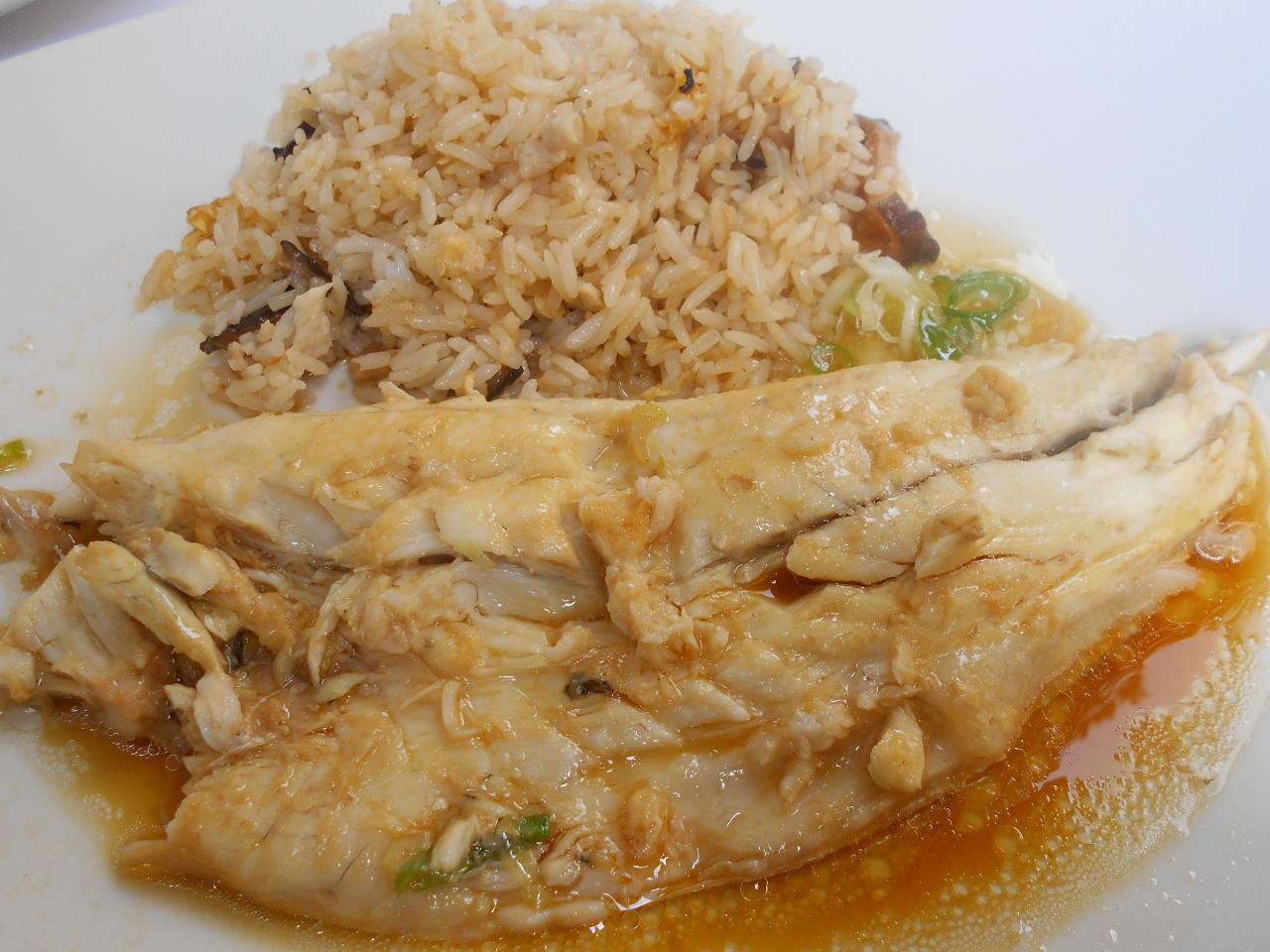 In the picture of the lubina as it left the kitchen, you can appreciate the cook’s artistry in presentation: the butterflied lubina is shown skin-side up under a colourful mesh of thinly shredded veggies. The eye appeal is superb.

I would have been happy to tackle this lubina exactly as the cook presented it. I would have picked at the veggies with chopsticks and thoroughly enjoyed their al dente crispness.
Chopsticks are ideal for pulling the skin off the flesh and that’s what I would have done next — and eaten it. I always eat the skin of fish, some meats, and most fruits and vegetable because more often than not that’s where a great deal of nutrients are stored.

But Made in China is an up-market restaurant and owner Sandra fillets the lubina, which is how the majority of her clients prefer it. It certainly makes for easier eating. And, in this case, it was also delightful eating. 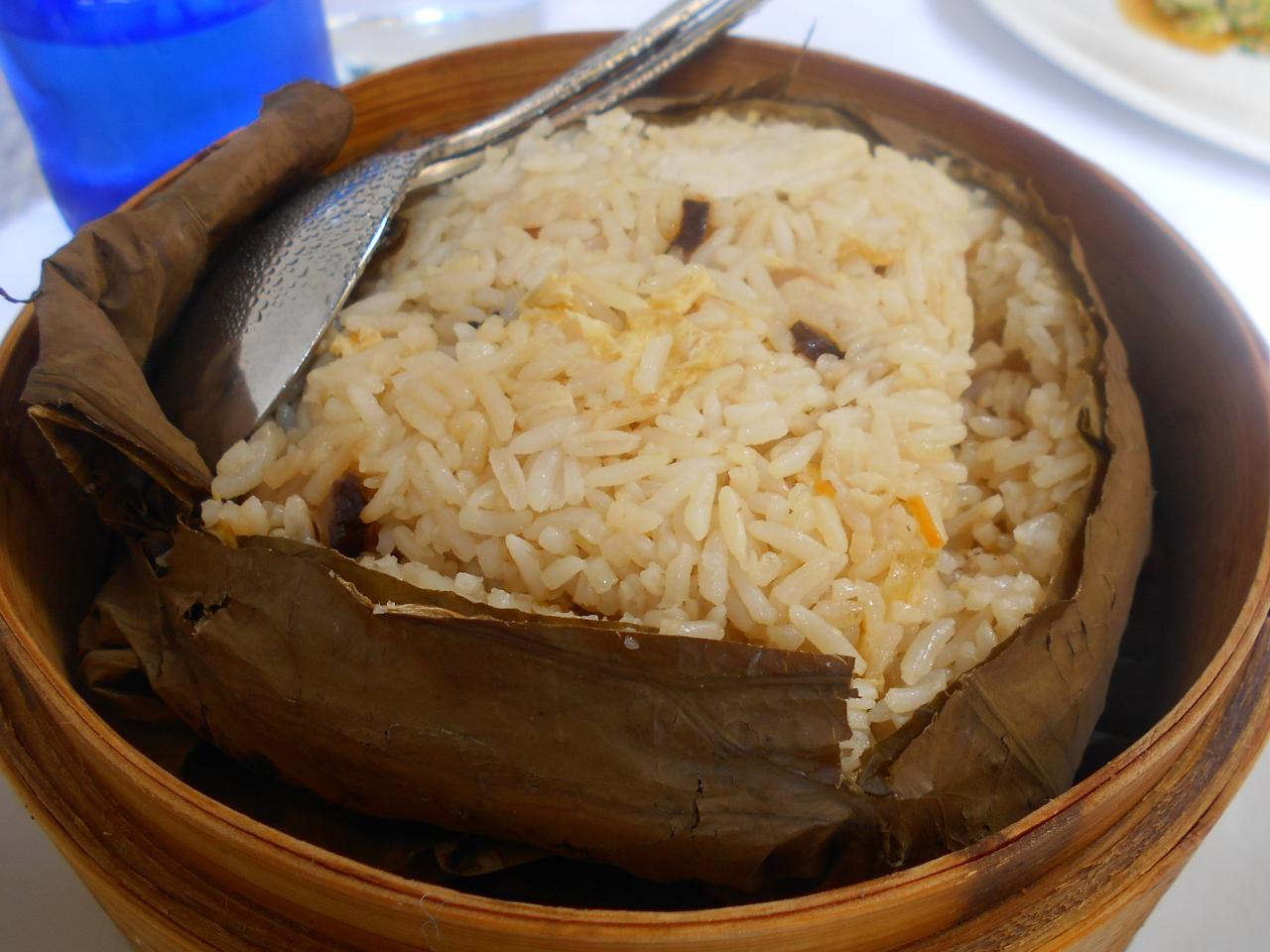 The flesh of the lubina is thick and abundant but it needs careful cooking so that it remains juicy and flavourful. It’s all too easy to overcook lubina and spoil it. That didn’t happen here. The cook knew exactly when to cut off the heat and send it to the table.

Plenty of subtle pan juices kept the lubina fillets well lubricated on the plate, so this was a succulent piece of fish from the first bite to the last.
I would never serve steamed rice with fish unless it were actually cooked in a generous amount of sauce. But this lubina was so moist it paired nicely with the rice.

It helped that the long grain rice was wrapped in lotus leaves and was perfectly cooked. This was rice as only the Asians do it: soft, light, every grain totally separate from the others. It was the ideal foil for this scrummy fish and their pairing was spot on.

Soya sauce straight from the bottle is coarse, much too salty and highly overrated on the Asian table. But at Made in China they temper soya sauce with rice vinegar and Asian spices and produce a most delish concoction that is ideal for the dim-sum. We kept the little dish of sauce and used some of it on the rice and that was another lovely pairing.

This was one of those dishes (there are few of them) in which two components are so perfect in their own right that I just have to make it a double-10 rating. I wish there were more of them.

This is dim-sum cuisine at its best

The delights of Chinese food are many and a visit to even an average kind of Chinese restaurant is always a culinary adventure for me. I never tire of their crisp wok-fried al dente vegetables and their well cooked steamed rice. The rice would be overdone by all other culinary criteria, but is absolutely perfect for serving with Chinese and other Asian dishes.

I am also very much hooked on dim-sum, the Chinese version of French hors d’oeuvres, Spain’s tapas or the Italian bruschetta. 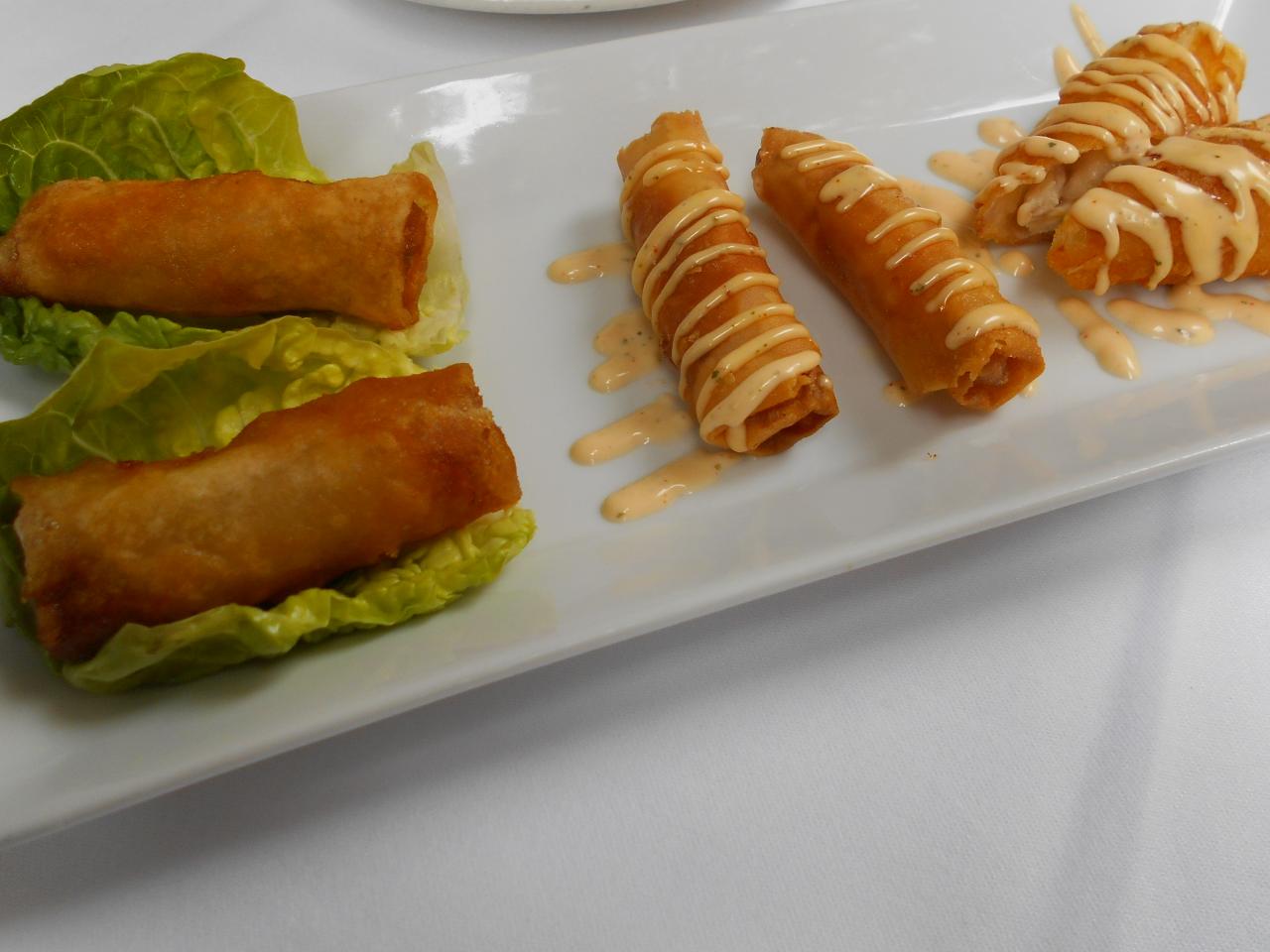 The dim-sum word means ‘so close to the heart’ and it is a Cantonese speciality that became known in the West because Cantonese cooks (being so close to Hong Kong) were the first to emigrate to a new life in the United States and other parts of the world.
At one time the Cantonese had special teahouses at which only dim-sum were served during the morning and the afternoon (but never for dinner at night) and where the only drink was tea.

Manhattan’s Chinatown used to have a couple of dim-sum teahouses (and perhaps they still exist) but I have never heard of specialty dim-sum outlets anywhere in Europe — not even in London’s Soho.

There are three main types of dim-sum: steamed, fried and deep-fried. The ubiquitous spring roll is a dim-sum, and the most famous one on the five continents. At Made in China we had steamed and deep-fried ones and, as always, they were excellent and are among the best you will eat in Majorca.

The €23 tasting menu is great value and is an economical way of eating Peking style roast duck wrapped in pancakes with shredded spring onions and a succulent sauce.
When you have an à la carte version of this dish, owner Sandra carves the duck at table and the snippets of meat are rolled up in the pancakes with slivers of spring onions and then drizzled with the sauce. 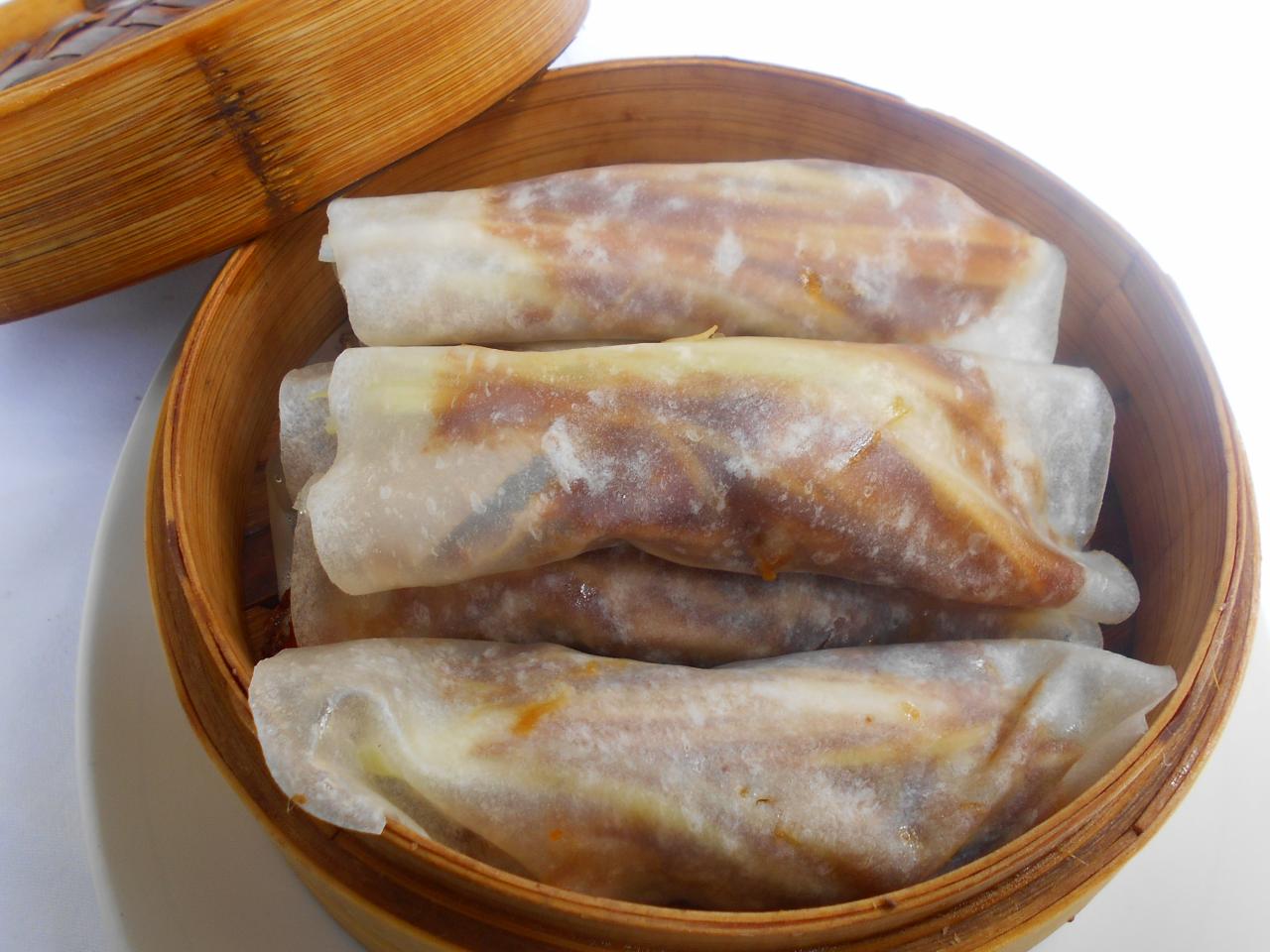 But for the half duck of the tasting menu, the stuffed wraps come to the table in a steamer basket, as you can see in the picture. Chinese people would pick them out with chopsticks and eat them like that. I prefer to pick them up with my fingers. A couple at a nearby table were using a knife and fork. Either way, these were scrummy roast duck wraps.

Made in China is Palma’s most elegant Chinese restaurant and everything connected with the cooking and service of the meal is in consonance. Their dim-sum, either deep-fried or steamed, are among the best I know of and they always get the meal off to a lovely start.

This was the first time I’ve had one of their main course fish dishes, and the moist fillets of sea bass with the exquisite long grain rice steamed in lotus leaves were most impressive. The rice was among the best steamed versions I have ever had.

This was one of the few double-10 dishes I come across on my weekly visits to restaurants. If you have still to try Peking roast duck wrapped in pancakes with shredded spring onions and sauce, this is an economical way of being introduced to it. Don’t miss it. 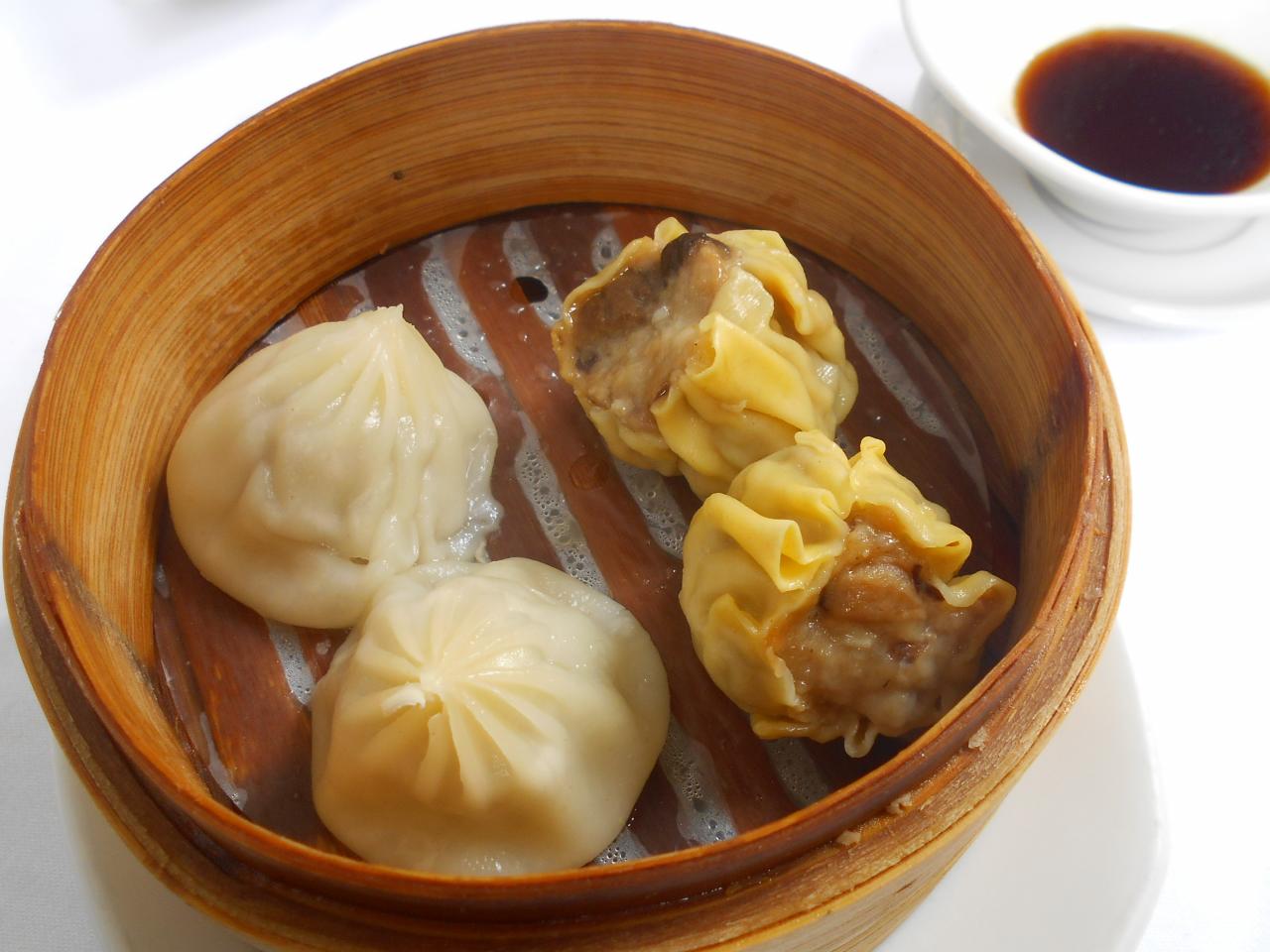 The €23 tasting menu includes three kinds of deep-fried dim-sum and two steamed ones, steamed rice wrapped in lotus leaves, a fillet of sea bass, half of a Peking style roast duck served in five pancake wraps with sauce and shredded spring onions, and ice cream for dessert, or coffee. Drinks are not included.