In my 30-odd years of reviewing restaurants I have seldom complained about the work of the waiters and waitresses I have come across. Some 99.99 per cent of them work extremely hard — they are on the go non-stop and the waitresses never stop smiling.

It’s a job I couldn’t do and I’m a great admirer of the 99.99 per cent who sometimes work so hard in adverse and stressful conditions to help make our meal an enjoyable one.
No restaurant can be a success without dining room staff who are really on the ball and working full out to make everything run smoothly.

There’s another reason why the dining room must be in the hands of competent and conscientious workers: at most Mallorcan restaurants one of the waiting staff (not a head waiter) is the first person you meet on arrival and the last you see before you leave.
If they are not doing their job properly the meal begins and ends badly: an almost certain way of ensuring those customers shan’t return.

However, I sometimes come across the one waiter in 10,000 (it’s never a waitress) who isn’t doing a good job — and he was very much in evidence at today’s restaurant.
He never smiled once during the time we were there. And not just to us: people at other tables also went without a single smile.

And what a slow coach he was. I cannot remember any occasion in the decades I’ve been eating in restaurants when a waiter moved as languidly as this one.

We had been sharing dishes and eating from side plates, both of which had been used for a piece of fried cod and also deep-fried squid. When he brought a main course fettuccine I asked for clean side plates.

Moving as always at the pace of a giant tortoise, he took so long to bring the plates that I eventually went into the dining room (we were eating on the terrace), held out my right hand and snappily asked for two plates, por favor.

The plates were right by his side on the counter and he picked up two and insisted on taking them out to the table. It would have been so easy for him to have dashed inside and brought out the plates when I first asked for them. But I am sure he has never dashed anywhere in his young life — certainly not during working hours.

The pasta dish we had is on the menu as spaghetti alla bolognese, a dish you’ll find in every country in the world — except Italy. The bolognese sauce, or ragú as the Italians prefer to call it, is always served with tagliatelle. 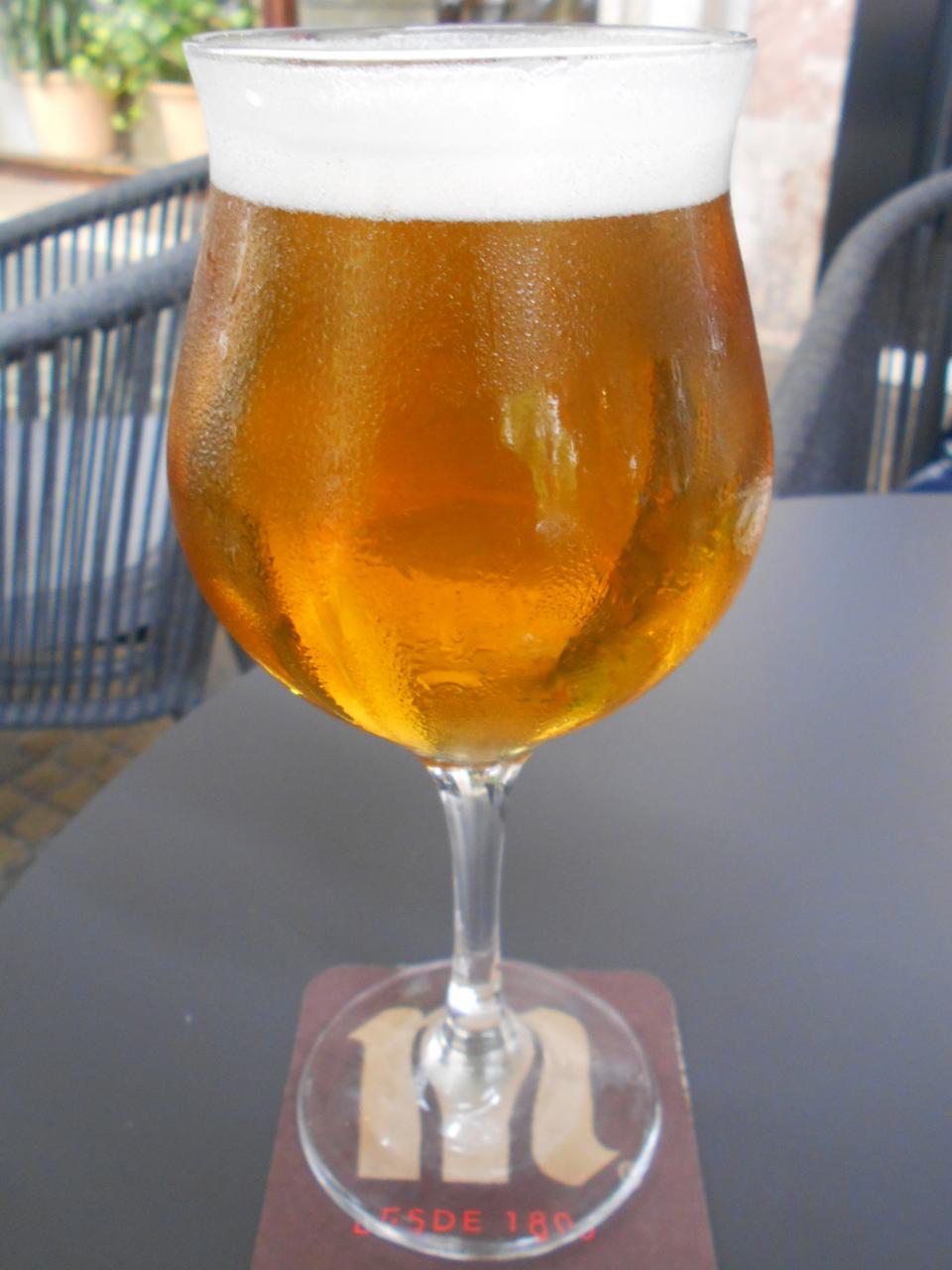 Why is this Italian restaurant serving a ragú sauce on spaghetti? In fact we didn’t get spaghetti (although that’s the dish on the menu), we had fettuccine on our plate. At least that’s a flat pasta like tagliatelle, but for Italians it’s not broad enough to take a take the hand-cut meat of a proper ragú.

Although Italians do not like their pasta (of any kind) to be inundated with the sauce (and neither do I) this fettuccine was incredibly dry.

There was nicely cooked tender chopped meat on top, but nothing that resembled a sauce. That’s a huge mistake.

The deep-fried rings of calamares were superb

This meal would have been a disaster but for some excellent deep-fried rings of squid and a nicely made ‘budin’ (a Spanish spelling of pudding) with lemony flavours. 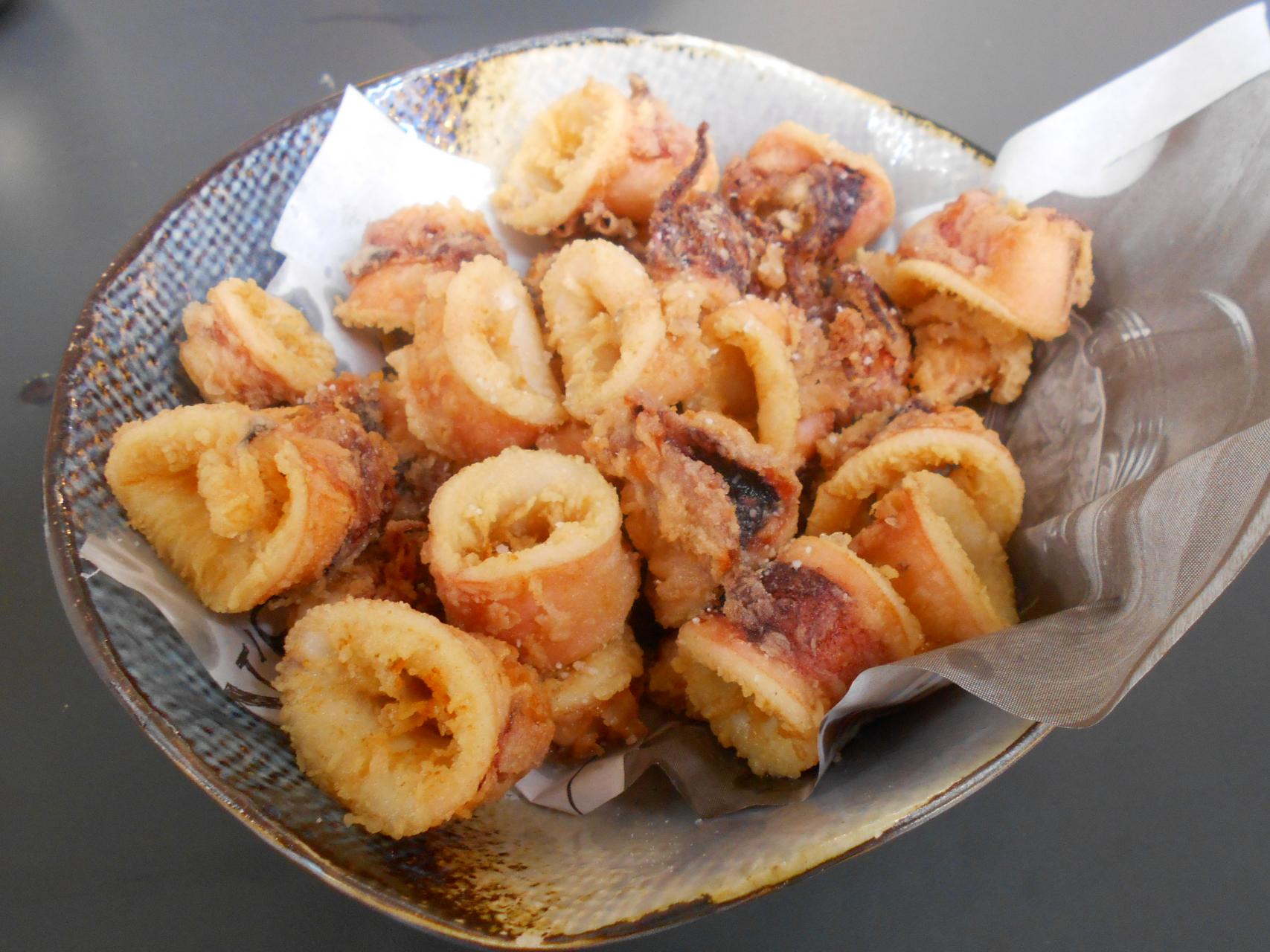 The Italians are one of the six nations who do superb deep-fried food. You only have to think of their fritto misto di mare to realise how expert they are.

We had two components of a traditional fritto misto di mare — a tiny nugget of fresh cod as well as the squid rings — and both were proof that someone in the kitchen is a dab hand at deep-frying fish.

The squid dish was done with small calamares sliced into broad rings and floured before deep-frying. In an Italian fritto misto di mare the fish can be floured or done in batter.
In Andalusia they also dip fish and shellfish in flour before deep-frying them, which is why the rings of squid are on the menu as calamares andaluza.

The portion of calamares was a generous one and they were beautifully deep-fried, which meant they were tender and free of residual oil. A tapa of cod in tempura was also very nicely deep-fried: slightly underdone and extremely juicy. But it had an unforgivable fault: it was a miserly piece of fish and it was priced at €8. An absolutely scandalous price for such a tiny piece of cod. 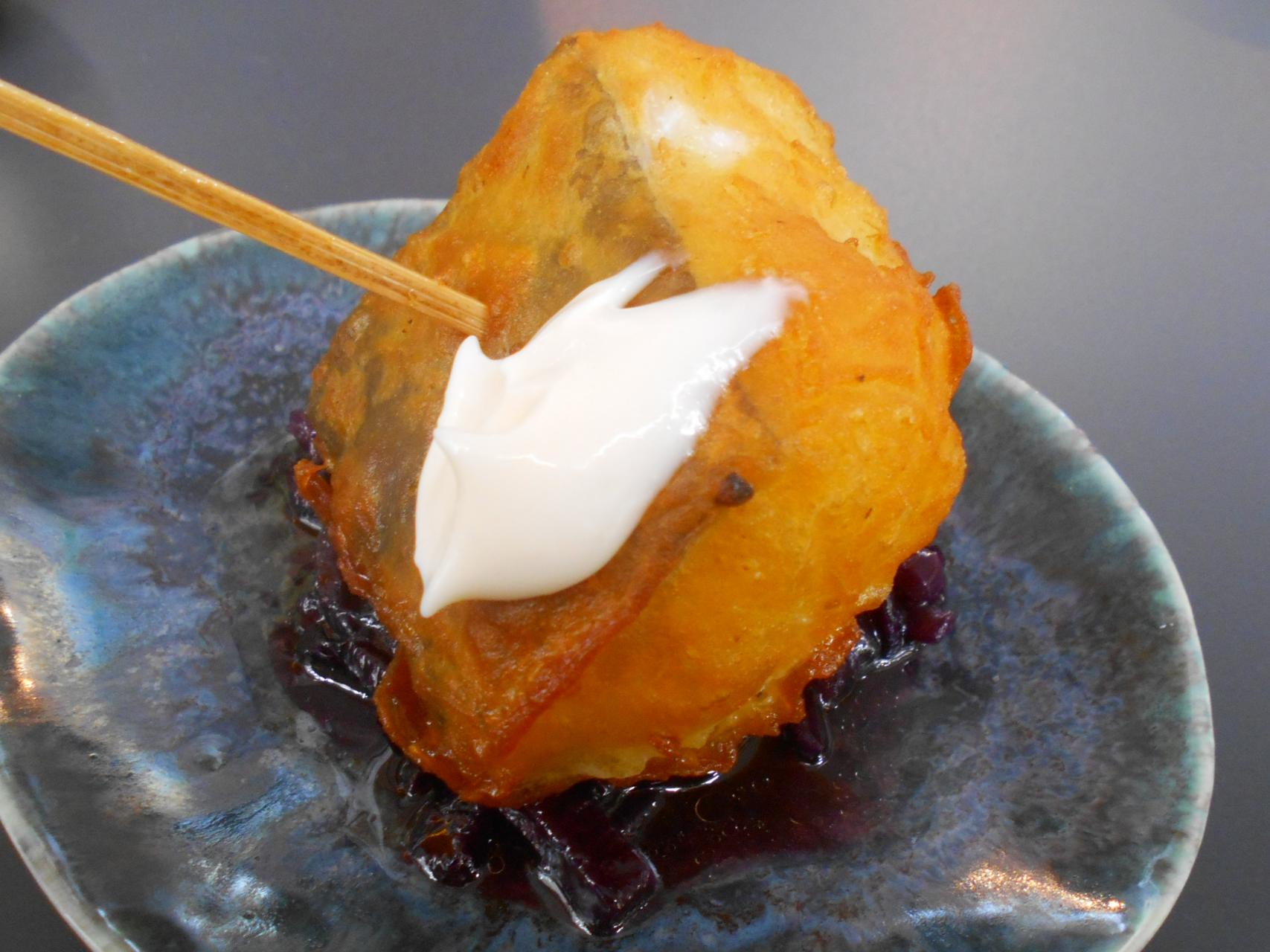 It wasn’t even salt cod (which is expensive) and even if there had been two pieces of that size the price would still have been totally abusive and unacceptable.

Someone should tell the owner that no Mallorcan, Spanish or foreign resident, having been served such a paltry piece of fish for €8, would ever return to his restaurant — and neither would any tourist. They also know when they are being ripped off.

The calamares and that mingy bit of cod were actually in the running for a 10-rating. But when I give a 10 everything has to be perfect and that includes the size of the portion, the price and the way the dish was served. I take half a point off even the finest dishes if the basic service (I don’t need any frills) isn’t up to scratch. And if it’s not good value for money it doesn’t stand a chance of a 10-rating.

This was a disappointing meal because there were too many things that went wrong — and it wasn’t just the slow-coach waiter, although he was bad enough: no smiles, uncooperative, and listless from start to finish. When the fettuccine we were sharing came to the table I asked him to change the side plates where we had been eating fish. It would have been so easy for him to turn round, walk five steps to the dining room counter, pick up two plates and bring them back. 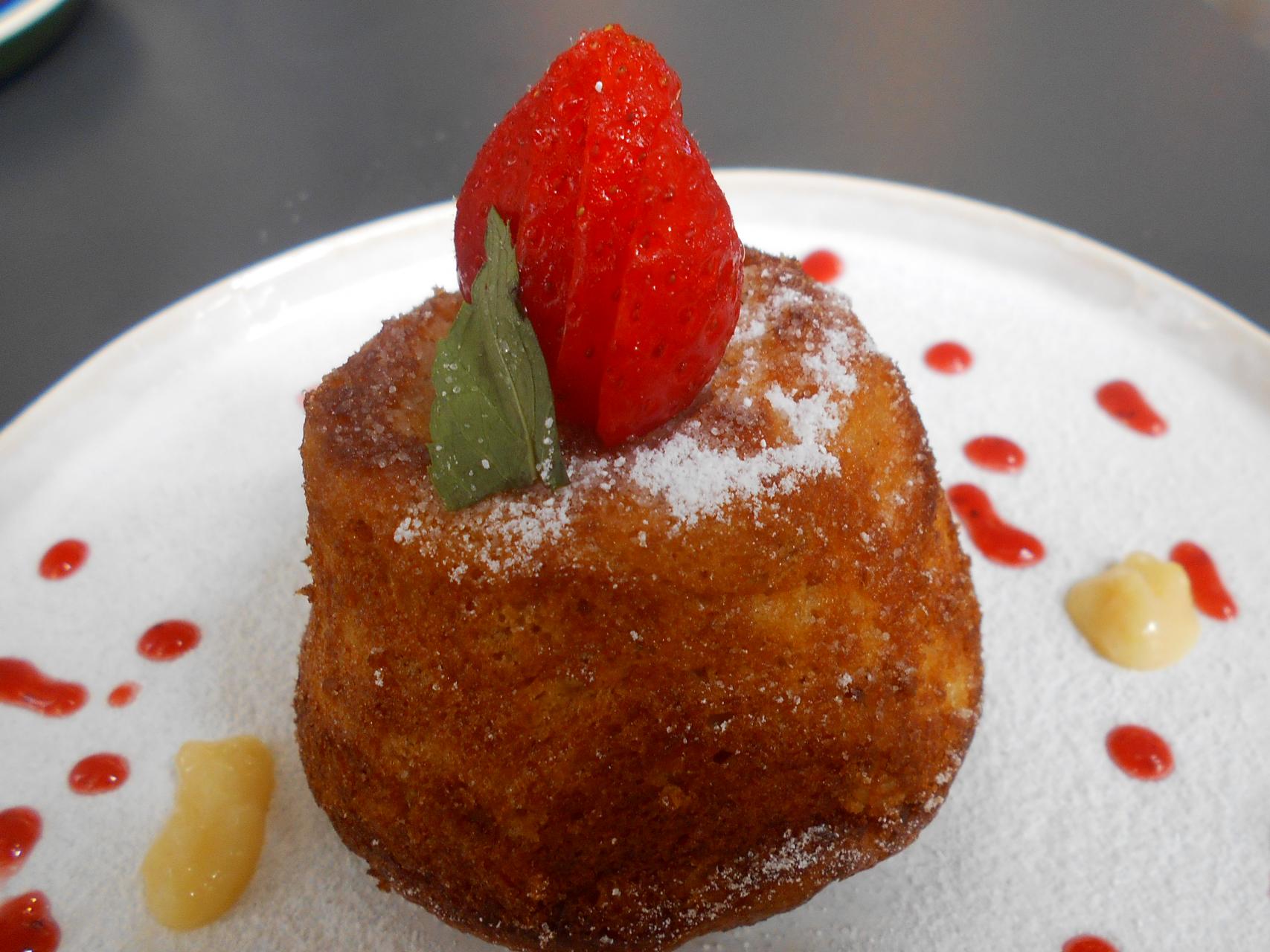 But he didn’t do that and eventually I had to go into the dining room and ask for two plates. He’s the kind of person who creates problems where none exist. The fettuccine with ragú, which was at room temperature by the time the waiter brought the plates, was not a good version.

The meat was tender enough but it lacked sauce and was extremely dry. The calamares andaluza, small squid cut into broad rings and deep-fried in the best Italian tradition, were very good and the portion was a generous one. Quite the opposite of the miserly tiny piece of cod in tempura that cost €8.

Restaurante Ama, Paseo Mallorca 18, Palma. Tel:971-291895. Open every day for lunch and dinner. They have a terrace and an interior dining room so there should be no difficulty in getting a table if you go early. But it’s always safer to make a reservation.