In the Sixties and long before that, the end of summer came round like veritable clockwork: a couple of days before or after August 28 there was a big thunderstorm, then we had a repeat two or three days later — the temperature plunged and we went straight into autumn.

This highly reliable change in the seasons was noted in local sayings, with the height of summer and its end having a reference to two prominent local saints’ days.

The really hot summer, for most Mallorcans, didn’t start until July 20, the day of Santa Margalida. And it came to an end on or after August 19, which was Sant Bernat’s day.
The traditional saying is that the nun (Santa Margalida) starts the fire of summer and the monk (Sant Bernat) puts it out.

That was in the old days. But eventually we had global climate change (although in the beginning we called it global warming) and the thunderstorm that brought summer to an end started to arrive later…and later…and later.

We were soon experiencing spring-like conditions until the end of October. After what seemed like a short time, the first spell of cold rainy weather didn’t start until around November 15.

In 2015, however, we didn’t get really cold weather until mid-December. And that turned out to be a false alarm…four days later we were again having lovely spring-like days.
On Friday and Saturday of last week we had heavy rain (but without thunder and lightning) and the temperatures took a dive. On Saturday I was wearing a winter jacket and at the office I had a hot chocolate — the first one I have ever made at the office.

At the time of writing I am wearing sweater at home (for the first time this autumn) and I will be making another hot chocolate soon after I get to the office.

And yesterday I bought potatoes. carrots, sweet potatoes and turnips and I’ll be having them mashed with butter to accompany morcilla de Burgos (Spanish black pudding with a rice filler) and also fresh Argentinian-style criollo chorizos.

There’s still plenty of time for a meteorological relapse, but I’m making the most of this bad weather break and I’m going into winter culinary mode. And that, among other things, means root veggies.

I am especially fond of root vegetables in cold weather specials such as hot-pots, casseroles, stews, thick soups and bean dishes. But it’s not cold enough for dishes of that calibre, so for the next couple of weeks or so I’ll mashing root veggies with butter, herbs and spices and serving them with roast chicken or lamb. 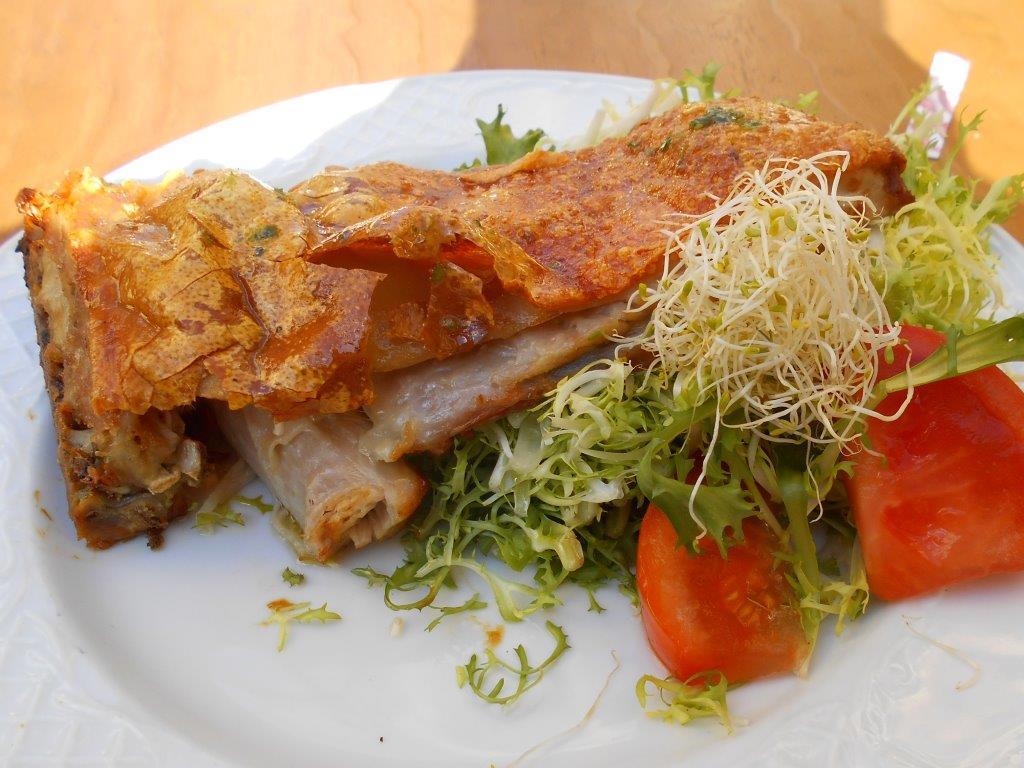 I shall also be rediscovering the delights of mashed root vegetables as a starter in their own right, a favourite French way of doing them.

The beauty of winter vegetables mashed and served in this way is that we can fully appreciate their texture and taste.

When doing root vegetables for serving as a purée, most cooks simmer them until tender and then add butter and herbs during the mashing.

But as root vegetables already contain a good deal of water, it’s better to sauté them slowly in butter so that as they cook they also lose some of their water — that way all the flavour stays with the vegetable.

When vegetables are simmered, even for just a short time and in a small amount of water, some of their taste goes into the water. Root veggies sautéed in butter or virgen extra olive oil will always have more flavour.

Further layers of aromas and taste in the form of more butter or oil, plus cream, herbs and spices, turn mashed veggies into something very special.

When turning cooked root veggies into a purée, reject your blender and food processor and use a vegetable mill instead. Blenders and processors are inclined to turn cooked vegetables into baby food completely lacking in texture.

The bigger root veggies such as potatoes or yams can de diced small and sautéed in butter before being mashed, but best of all is to bake them unpeeled when you are roasting a chicken, leg of lamb or some other meat that needs an hour or more in the oven.

I sometimes roast a leg of lamb on a bed of thickly sliced sweet potatoes, the orange boniatos available at every market stall and supermarket. I generously drizzle them with virgen extra olive oil and sprinkle on Provençal herbs, a little dill, oregano and tarragon.
During the 50-minute roasting time they also soak up some of the juices from the lamb. They have such a beautiful taste they don’t need any extra flavourings. 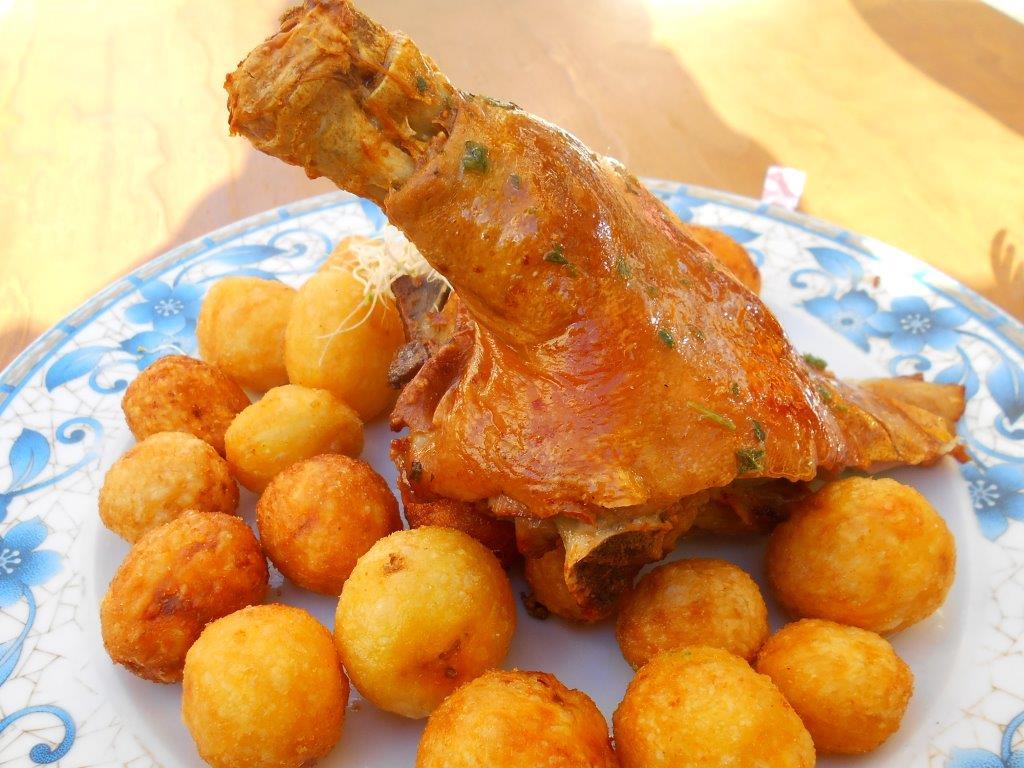 I usually wrap in tinfoil extras slices of boniato seasoned with herbs and drizzled with virgen extra olive oil and bake them at the same time to be used for another meal. That’s good economical use of the lamb’s 50-minute roasting time. You could also bake some potatoes and stuff them.

You will need: 4 large baking potatoes, hot liquid cream, 6 tbsps soft butter, 2 egg yolks, 3 tbsps snipped chives, 3 tbsps melted butter and salt and pepper to taste.
Scrub the potatoes, prick them with the point of a sharp knife and bake them for an hour in a separate dish at the same time as you are doing a roast.

Halve the potatoes lengthways, carefully scoop out the flesh into a bowl, and reserve the six best skins.

Mash the potato pulp with a heavy fork and add the softened butter, egg yolks and enough warm cream to give a thickish consistency.

Mix in the snipped chives plus salt and pepper to taste. Turn over with a fork until everything is well blended and spoon the purée into the six potato skins.

Transfer the stuffed potatoes to a buttered oven dish just big enough to take them in a single layer. Brush the tops with melted butter and bake for 15 minutes or until the surface is a nice golden colour.

This is an elegant potato stuffing that can be served as a starter for lunch or dinner, or used as a side dish when serving a roast, grilled steaks or chops.

Carrots, which always add a lovely splash of colour to a meal, have an affinity with mint and we should make a point of using them together. One way of introducing them to each other is in this simple purée.

Peel the carrots, chop them roughly and sauté gently in the two tablespoons of butter for 10 minutes. Barely cover them with boiling water, stir two teaspoons of the chopped mint and simmer, uncovered, until the water evaporates and the carrots are soft.

Mash them with a heavy fork or put them through a vegetable mill into a suitable bowl. Add enough hot cream to make a thickish consistency and mix in the softened butter and salt and pepper to taste.

Stir until well blended and transfer to a hot serving dish. Mix the chopped parsley and the remaining mint and sprinkle over the surface.

Parsnips have lots of texture and flavour, yet very few people eat them. I know only two housewives who make them on a regular basis.

A parsnip purée, flavoured with ground ginger or finely chopped fresh root ginger, is the ideal way to discover the delights of this neglected veggie. 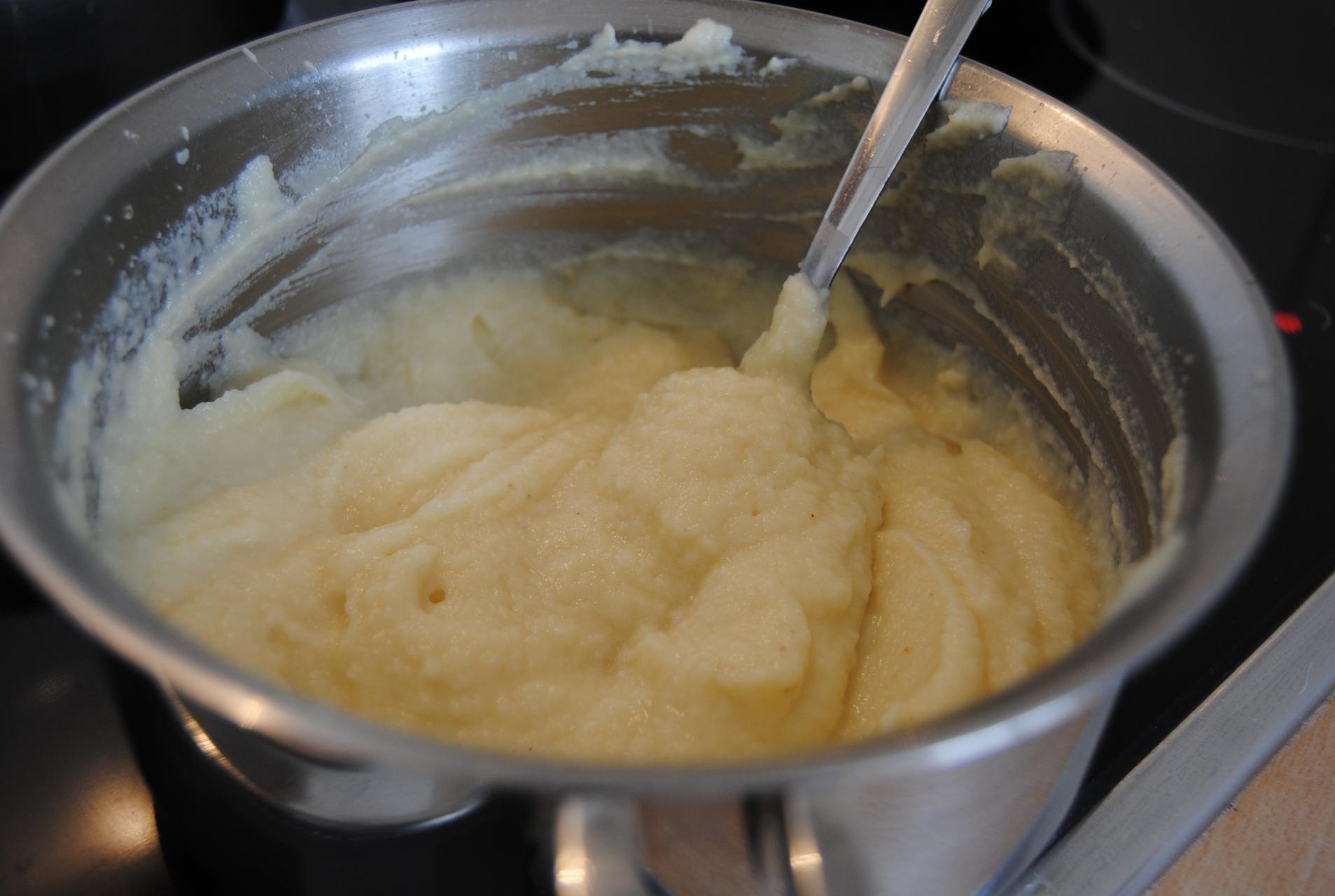 Peel the parsnips and cut them into one-inch pieces. Peel and quarter the potatoes. Cook them in the same boiling water until they are soft.

If using finely chopped fresh ginger root, add it to the simmering water five minutes before the vegetables are ready.

Drain the vegetables and put them through a vegetable mill or a potato ricer into a suitable bowl. Add enough hot cream to give a thick consistency and stir in the butter and salt and pepper to taste.

Stir the mixture well and transfer to a well heated serving dish and sprinkle with the finely chopped parsley. Turnips always contain a good deal of liquid, no matter how we cook them and it must be squeezed out before we turn them into a purée to be served as a starter or with roast or grilled meats.

Steam the peeled turnips or simmer them in a tiny amount of water until they are tender. Put them through a vegetable mill into a suitable bowl.

If the turnips still contain a lot of liquid, tip them into a sieve and gently squeeze out the excess liquid with the back of a spoon.

Put the cooked rice through a vegetable mill into the same bowl as the turnip purée. Add enough hot cream to make a thick mixture and stir in salt and pepper to taste.

When everything is well mixed, transfer the purée to a gratin dish, make the surface smooth with the back of a spoon and sprinkle over the grated gruyere and the parmesan, Put the dish under a preheated hot grill until the surface is a deep golden colour.

There are two vegetable stalls at the Santa Catalina market that usually have large white turnips and if you are making any kind of dish that features turnips you should get them there. You can combine this visit to the market by stocking up on fresh herbs in pots, on sale at the only big floristry stall.

Celeriac is another of the neglected root veggies and turning it into a purée is a simple way of rediscovering it. Mashed celeriac makes a delightful dish as a starter and can be served with grilled fish, chops and steaks.

Cut the celeriac into thick slices and trim off the rough skin. Chop roughly and simmer in a small amount of water until soft. Mash with a heavy fork and add half as much mashed potatoes.

A celeriac purée should be well flavoured with herbs and spices of your choice and the consistency should be firm but creamy. Try it with a touch of finely chopped fresh ginger or a sprinkling of ground ginger to taste.

Root vegetables have good amounts of fibre and are packed with essential vitamins and minerals that help to keep us in fine health during the winter months.

When plainly boiled they are low-cal, but we usually eat them with other ingredients that pile on the calories. Cream and butter are used in today’s recipes and that always increases the calorie count.

If you are interested in eating extra fibre, go for parsnips (4.6 grs per 100 grs), celeriac (3.2 grs), carrots (2.4 grs), beetroot (1.9 grs), swede (1.9 grs) and turnip (1.8 grs).
These puréed root veggies are always suitable as a starter but they are also superb with grilled or roast meats. I once served three of them (potatoes, carrots and celeriac) with a whole roasted piece of beef fillet and the meal was a huge success. It’s an extra special dish for one of the 12 days of Christmas…which will soon be here.