U.S. super-model Emily Ratakkowski is enjoying a holiday on the island as a world media frenzy follows her every step after being linked with Hollywood super-star Brad Pitt. In a post on her instagram site she says: "Today I brought my beautiful baby back to Sant Juan, the town where I spent every summer of my childhood. As I walked Sly around this lovely man pulled over in his car and came up to me holding Mi Cuerpo (my book in Spanish!) He told me that him (he) and his daughter have read it. Talk about a full circle, universe coming together, magical moment. I am so grateful for this life!" 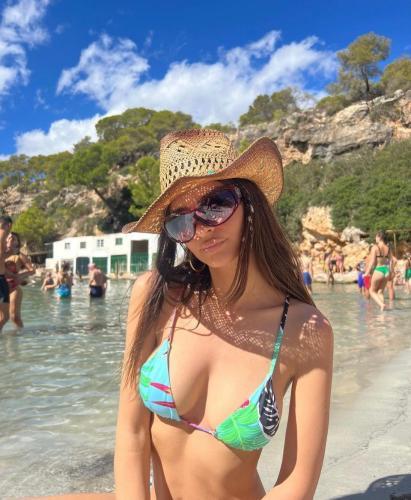 Ratajkowski's feature film debut was as the mistress of Ben Affleck's character in the film Gone Girl (2014). Her other roles include the films Entourage (2015), We Are Your Friends (2015), I Feel Pretty (2018) and Welcome Home (2018), as well as the miniseries The Spoils Before Dying (2015) and the anthology series Easy (2016). She appeared in the 2014 and 2015 Sports Illustrated swimsuit issues, and made her professional catwalk modeling debut for Marc Jacobs at New York Fashion Week in 2015. She has since walked on the Paris Fashion Week runway for Miu Miu and Milan Fashion Week for Bottega Veneta, Dolce & Gabbana, and Versace.

On her possible romance with Brad Pitt, Cosmopolitan magazine said: In a classic case of “are they or aren't they?!?!” Brad Pitt and Emily Ratajkowski are truly keeping us on our toes, wondering whether or not they are *actually* dating in the chaotic year that is 2022. And to make matters more complicated, a source just confirmed to Page Six that even though the duo has been out a number of times together, they're not officially dating... but fans should “stay tuned.” Color me confused!"

She posted numerous photos on her instagram site of her Mallorca holiday.