The lure of Chinese sweet and sour pork

A though the lunar new year is not part of the western world’s culture, it has a great attraction for those who delight in the pleasures of Chinese cooking — this time of the year is a good excuse for partying at a Chinese restaurant.

Tuesday is the first day of the Year of the Tiger and in Palma’s Chinese community the festivities will start on Monday night — the equivalent of our New Year’s Eve.

This year, in order to say something in the review about lunar new year dining, I had to go for a meal in advance of the actual date. That, of course, is no hardship, especially as my choice of restaurant was Hemudu where I have always eaten memorable meals.
Hemudu has some superb dishes at under €8 and those who go in groups of six can eat fabulously well and at a reasonable cost because portions are generous.

But when two people are eating it’s best to order their €13.80 menú (without drinks) — you’ll get one of the best value meals in town. If each person orders different dishes, you eat two starters, a rice and noodles dish, two mains and two desserts. Today’s pictures are proof enough that you’ll get a very nice meal.

Our two starters were spring rolls and deep-fried wonton. The spring rolls, which are always part of a new year meal, were crisp and packed tight with crunchy fried veggies, including bean sprouts.

The wonton are simply squares of thin pastry folded over in a triangular shape (with a tiny amount of filling to provide a little taste) and then deep-fried.

It sounds very easy peasy but getting it totally right is actually quite difficult: the pastry must be very light, absolutely crunchy, without any traces of residual oil and it must come straight from the deep-fryer. These wonton scored well on all four counts.

Noodles of all kinds, another essential dish in lunar new year meals, are one of the basics in Chinese cooking and you’ll seldom go wrong if you order them — at any time of the year.
On the other hand, even the best places can go astray and get it very wrong. Not so long ago, at one of Palma’s best Chinese restaurants, the noodles on the menú del día were cold, partly dried out and more than somewhat oily. A real disaster. 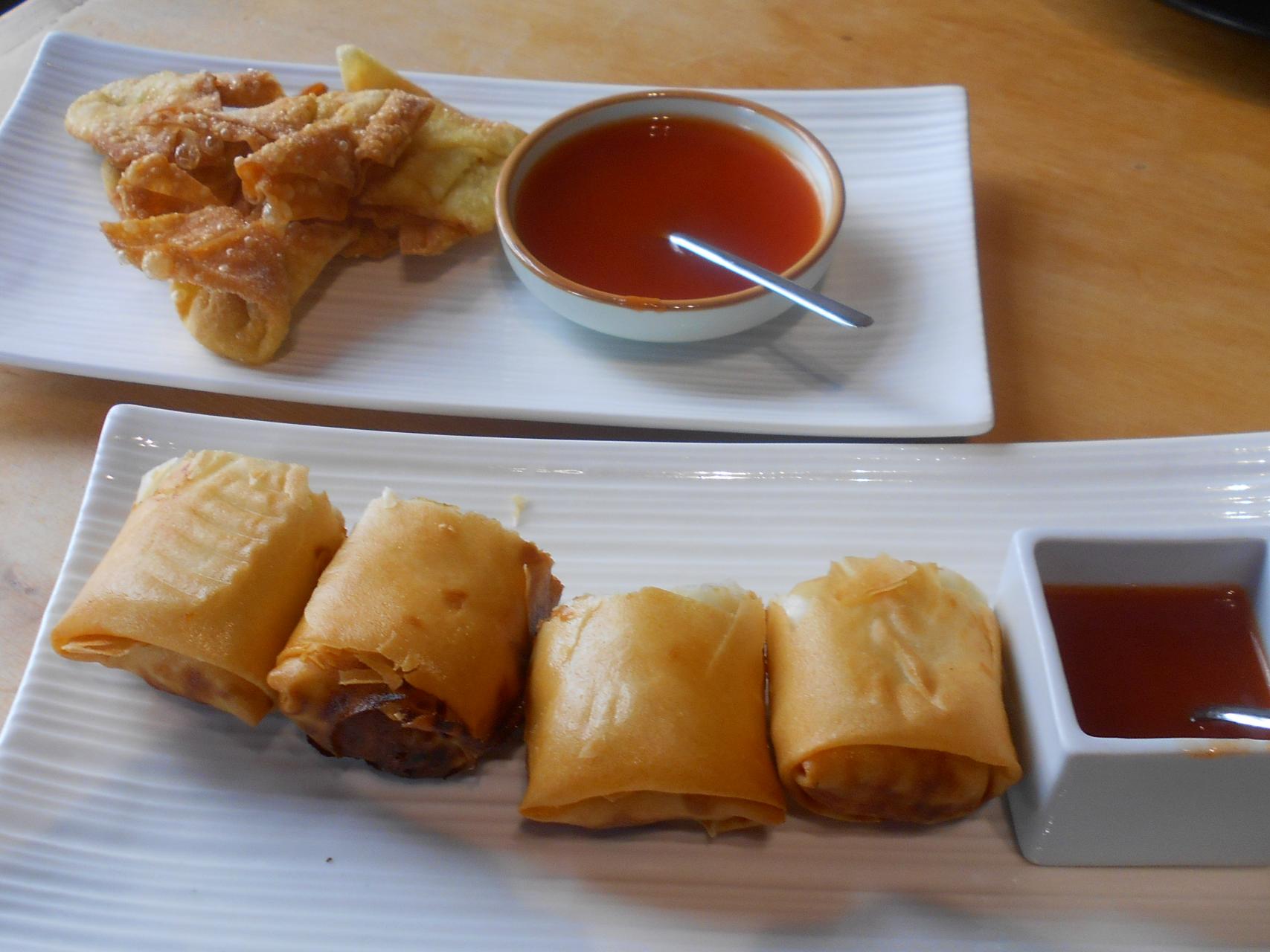 But at Hemudu noodles have always been a huge success, so we ordered two kinds: one with veggies and the other with langostinos.

The Italian concept of pasta and rice being al dente is unknown in Chinese cooking, which means rice and noodles are always cooked through — but never overdone, as can happen in so many European restaurants.

Hemudu’s cooks turned out two dishes of noodles that were light, perfectly cooked and nicely lubricated. We finished them off — right down to the last little strand.

The lure of Chinese sweet and sour pork

My first visit to the Edinburgh Festival was a landmark occasion in several ways. I went to the retrospective Renoir exhibition and fell in love with his painting and also with Impressionism, I had my first ever Chinese meal and at night I was enthralled by Richard Burton in the role of Hamlet.

This deep-fried fish was perfection plus

I was 13 at the time and although that was ages ago, I can remember every detail of that day — especially the sweet and sour pork served atop a bowl of plain white rice.
That was the day I fell in love with Chinese food — and began a life-long affair with sweet and sour pork and crispy spring rolls.

When I went to the 1968 inaugural meal at the Mandarin near Plaza Gomila (Mallorca’s first Chinese restaurant) I shared a table with Lance Callingham and his wife Lynn. 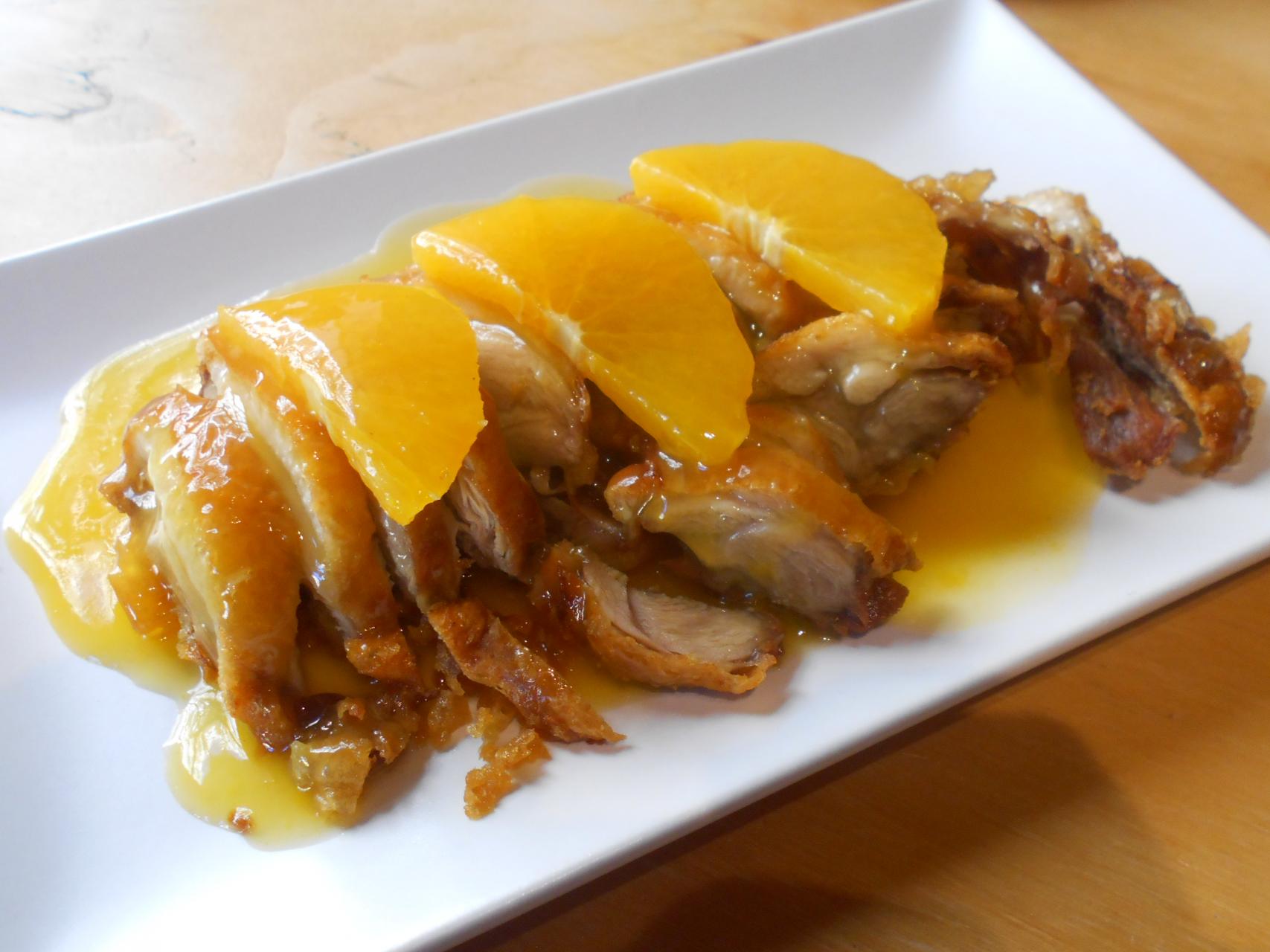 Several of my friends never go back to a Chinese restaurant if either of these two dishes isn’t up to standard — especially the sweet and sour pork.

I think that’s because, like me, they first try the sweet and sour taste with this dish when young, and if they like it then it stays with them forever — and they don’t forgive a restaurant that doesn’t get it right.

These friends would adore Hemudu’s sweet and sour pork because it was a classic version: tender pieces of meat in a superb batter that were lightly drizzled with a sauce that was neither too sweet nor too sour. Lynn and Lance would have enthused over it. And I am sure they, like me, would have given it a 10. 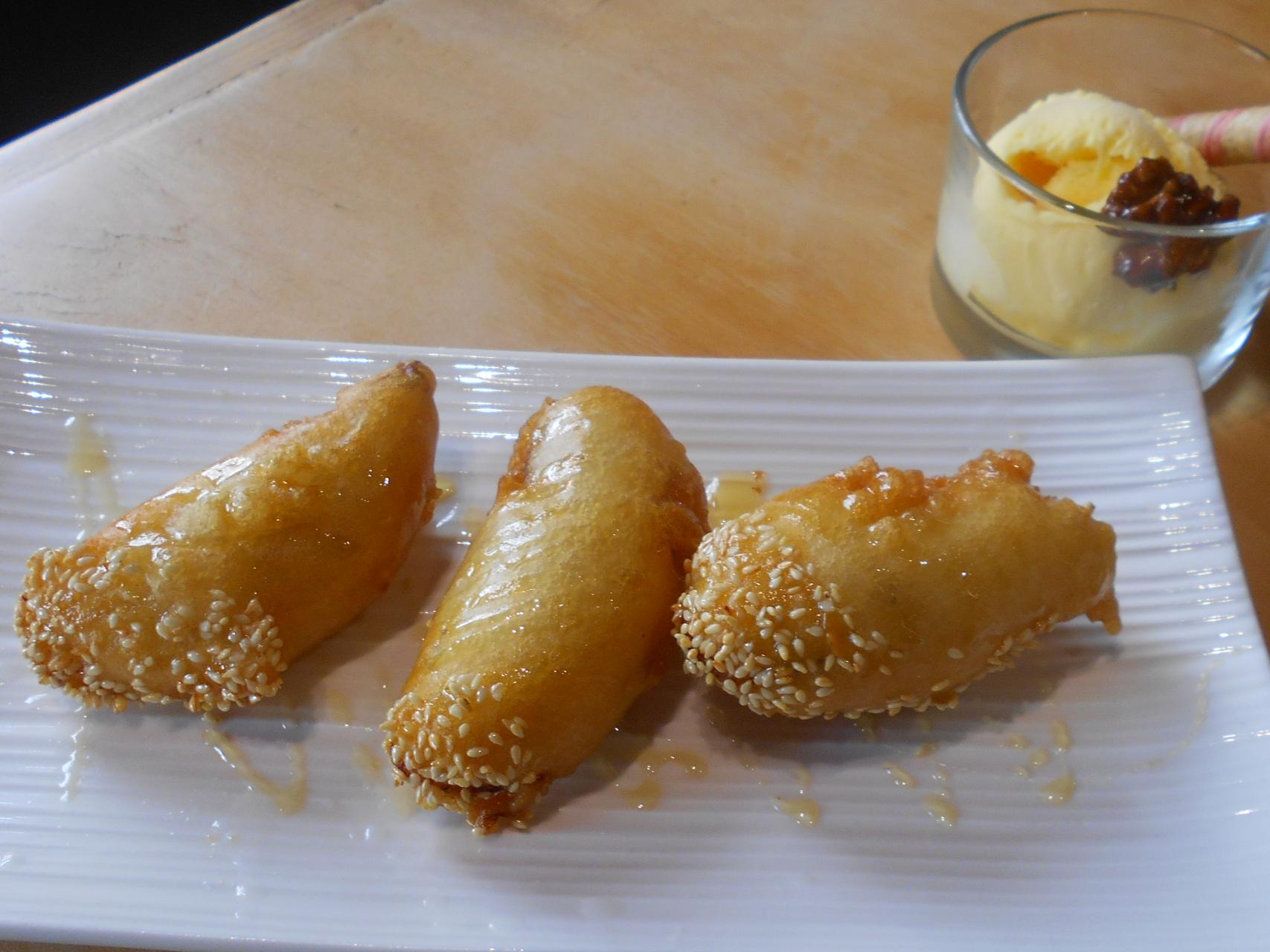 Another mains was also incredibly well done and presented: succulent slices of duck breast with crispy skin and served with a lovely orange-flavoured sauce. Perfect in every way and worth another 10.

Hemudu cooks make a splendid batter-fried banana for dessert. You get three pieces of banana in a delicious coat of smooth batter, drizzled with threads of honey and sprinkled with sesame seeds. The batter was crisp, the banana hot, soft and lush and the honey nicely sweet. It was right in every way and scored another 10. 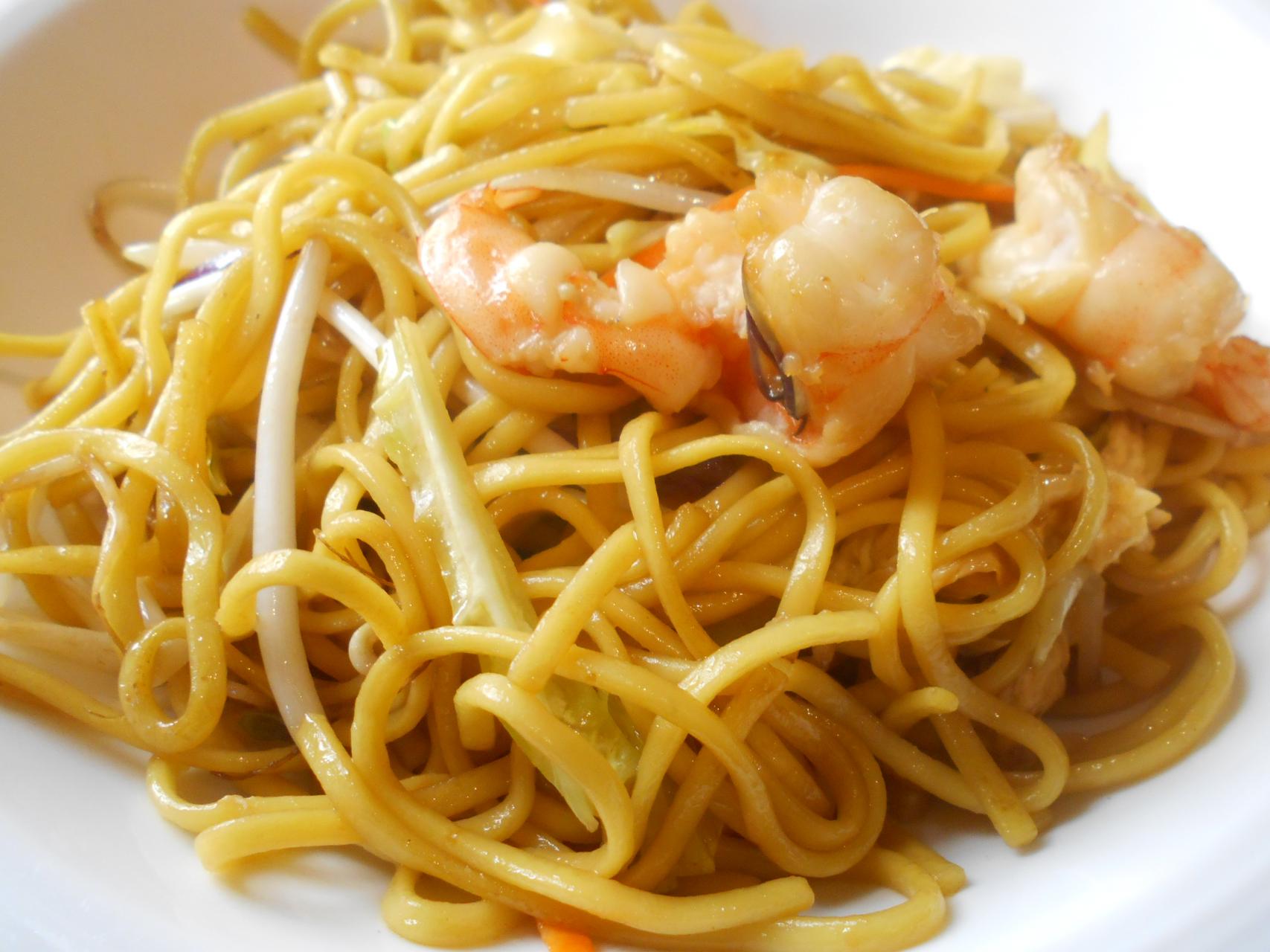 It’s always most satisfying to come across a fixed price menu that is a truly great buy. Hemudu’s €13.80 menú is one of the best in Palma — and perhaps THE finest in that price range. In this week’s menú everything fell neatly into place and the meal was a success from the first starter to the dessert. The deep-fried starters, wonton and spring rolls, were beautifully crisp and with no residual oil getting in the way. Hemudu’s noodles are always rather special, so we ordered two kinds: one with langostinos and the other with slivers of veggies. Both were most enjoyable.

A mains of crisply fried slices of breast of duck with orange was the tops and it was awarded with an immediate 10. If it’s not on the fixed price menu next time I go to Hemudu, I’ll order it à la carte. That’s how memorable it was. The sweet and sour pork consisted of battered-fried slices drizzled with a nicely balanced sauce in the best Cantonese style and was worth a 10. The meal finished in a glorious fanfare with ice cream and walnuts and deep-fried battered bananas drizzled with honey that scored a third 10.

Restaurante Hemudu, Calle Rubén Darío 1, Palma. Tel:971-327902. Open every day for lunch and dinner. This place fills up very quickly at lunch time (the €13.80 price for such a fine meal is a great attraction) so you should always reserve a table.