Good lasagna nowadays is so very hard to find

The authentic Italian lasagna is in danger of extinction in Mallorca and it’s the cooks who are to blame. Lasagnas made a superb debut more than 60 years ago when pizzerias began to open up in the Plaza Gomila area of Palma.

Apart from starting off the pizza craze, these eateries also introduced us to fresh pastas, mainly tagliatelle and spaghetti.

Many of us also discovered for the first time stuffed pasta such as ravioli and tortellini, but perhaps the biggest treat of all was baked lasagna — that was a complete novelty for most of us.

There were two places that did excellent fresh pastas and memorable dishes of lasagna. One was La Trattoria at the start of what is now Calle Robert Graves and the other was the Africa Bar, on the other side of the street.

The Africa was one of the most popular bars in the Plaza Gomila area and it didn’t do food of any kind until an Italian called Mario put on lasagna, which he made at home and brought down to the bar. You could do things like that in those days.

The lasagnas at that time were baked in rectangular containers, either aluminium, ceramic or metal, and were big enough for eight to 12 generous portions. They were always done with layers of meaty bolognese sauce and a thick bechamel.

That was in the old days. Most of today’s restaurant cooks, as far as I can see, prefer to take the easy way out — they do their lasagnas in individual cazuelas that are frozen until needed. A microwave does the rest of the work.

Until recently the only place I know of that still does a traditional lasagna in a rectangular dish is La Bottega in Calle Fábrica where Michele Caporale has it on the blackboard from time to time. It’s the best lasagna I ever had in a restaurant. 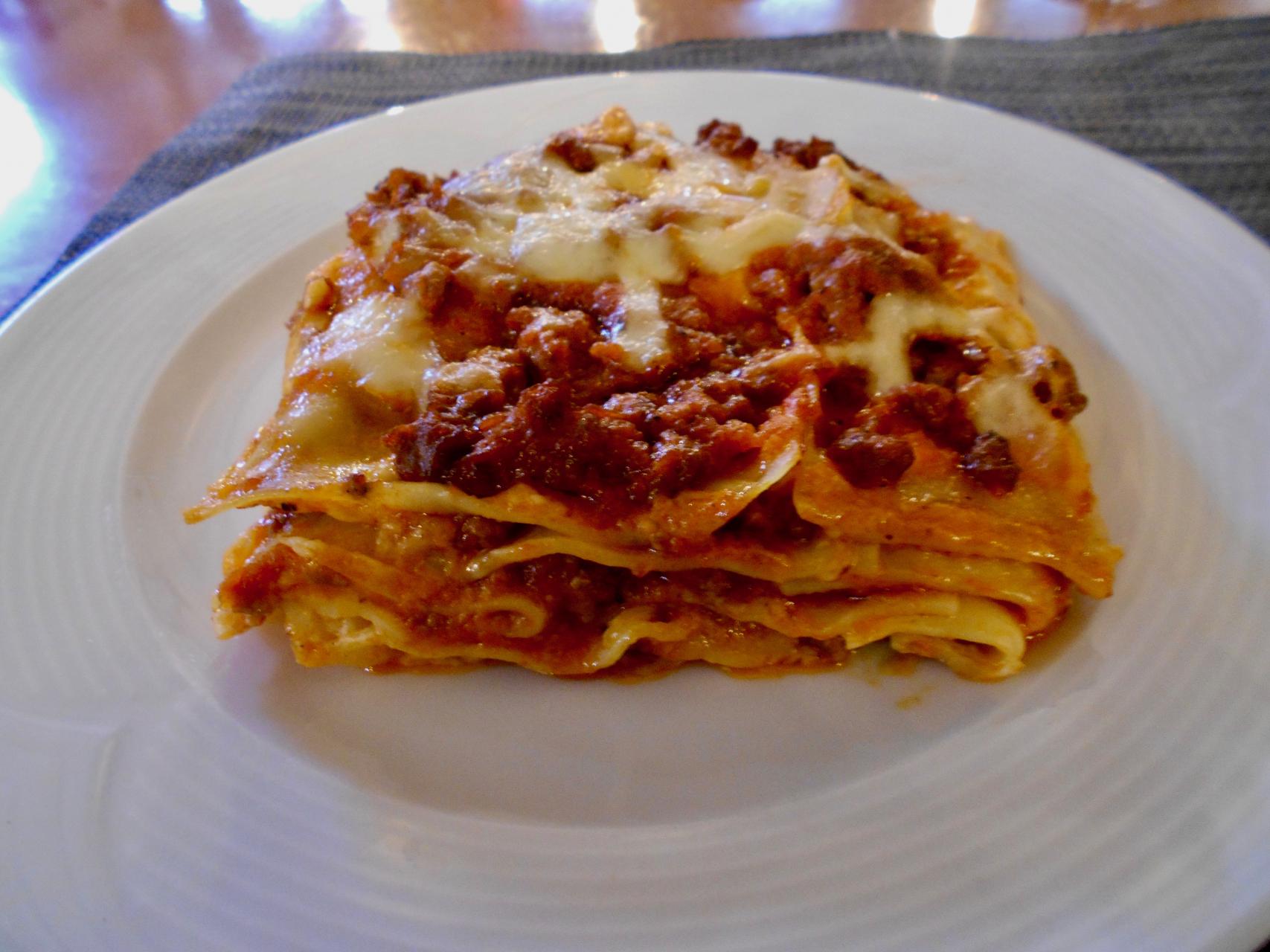 In recent years I’ve looked all over town in search of an authentic baked lasagna and two weeks ago I finally discovered one — right under my nose, so to speak, because it’s served at a cafeteria I pass most days of the week on my way home from the centre of Palma.
The cafeteria has been run for the past four years by an Italian called Samuele who serves all kinds of sandwiches and other cafeteria food, and for the lunchtime trade he has three dishes and a dessert on the blackboard.

There’s always a pasta and usually a fish or a meat dish plus a salad. Samuele has his own fresh pasta place in Lluchmayor as well as another outlet near the Escorxador, the old abattoir.

The pasta dishes have three advantages: they are authentic, very nicely done — and they are the most economical ones I know of. The lasagna was absolutely scrummy: lots of meaty bolognese sauce, smooth bechamel sauce, lovely fresh pasta and a generous portion.

And the price was €7.70. I’ll write that out in case any of you think it’s a misprint: seven point seven euros. Samuele has his own pasta-making outlet and he can therefore keep his prices down, but even so, an excellent lasagna at €7.70 is absolutely unheard of in my experience…unless I turn the calendar back 20 years or more.

Normal pasta dishes such as spaghetti or tagliatelle cost even less (€6.70) and this week they had an entrecôte steak at €10. I haven’t tried it or even seen it, but I’m sure they’ll do it well.

Next time I see it on the blackboard I’ll be nipping in to try it — but only after I’ve had another of their superb pasta dishes at under €7.

Carbonara seldom gets more genuine than this 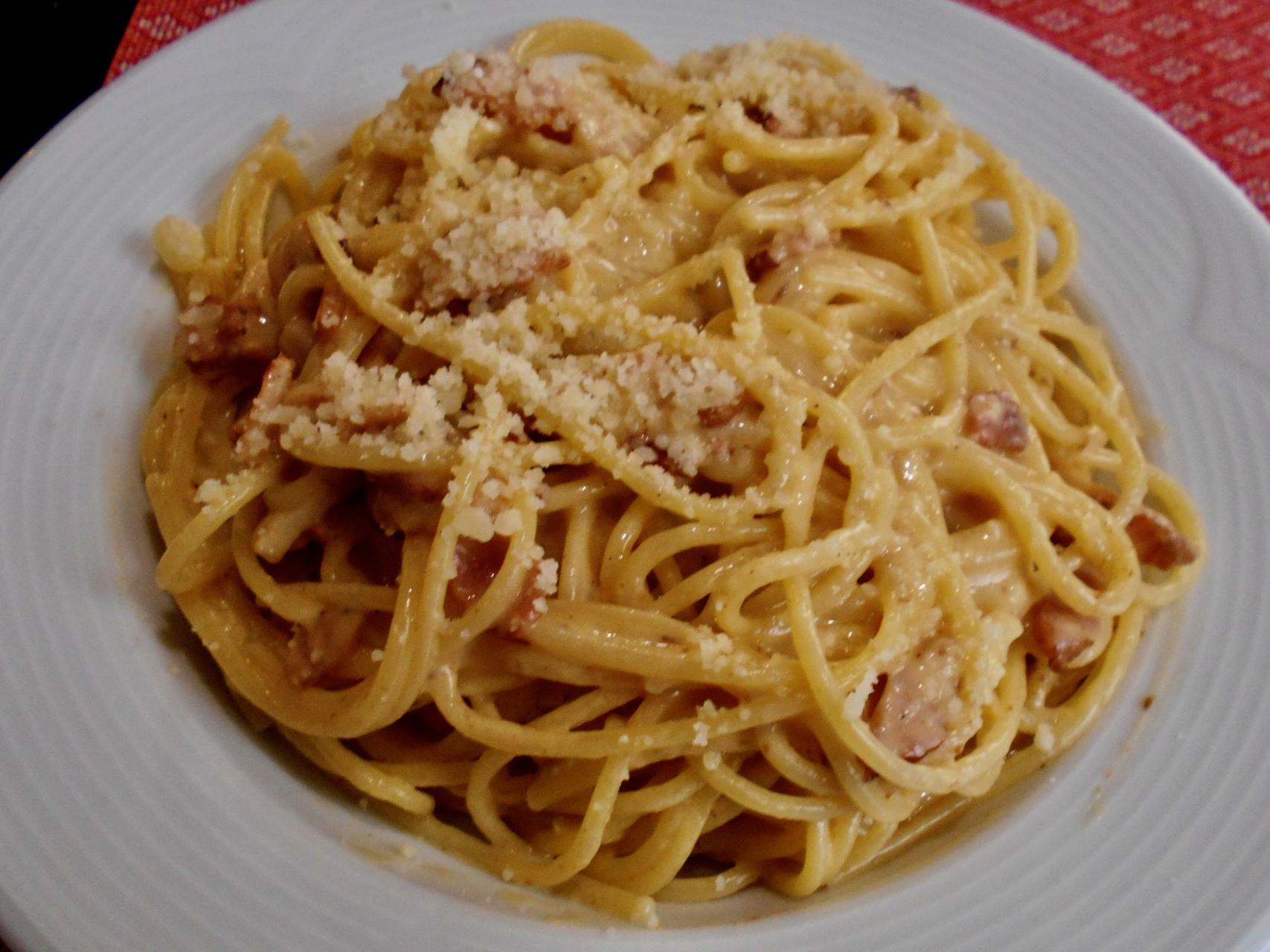 Can Torrat: 40 years on top of a chargrill

It’s difficult enough to find authentic baked lasagna in Palma but no restaurant I know of will do you a truly genuine dish of spaghetti carbonara — for the simple reason it is banned by the health authorities.

Spaghetti carbonara is one of the very easy pasta recipes because it contains few ingredients and even novice cooks can turn out a fine version.

The ingredients for the sauce are pancetta, raw beaten egg and parmesan cheese. Most restaurants use ordinary bacon instead of Italian pancetta, which is cured belly of pork.
In the very best Italian restaurants bacon and even true Italian pancetta are shunned and guanciale, which has recently become available in Palma, is used.

Guanciale is the dewlap of the pig, the fold of loose skin hanging from it throat. Although it consists mainly of fat with perhaps a thin streak of lean, it is expensive and few restaurants use it.

This dish is so simple that some places finish it off at the table which, of course, always costs more. 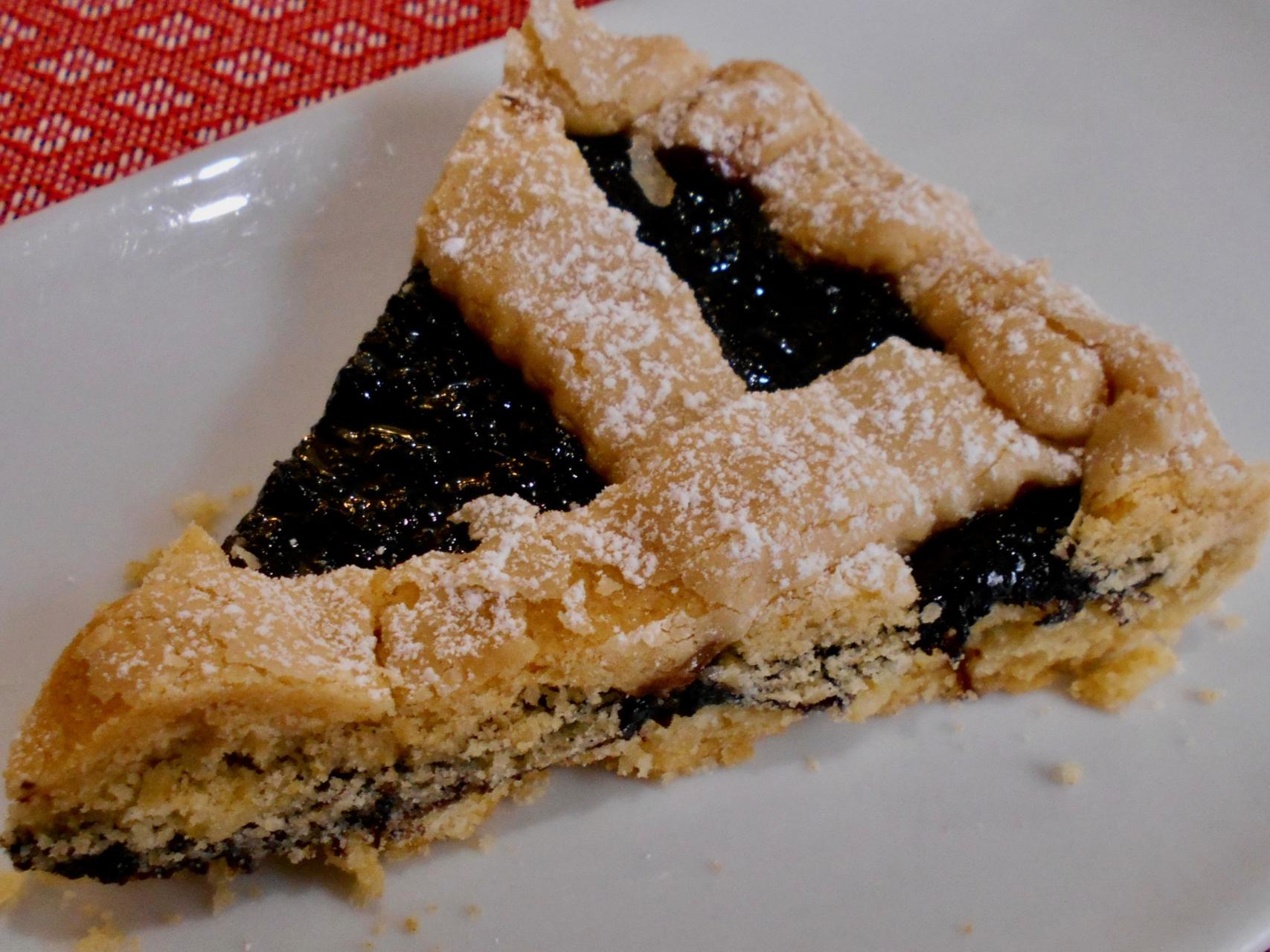 In a suitable frying pan (I’ve seen cooks here using a Mallorcan greixonera) the pieces of sautéed bacon are tossed with the drained spaghetti and a raw egg yolk is stirred in.
It cooks slightly in the residual heat of the pot and the spaghetti. The temperature isn’t hot enough to curdle the egg yolk and it turns into a lovely smooth sauce.

But some years ago it was discovered that cases of salmonella were caused mainly by the use of raw egg yolks in mayonnaise and that brought a ban on raw and undercooked yolks in restaurants.

So that meant the end of spaghetti carbonara in its genuine and traditional form. Some cooks used dried egg for making sauces and similar dishes, but an even easier way out for carbonara was to stir in a little cream. But that wasn’t an authentic carbonara.

The carbonara at Es Suprem is as near as you’ll get to a true carbonara because they mix the egg yolk with very hot water and that kills off any bacteria that may be there.

So you end up with a smooth sauce and some really superb little strips of unsmoked bacon. And the spaghetti was cooked to a delicious al dente degree. No wonder the lawyers from the Law Courts on the other side of the street, who hadn’t eaten anything since breakfast, were calling for large portions.

This place is obviously great value for money. I know of no other eaterie with such rock-bottom pasta prices. And what about a piece of jam tart with crumbly pastry for only €1.50? Even supermarkets don’t have jam tarts at such giveaway prices. But there’s much more to it than the cost.

The other great deal here was that everything I had — two pastas and the slice of jam tart — was absolutely top rate. The baked lasagna at €7.70 was an incredibly low price and it was right up there with the best I’ve eaten here and in London. The spaghetti carbonara, creamy and eggy with an abundance of diced pancetta that added loads of taste (€6.70) was also a huge success. 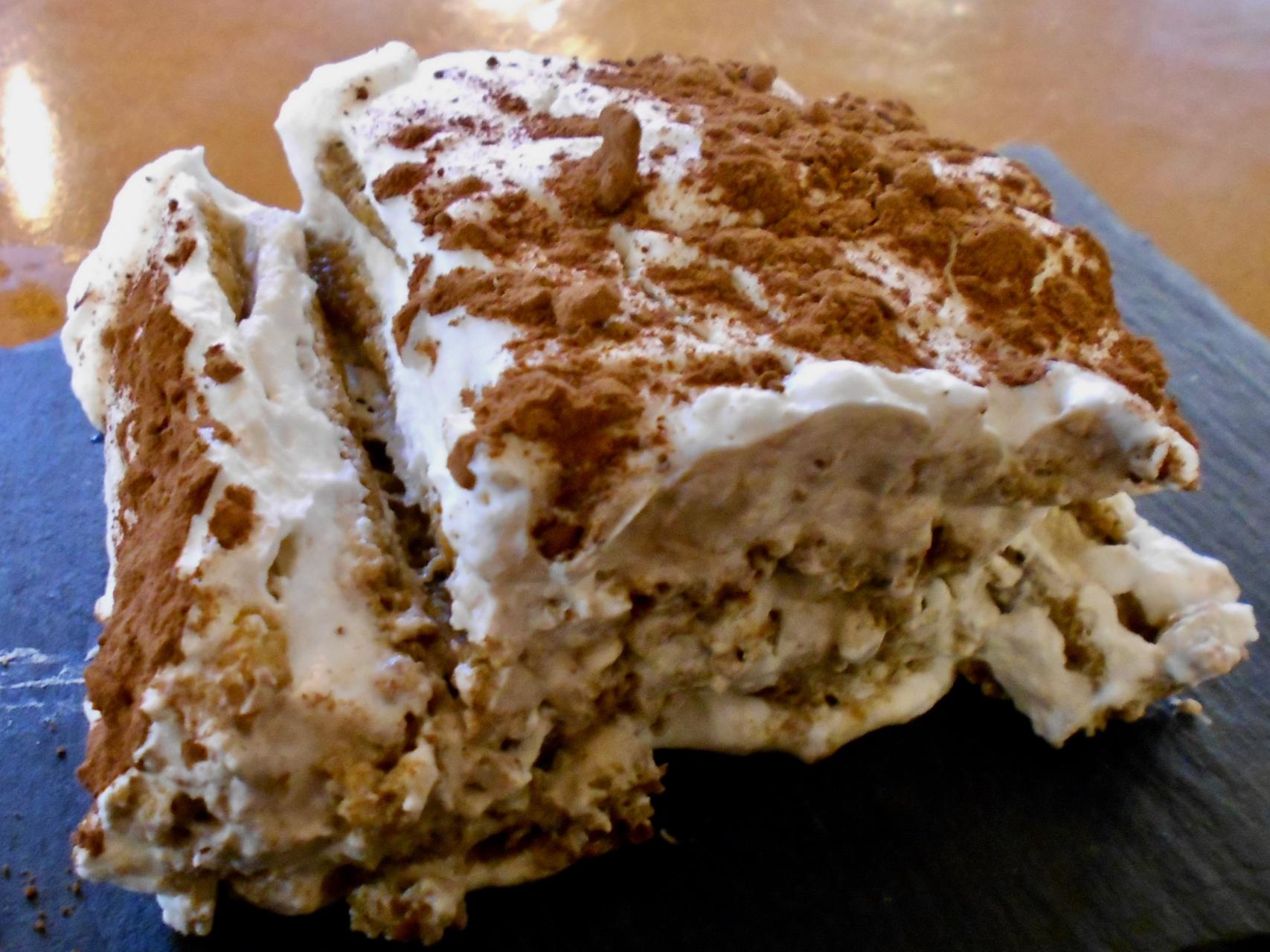 On the other hand, this is a cafeteria and not a restaurant so there are no frills and sometimes it’s rather noisy. And as Es Suprem is right opposite the rear entrance of the Law Courts, the day I was there some of that noise came from nearby tables where groups of lawyers were giving each other animated accounts of that day’s trials. This was just after 3pm and some of them called for extra carbonara because they hadn’t eaten anything since breakfast.

Es Suprem, Calle Parellades 15, Palma. Tel:688-327162. This street is at the rear of the Juzgado (Law Courts) in Vía Alemania. Open from Monday to Friday for breakfasts, mid-morning snacks and a lunchtime trade based on a pasta, dishes of Spanish pulses, a fish or meat dish and a dessert.

The food looks very good , very nice to see will come and have a real test !