The Romaní waiters and waitresses don’t mess about

The two plates of fried skate with chips or salad. | Andrew Valente

Last week I did something I haven’t done in the past seven years or so: I got on a train at Palma’s Intermodal station and headed out to one of the inland towns. It wasn’t a very pleasant experience for a sporadic traveller like myself.

The last time I used the train I could buy my ticket at one of the manned windows. I asked for a return, and went down to the appropriate platform without any hassle.

I had been warned the ticket windows probably wouldn’t be manned and that I’d have to use the machines. That was what happened and that was when the unpleasantness started.

The machines don’t give you enough time to work out what you have to do — and before you know it, the screen’s gone blank and you have to start over again.

That’s for someone who speaks Spanish. Tourists without any Spanish would find it impossible. I wasn’t at all surprised to see that there were no non-Spaniards among those heading for the platforms.

Things were a good deal easier when I got off at Santa María, even although it was raining in a very English kind of way: light and soft, so there was no need for me to put up my Brooks Brothers folding umbrella.

When you walk out of the station you take a street opposite the exit and 150 yards later you turn right and you’re on Santa Maria’s main street where there are lots of shops, bars and restaurants.

Almost immediately I came across a shop with an amazing range of most attractive glassware. We have nothing like it in Palma, not even on the fifth floor of El Corte Inglés in the Avenidas. 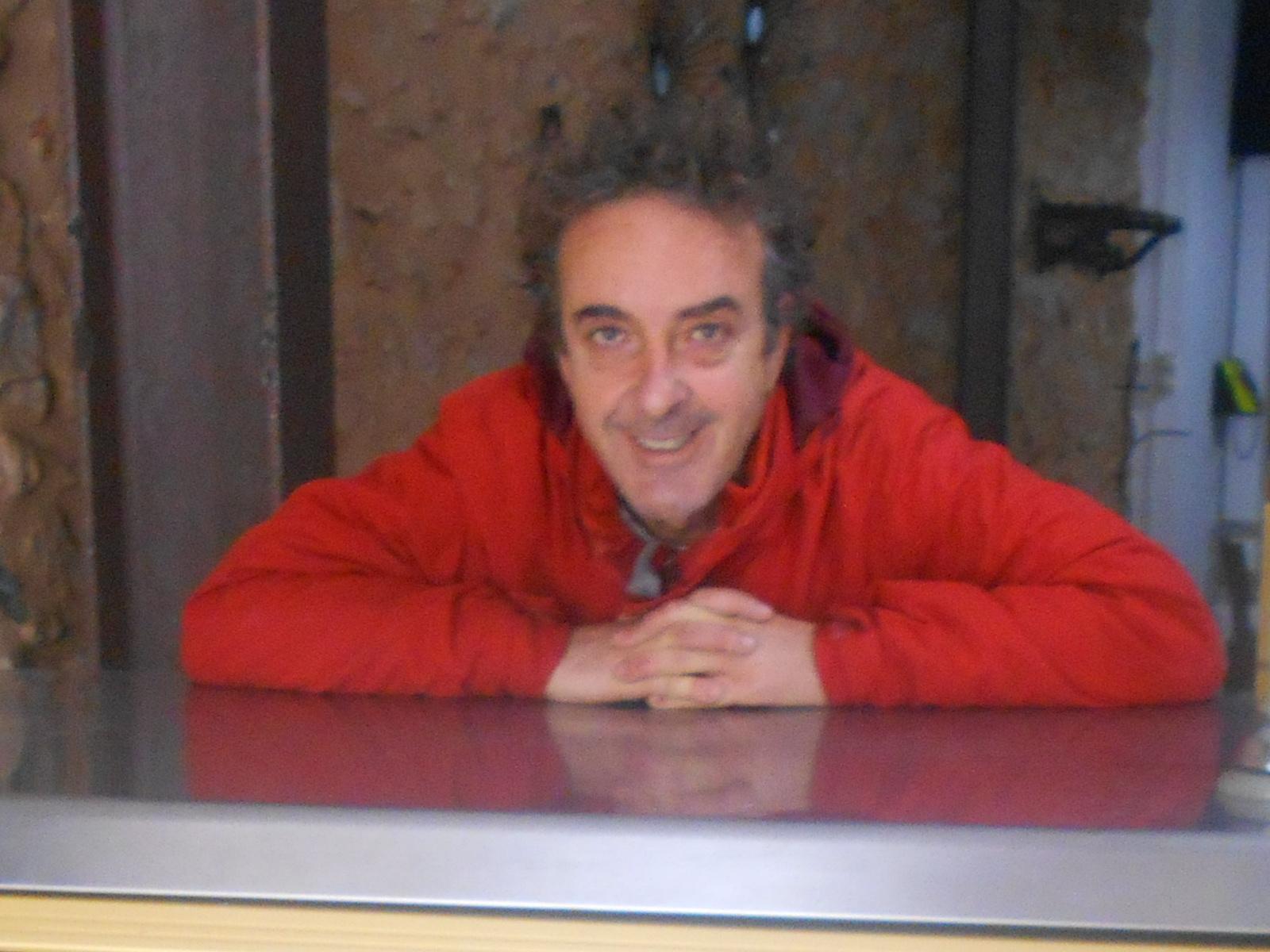 There was so much I wanted to buy but I limited myself to one small thistle-shaped liqueur glass which I’ll use for sipping Drambuie and single malt whisky from Islay.
I was so pleased with my little €6 glass I felt like dancing along the street with my umbrella opened and singing in the rain. But I soon saw Es Romaní restaurant, liked the look of their menú del día and I knew I’d be eating there with top cook Jacinto del Valle, who is from Santa María.

The Romaní waiters and waitresses don’t mess about. As soon as we had sat down, a waiter was there putting out plates and knives and forks. When he turned away, another waiter was putting down a bottle of red wine, a half-litre bottle of gaseosa, a bottle of water, a plate of Mallorcan pan moreno, a little bowl of garlic mayonnaise, and a dish of split bitter green olives. And we hadn’t even ordered. 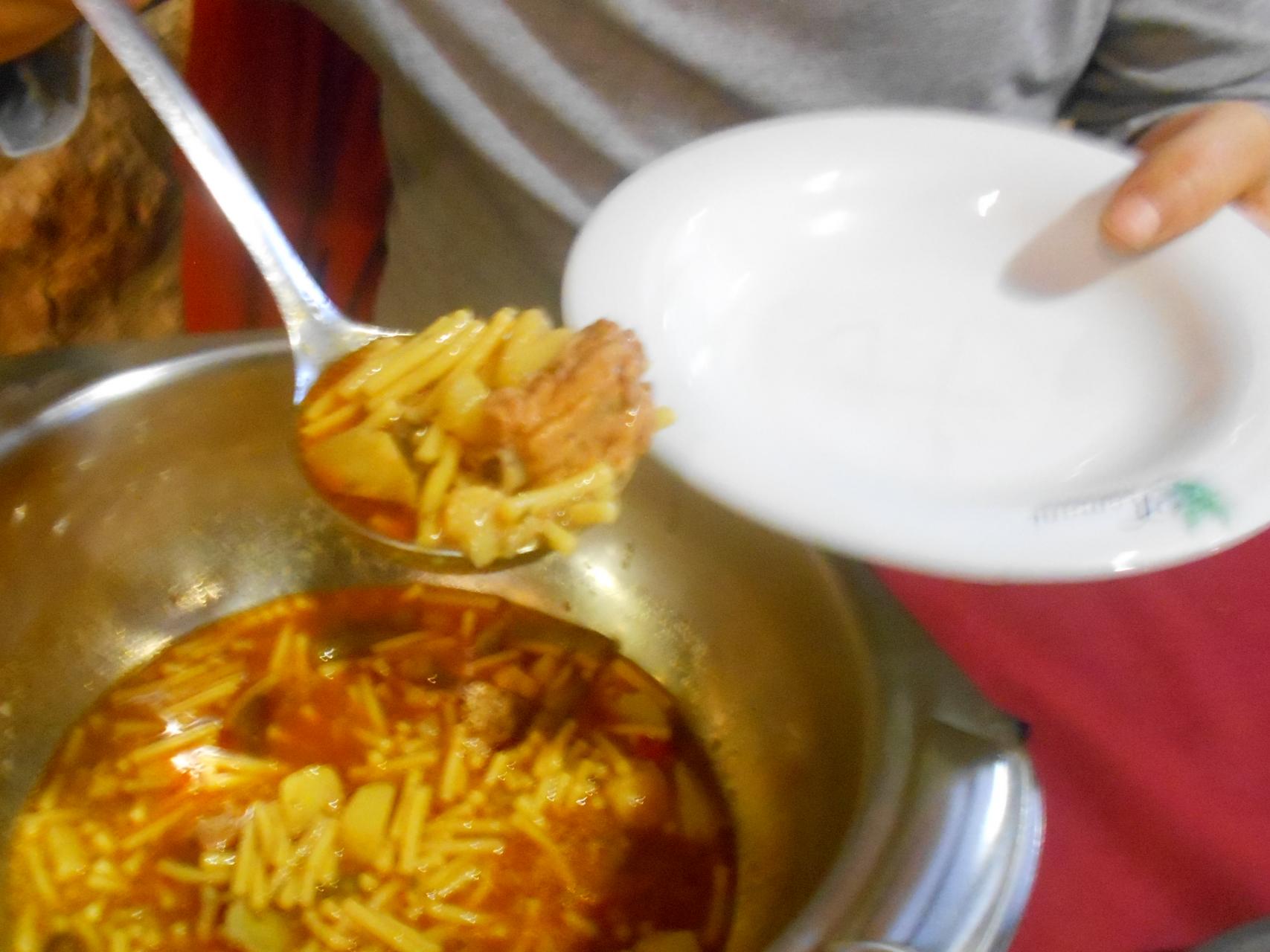 My friend wanted only half a menu (fideos with meat) but I ordered two of the mains I was having in order to have a reasonably good picture for up top…the sacrifices I have to make to get the right kind of picture.

This was a mammoth serving of fideos for just one person

My main reason for going to Santa María was to interview top cook Jacinto del Valle (more about that in a future report) who was born there and still lives in the town.
Jacinto decided he would have only one of the starters, a dish of fideos (broken noodles) with meat and vegetables.

A waitress brought the fideos in a biggish tureen and served Jacinto a brimming plateful. I thought that was a generous serving for a menú del día.

But that wasn’t the end of the story — the waitress went off and left the tureen on the table so Jacinto could help himself to seconds…or thirds or fourths or more, because there were at least four portions in that tureen. Jacinto had seconds. 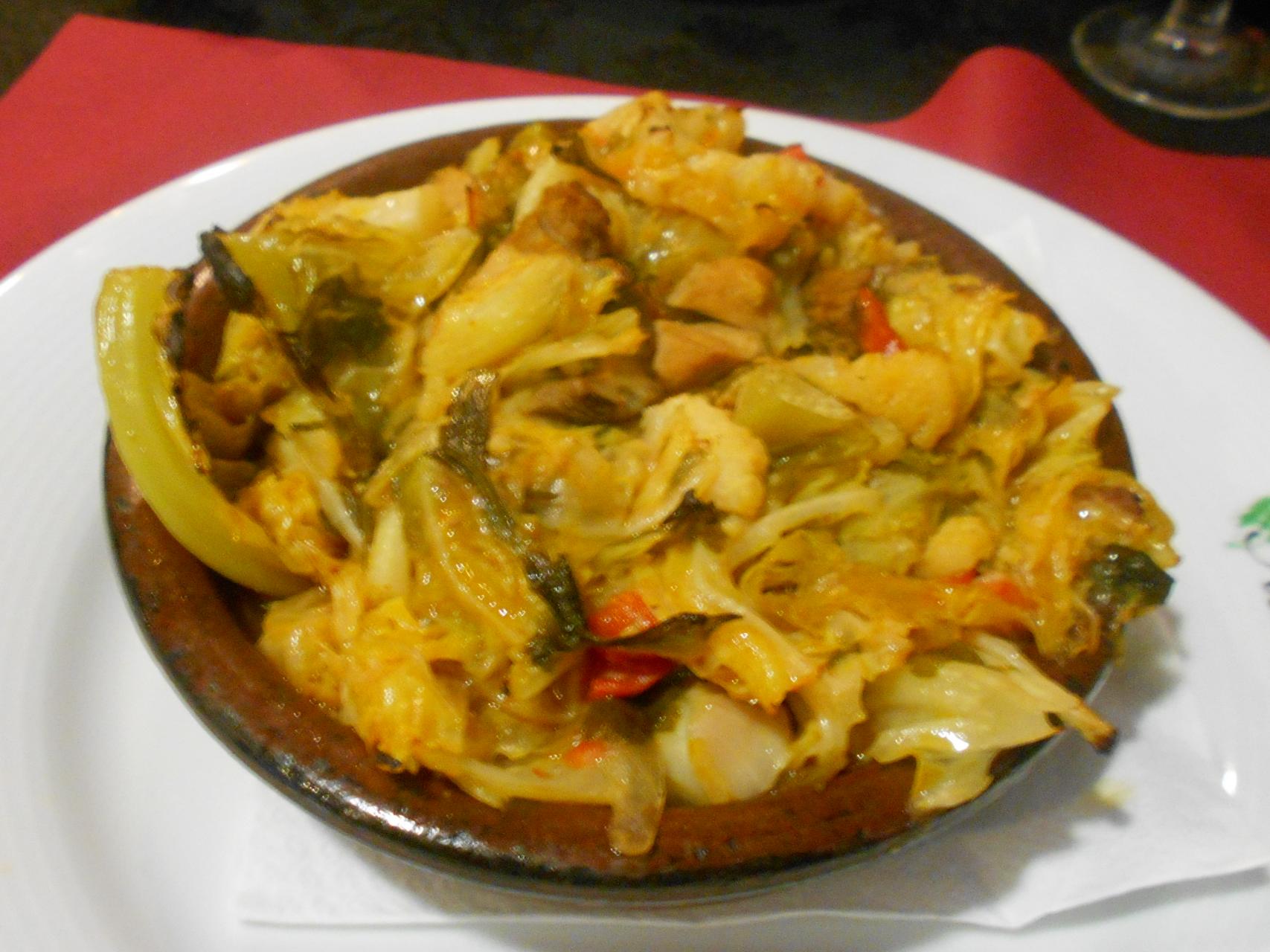 My sopes mallorquines came in a small cazuela that was packed with lovely veggies that were nicely al dente.

There was only a small amount of thinly sliced bread on the bottom of the brown earthenware dish — which is exactly how most Majorcans like their sopes mallorquines.
But it wasn’t to my personal taste. I prefer my sopes to have more bread than veggies — the bread nicely moist and tasty, the veggies somewhat less than al dente. That, however, is a minority preference. 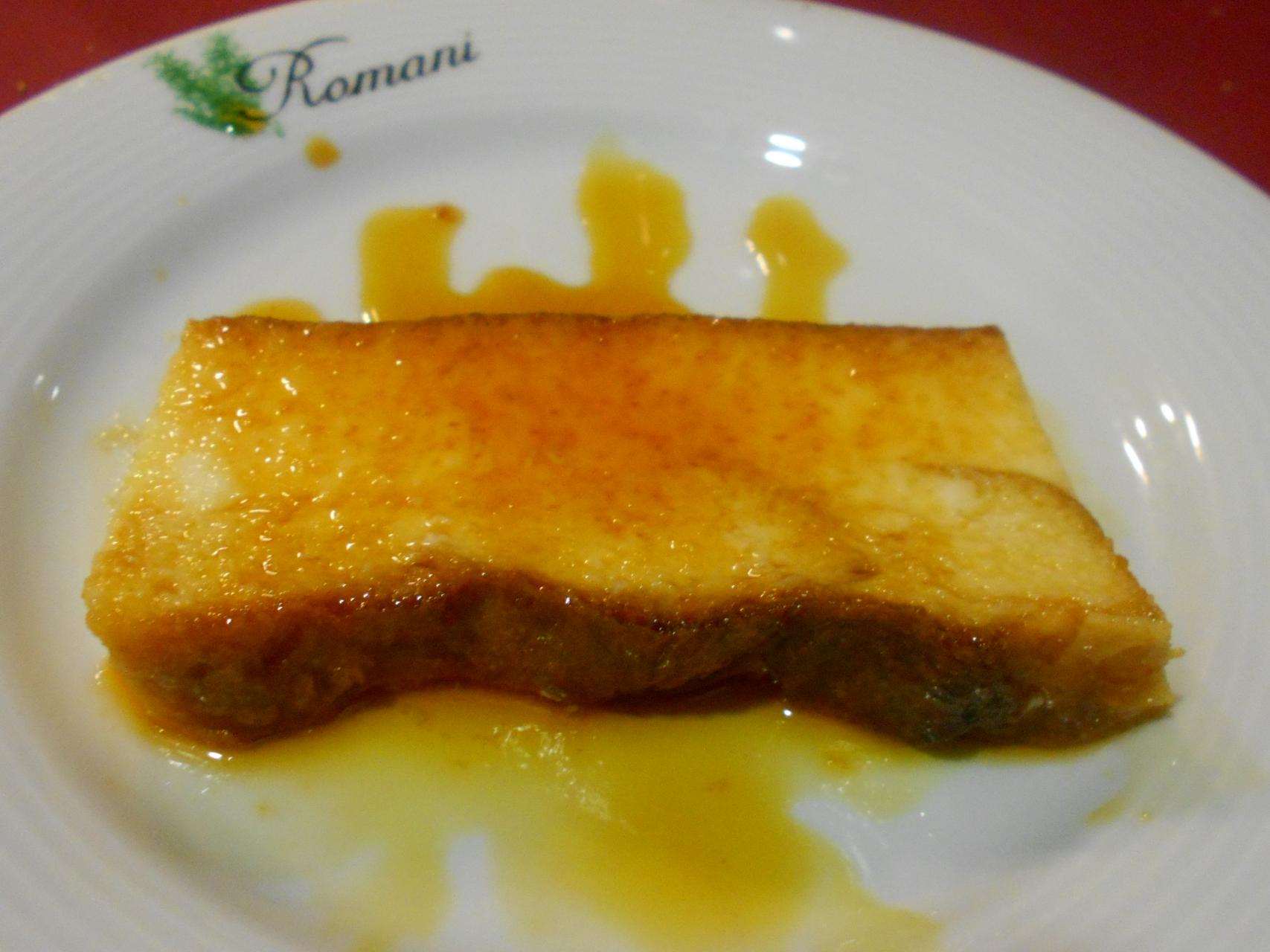 A last minute addition to the menú del día was fried skate, a dish I adore but one I seldom find on restaurant menus.

Jacinto had immediately said he’d have only the fideos but I ordered two skates in order to get a better picture for the main section of the review.

So that meant I had a double main course — which was ideal because I don’t come across fried skate very often.

The two pieces of skate in each serving were from a small fish, so the cartilaginous bones were thin and most edible. I picked up each piece of skate and ate it with my fingers as if it were a tapa.

For dessert we both had a traditional Mallorcan ‘pudin’ which was a nice smooth version. I had the plain ‘pudin’ but Jacinto preferred his with a mound of whipped cream.

Later at the station I had the same trouble with the machines and it took so long to get a ticket that I missed the train. But that didn’t matter too much because there was another one in 25 minutes.

That gave me time to sit under cover on the platform and watch the rainy landscape topped with dark grey clouds while thinking of England.

Eating at restaurants in small inland towns is so much different from having a meal in a similar place in Palma. You get a great buzz from the people there because they are mainly locals who know each other. As soon as I walked in with top cook Jacinto del Valle, who was born in Santa María and still lives there, he was being greeted by diners at nearby tables. I loved the way the waiter brought a bottle of red wine and gaseosa without even asking us what we were drinking.

In Santa María everyone drinks one of the local reds and some like it with a bit of lemonade. My sopes mallorquines was made with lots of veggies and very little bread — which is exactly how Majorcans like it. My personal taste is for a great deal of bread and just a few veggies. But it was a very good all-veggie version.

As Jacinto was having the fideos as a half-menu dish, they brought a tureen with enough for at least four portions. I had two plates of fried skate and they were delightful. The skate wings were from a small fish so I was able to eat the tender cartilaginous bones as well as the flesh. Our traditional ‘pudin’ was a good Mallorcan version.

Es Romaní, Plaza Hostals 12-A, Santa María. Tel:971-140315. Although this address is called a plaza (a square) it is actually just a wide part of the main street. If you get there early (about 1pm) or latish (we arrived at 3.15 pm) you should have no trouble getting a table.

This was the most laconic restaurant bill I’ve ever had. All it said was “Two menus €22”. Those six items that were put on the table before any of the dishes arrived, including the bottle of red wine, were all part of the €11 menú del día.