The platter of deep-fried breadcrumbed calamarines and langostinos. | Andrew Valente

Cyn is Cynthia Nolan, a name many of the Bulletin’s longtime readers know well. I don’t actually call her Cyn but I’ve used it today because its three letters make it ideal for headings. I also used it 18 years ago when I did a two-part four-page feature on her.

Cynthia has many claims to fame but the most amazing one is that she invented the package holiday — when she was 21. She’s now 93 and is still very busy around Palmanova where she lives with the help of her live-in carer, Susie.

Cynthia was able to invent package holidays because in the late 1940s her entrepreneur father had Dakota propeller-powered passenger planes he used on the Liverpool-London run and wanted her to do something with them. 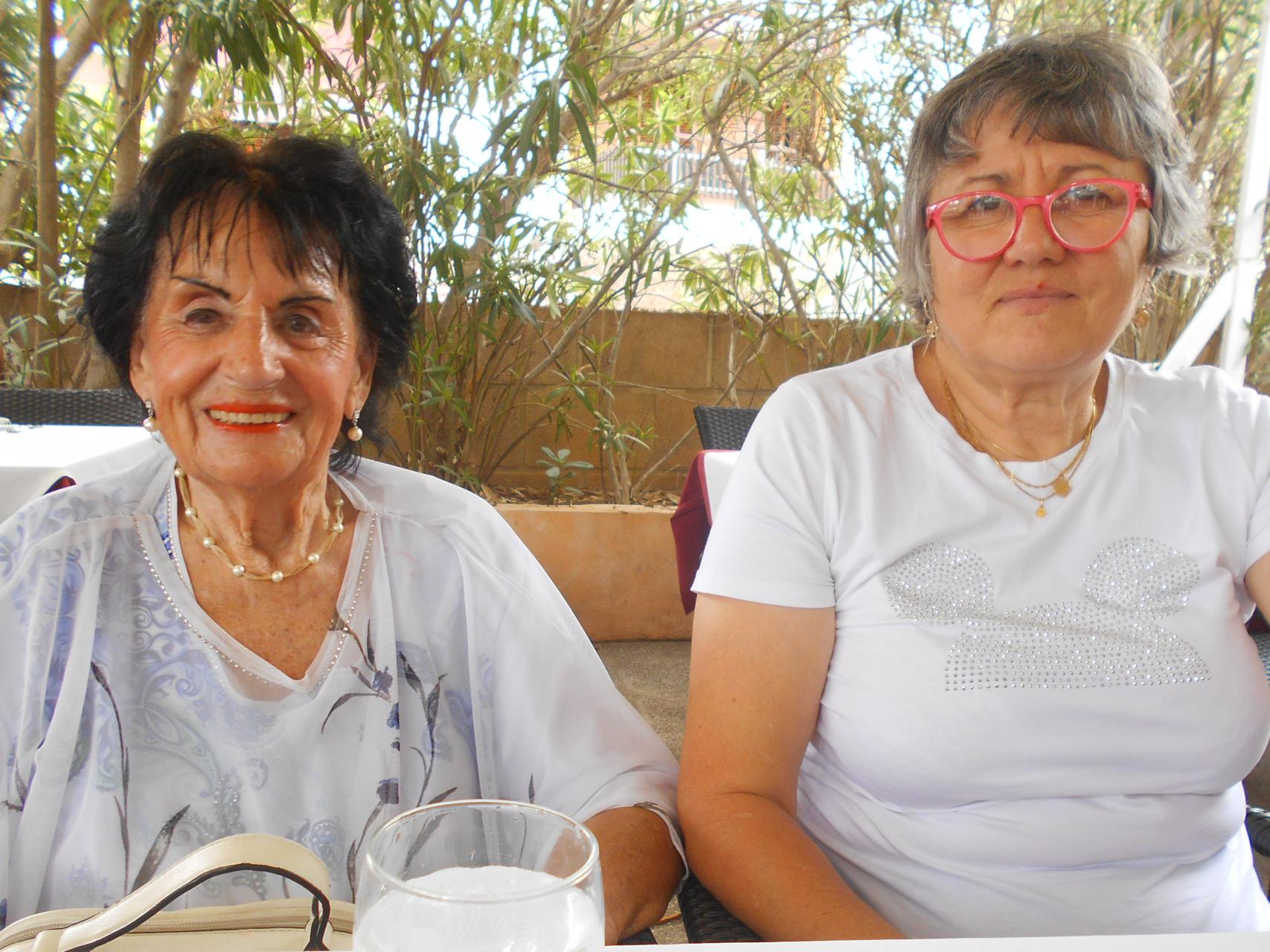 That something was flying 36 people to Palma and many other places on what became known as package holidays. It was 36 at a time because the biggest Dakota was a 36-seater.

Although that is a major part of Mallorca’s incredible tourism history, today we’re more concerned with another of Cynthia’s claims to fame: her penchant for organising superb birthday parties and unique roller coaster Christmas festivities.

More than a year ago Cynthia phoned to invite me to her birthday party. But the pandemic put an end to that idea. She knows I am very fond of fish and chips and two months ago invited me to a place in Palmanova that does them beautifully. I accepted eagerly.
But the extreme summer heat was suddenly upon us and we decided to wait until the temperatures dropped. That was last week, when Cynthia and Susie picked me up in Palma and drove me to lunch in Palmanova.

By this time Cynthia had decided the Bulletin’s restaurant reviewer should have something better than fish and chips, although I thought an English-made version would have been perfect as I can’t get fish and chips in Palma.

But Cynthia thought a more appropriate place would be Modigliani, named after the Italian painter whose portraits and nudes are noted for their elongated forms. This was going to be nostalgic as this would be my first visit since I did a review soon after they opened about 18 years ago. 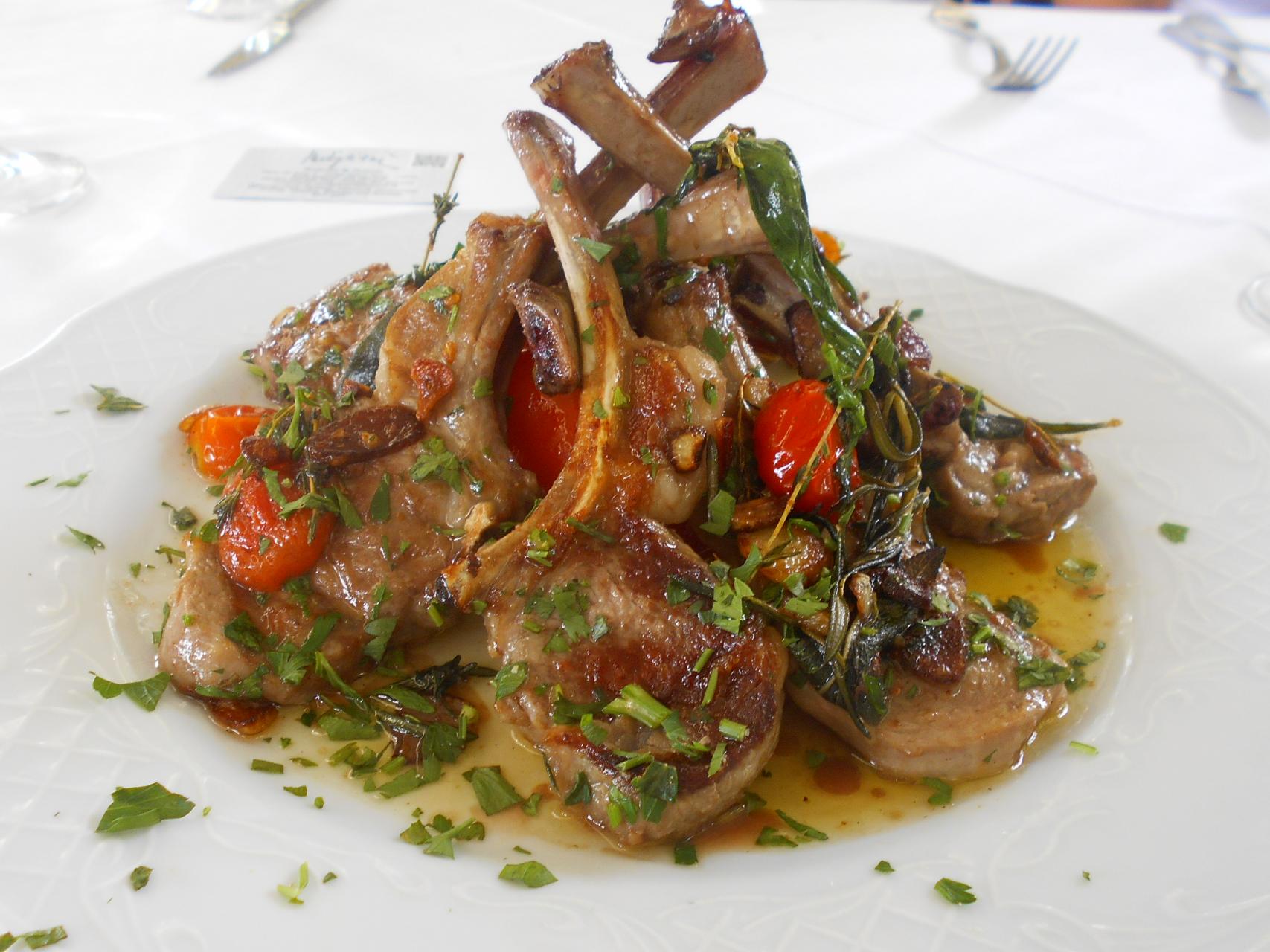 Cynthia had told me they do magnificent lamb chops and excellent fish dishes, but I said I’d be having pasta of some kind and I’d leave the chops and fish to her and Susie. And that’s exactly how the dishes were dealt: lamb chops for Cynthia, sea bass for Susie and spaghetti with pesto for me. Cynthia wanted to order starters of our choice. But I suggested we share a fritto misto di mare, seafood deep-fried in batter or breadcrumbs that the Italians do so well.

It turned out they don’t have fritto misto on the menu but when a waiter consulted the kitchen, the owner came out and said they’d do us a simple platter of fritto misto. And that’s what they did.

Cynthia was all for ordering an expensive bottle of Italian wine to celebrate the occasion, but Susie always has water because she’s the driver and I preferred my usual draught beer.
A glass of Sicilian white wine was ordered for Cynthia but she ended up drinking water and I had the wine.

It was a very nice fruity white and most enjoyable…as it should have been at €6.90 a glass.

When Cynthia first mentioned Modigliani she raved about their lamb chops and said I must try them. I couldn’t go to an Italian place without having pasta (I can easily pass on pizza) but I said I’d taste a piece of lamb chop.

When the main courses arrived Cynthia insisted on giving me a whole chop and I’m glad she did — it really was the tenderest I’ve ever eaten. I’ve had lamb chops and carrés that were pinker, but none was ever so velvety soft.

But it wasn’t just tenderness: taste came bursting out of every nibble, partly because this was first class lamb and also because the cook had herbed the chops beautifully: I spotted a good amount of fresh thyme, a little oregano and some basil.

Cynthia is very much on my culinary wavelength: when she had cut off as much lamb as she could with her knife and fork, she nonchalantly picked up the bone and gnawed off the rest. I do that with all meats on the bone.

When the owner came out to see what we thought of the main courses, I asked him where he bought his lamb chops. I was hoping they were from a local butcher where I could also buy them. But they’re New Zealand and he gets them from a supplier who imports them from Hamburg.

The off-the-menu fritto misto di mare was a platter of breaded calamarines (small squid), some of them whole and others sliced up in different ways, plus langostinos.
Never have breaded calamarines been as tender as this. And not just some of them (as is often the case) but every single piece, from the whole ones to the tiny tentacles. The breadcrumb coating was crisp and oil-free.

But the langostinos were disappointing. The deep-fryer oil that had worked wonders on the calamarines and made them so beautiful, was too much for the langostinos: they were overcooked and somewhat dry. 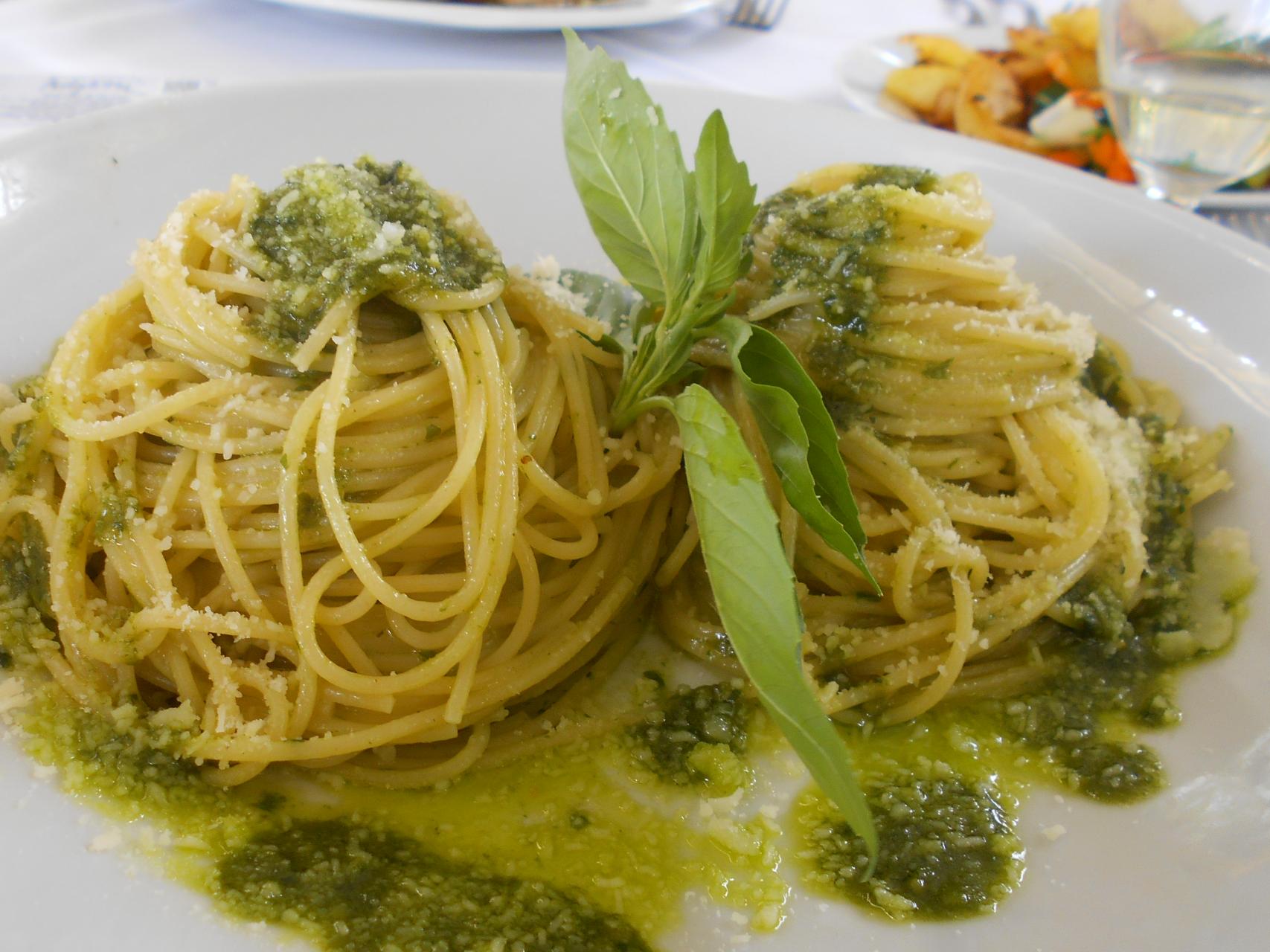 My spaghetti with pesto, however, was perfect in every way. It was actually spaghettini, a much more difficult pasta to cook because it is so thin: if you overcook by as little as 20 seconds you can spoil it. But the cooking time was spot-on.

As you can see in the picture, the portion was a generous one, and for true pasta freaks that is important. The pesto’s rich basil taste and the right price of €12.90 were also important.

All of this, plus much more, including reminiscences of times past, all helped to make this a lovely day out with a lovely lass from Liverpool.

Modigliani is a trattoria and a pizzeria and its prices for pasta and pizzas are normal. The platter of fritto misto, specially prepared for us, was done with calamarines (little squid) and langostinos. It worked out at €10 per person, a good price considering the little squid were among the best ever. Some of them were whole and breadcrumbed in such a way that they remained full of air when deep-fried.

Some of the calamarines were sliced into wide rings and the tips and the tentacles were breaded separately. All parts were beautifully tender and tasty: a resounding 10-out-of-10 success. The same cannot be said for the langostinos: they were in the deep-fryer for too long and were overcooked and somewhat dried out. 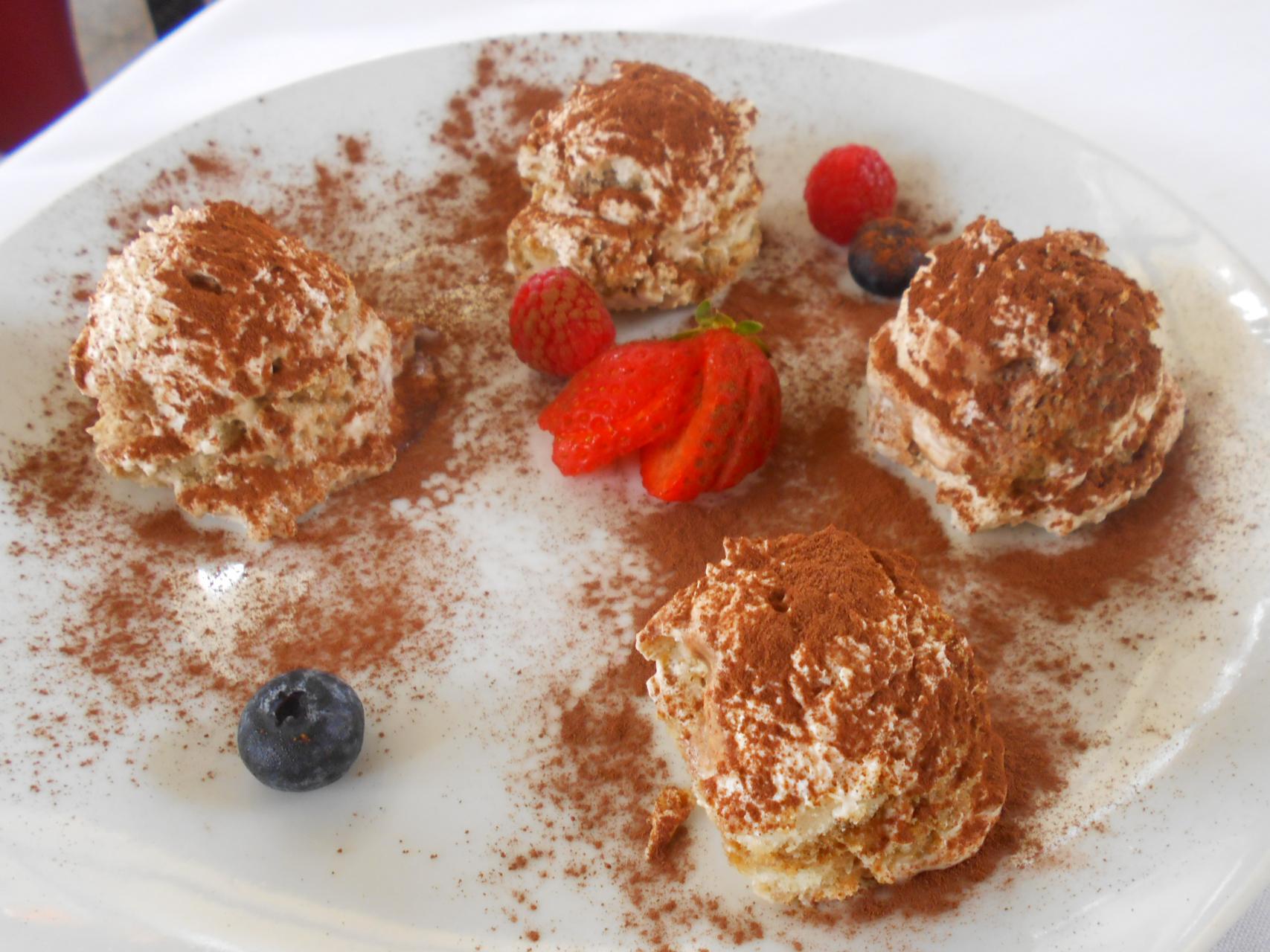 I can’t remember when I last had such splendid lamb chops as these: large, butter-soft tender and tasty.

That added up to another 10. The spaghettini, so difficult to cook correctly because it is so thin, was perfectly à point, the portion was a generous one, the pesto sauce was most memorable and the €12.90 price was right. Another 10.

Trattoria-Pizzeria Modigliani, Paseo del Mar 2, Palmanova, Calvià. Tel:971-683279. Check for opening times and also bear in mind that they close for the winter at the end of the tourist season.They have lots of indoor and outdoor space.

The caña cost €3.10. The bill came to just over €128 but the owner invited Cynthia to the drinks, dessert and other minor items and she finally paid €98, a nice discount of €30.