The single oyster and a lovely mound of chips. | Andrew Valente

Trendy restaurant cooks all over the world are always looking for new ways of making and presenting old dishes: they want to ‘modernise’ the dish, to up-date it.

They invariably take a simple recipe from the early 20th century or much earlier, subtract or add an ingredient or two and give it a new presentation — and that basic recipe gets turned it into a dish many of us cannot afford.

About 20 years ago a dish of fried eggs with chips from a Madrid restaurant called Casio Lucio suddenly became popular throughout Spain.

The dish consisted of a mound of chips, poached in hot oil rather than fried, so that they were white and soft, with two lightly fried eggs sitting on top. The waiter slashed the eggs with knife and fork and the runny yolks oozed out over the chips like a sauce. Casio Lucio was (and still is) world famous for this dish.

But cooks all over the country started to add ingredients such as sausages, bacon, black pudding and ham and completely changed the dish.

Up-market restaurants got in on the act and made their fried eggs with foie gras, the best Iberian cured ham and even lobster. The former egg and chips dish was suddenly selling for €28 to €35. 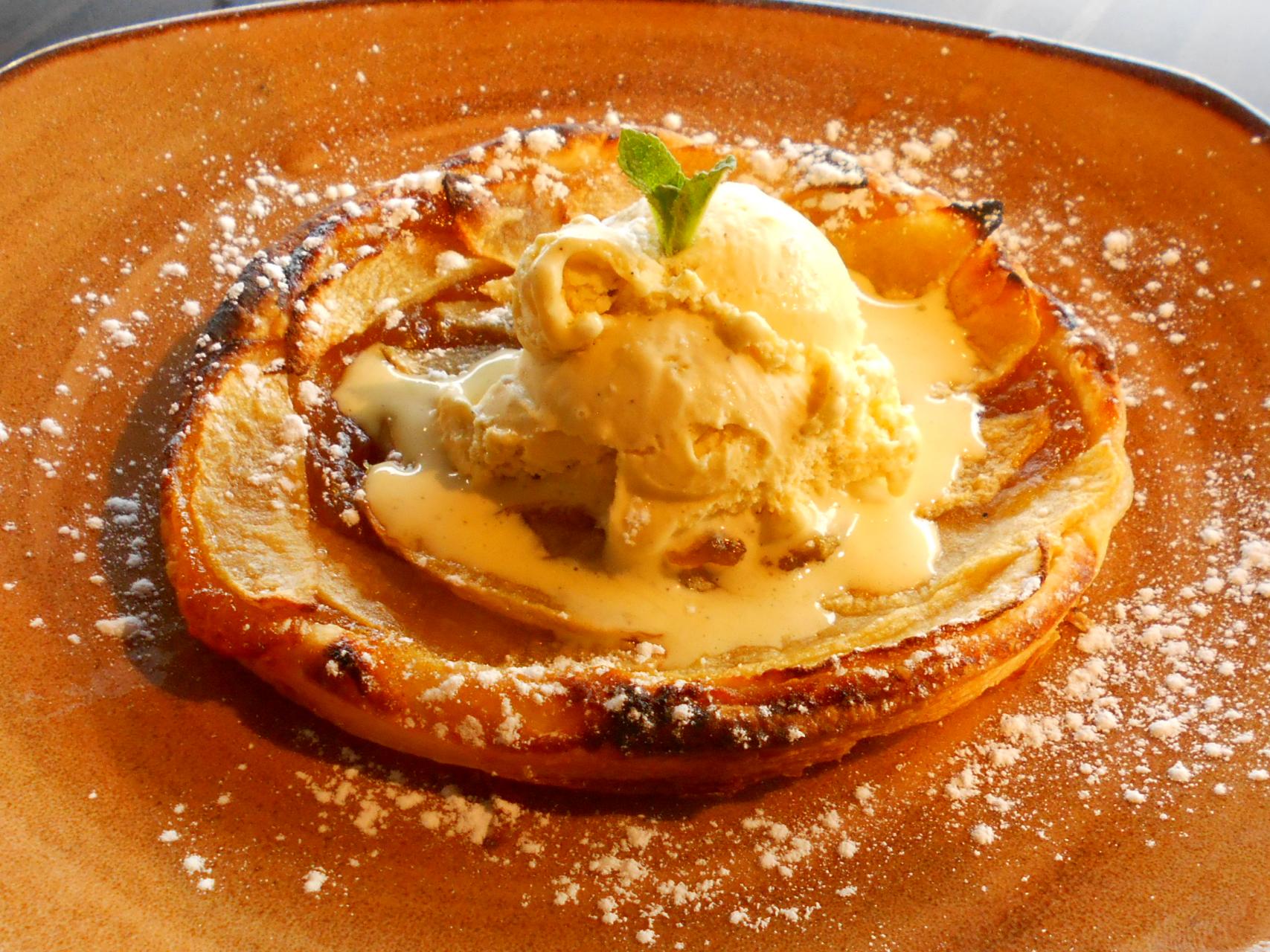 I was at the Bistró at about 3pm on Saturday and the place was chock-a-block full and the waiting staff were working non-stop.

When I gave my order for a single oyster in its shell with a mound of chips straight from the deep-fryer and on the same plate, I’m sure it must have been one of the strangest orders the waiter has ever taken — and on a day when they were working full out.

But he didn’t bat the proverbial eyelid, not even when I called him over to underline that the chips had to be ordinary ‘patatas fritas’ and not one of the other types of fried potatoes on the menu.

When the dish arrived it was just what I wanted: the chips were of a beautiful golden colour, as straight as rods of stainless steel and without even a sheen of residual oil.
The oyster was especially large and was loose on the deep half shell and surrounded by its own juices.

I supped it and its juices straight from the shell and chewed the oyster six times instead of the usual four, to ensure that I extracted every drop of briny essence before swallowing it. I have never ever downed an oyster without first chewing it with gastronomical glee.

That single oyster was sheer ambrosia, especially as I wasn’t expecting to find oysters on the menu. It would have been better, of course, if there had been six oysters on the plate, but that have rocketed the price to €27.60 — more than half of my review budget. 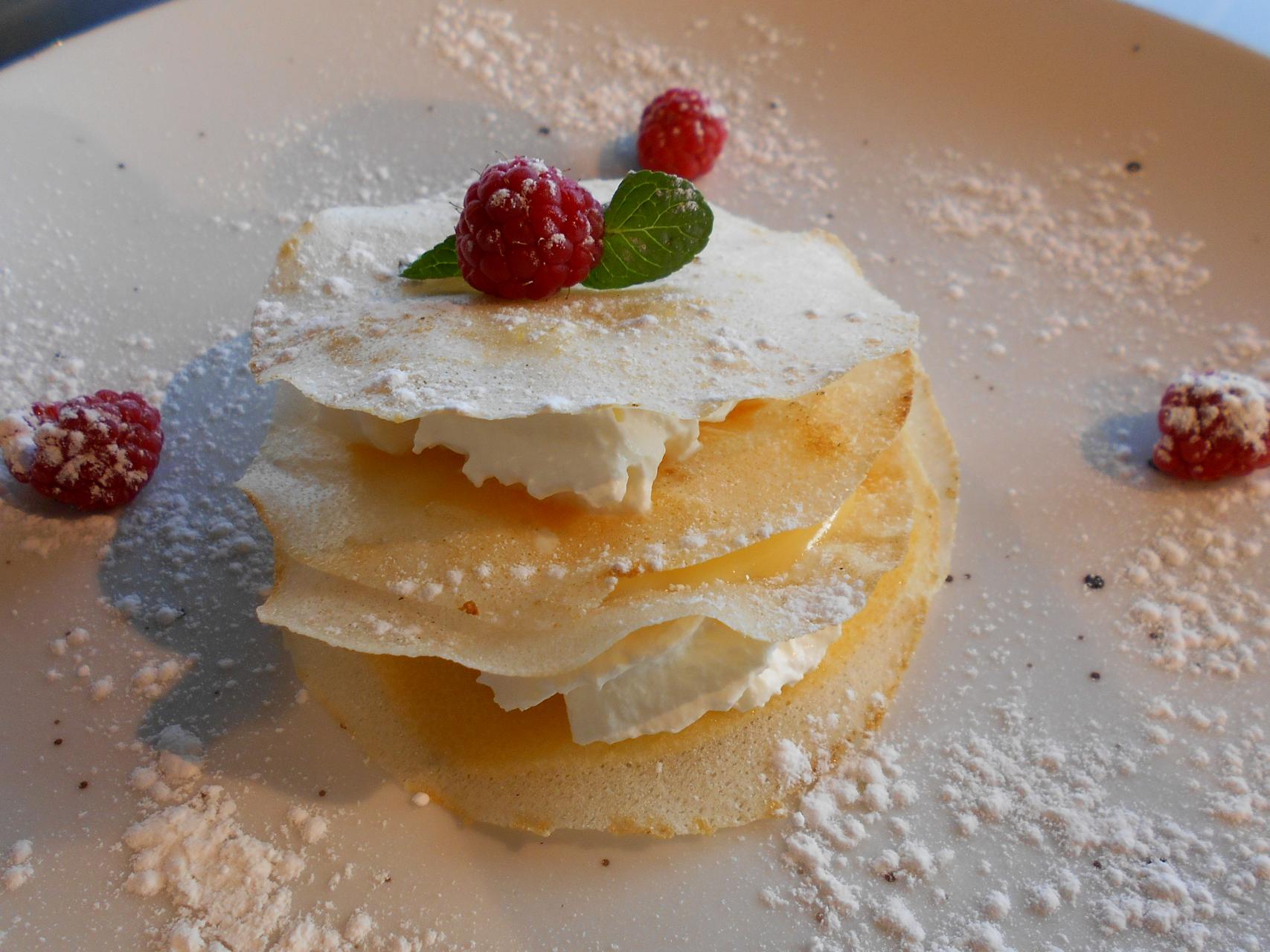 My main job is to find interesting places with dishes most of us can afford. And as the old saying goes: better one oyster than no oysters at all.

The pizzeta is more than a small pizza

The average pizza napolitana is not one of my favourite bites — it’s far too large, too thin, too soggy and too messy. I’d rather have a small foccaccia with a scant herby topping.
Another alternative, which I come across only at the Bistró in the El Corte Inglés in Jaime III, is the pizzeta.

It makes a nice main course for one, can be shared between two as a starter — or even four if it’s just a simple nibble.

You have a choice of three at the Bistró and I couldn’t make up my mind which one would make the best picture — review dishes have to look good as well as taste delicious.

So I got the waiter to tell the head cook I wanted his most photogenic pizzeta, the one with most volume, bits and pieces dotting the surface — and also the best mix of colours.

The kitchen, running in top gear because the restaurant was so busy, took that order seriously and sent out a beautiful pizzeta that was on the bill as ‘pizzeta de verduras’, the vegetable one.

The surface was covered with succulent oven roasted onions, red and green peppers and other veggies, as well as little cubes of white feta cheese and nice coal black blobs of tapénade, the Provençal speciality I wrote about on Wednesday. 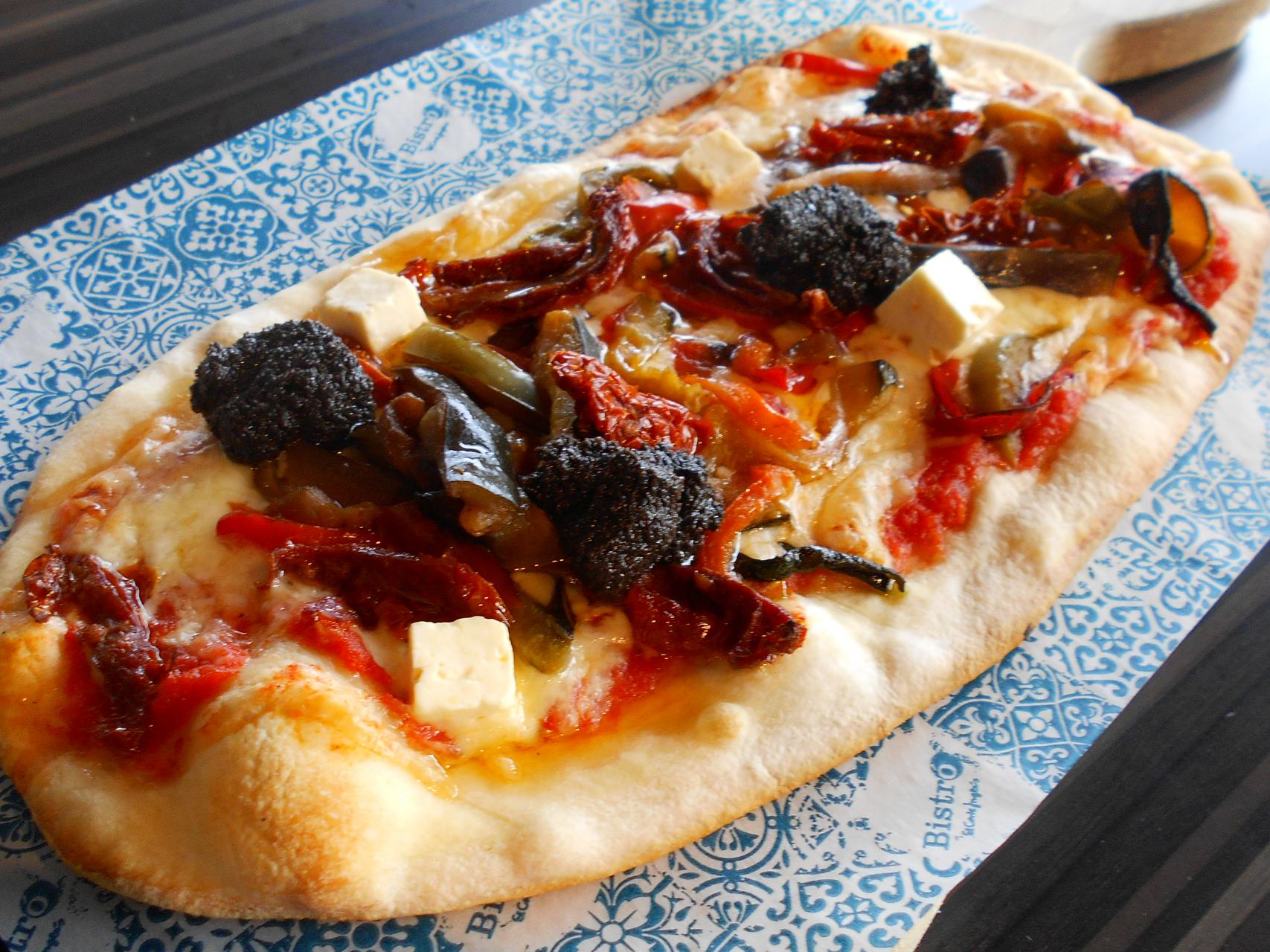 The pizzeta is not just a small pizza — there’s much more to it. It comes in a rustic oval shape but it has an elegant look about it that is most appealing. You want to start eating it as soon as possible.

I asked the waiter to slice it down the middle and then across into smallish squares which I ate with my fingers. It was a delightful mains and so much more manageable in every way than a big pizza.

I never eat at the Bistró without ordering their apple tart. It is one of the island’s best two (regulars at Casa Maruka in Calle Reina Maria Cristina will know the other one) and it makes an ideal finish to any meal.

Its base is extremely thin puff pastry with luscious thin slices of apple and it is baked so that the edges of the pastry are nicely sticky and crisp.

It comes with a scoop of vanilla ice cream and it is sheer perfection. One of the reasons why it gets a 10 rating.

This apple tart brings a meal to a superb ending but my lunch wasn’t over yet — I needed a fifth picture and got it with their Arab tart with lemon curd. 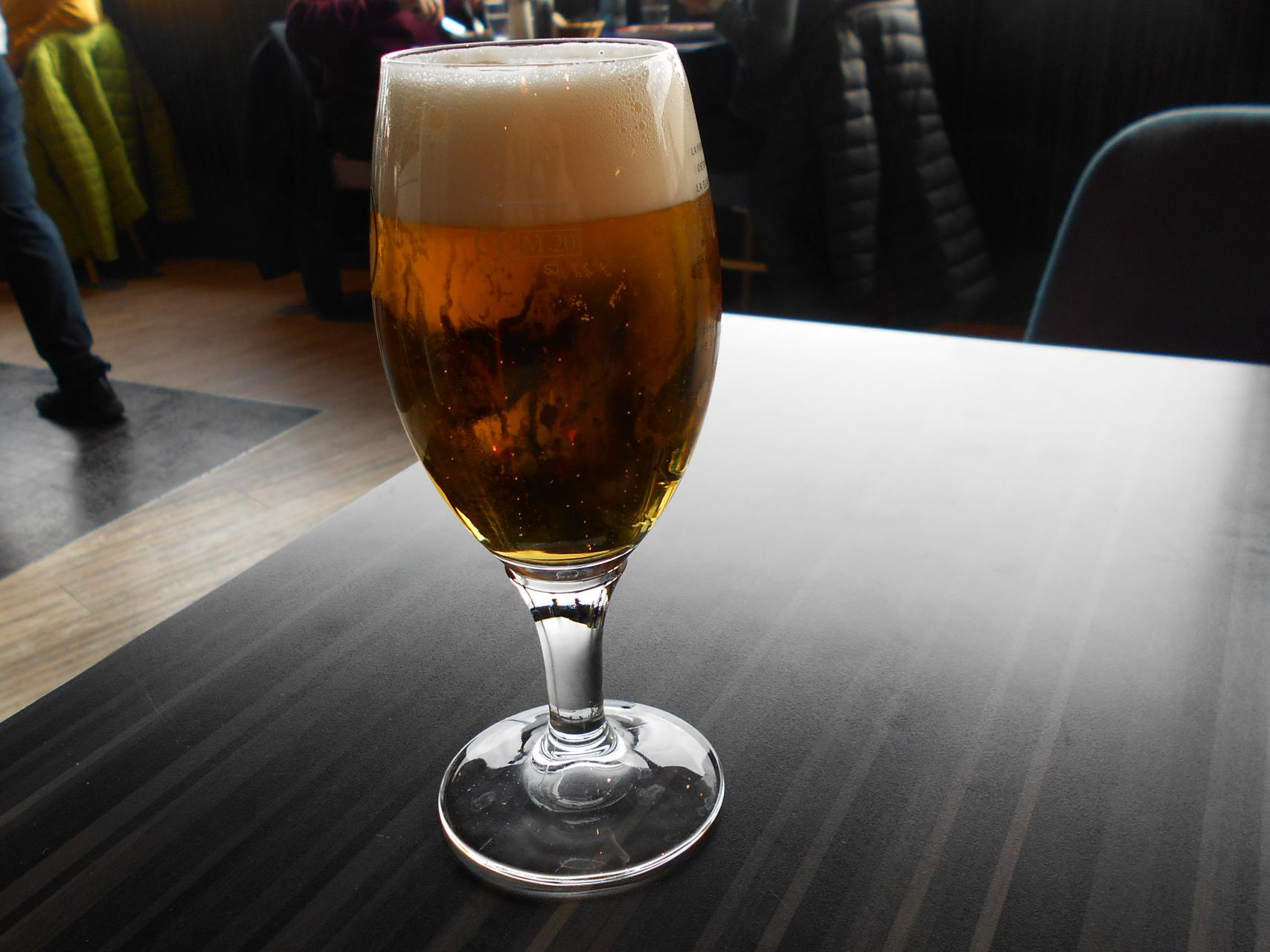 It’s made up of round wafers as thin as postage stamps (remember them?) the top ones interspersed with soft meringue, the final wafers being bathed in a tangy lemon curd. A nice light dessert but not an easy one to eat, even with a spoon and fork.

For the past three years or more I’ve been avoiding pizzas, mainly because the ultra thin Neapolitan ones are too soggy for my taste. Italians accept them most willingly, taking a slice, folding it over on itself and then biting into it like a squishy mini sandwich. It’s not my idea of a nibble and I’d rather have an thickish foccaccia with a drizzle of virgen extra olive oil and a good sprinkling of rosemary, thyme or oregano as the only topping.

Another alternative is the Bistró’s pizzeta, which sounds as if it’s just a small pizza, but there’s more to it than that. It is oval in shape and although it has a definite rustic look, its generous toppings give it a nice touch elegance. I had the pizzeta with oven roasted veggies such as onions and green and red peppers, with little cubes of white feta cheese and lovely blobs of very black Provençal tapénade. It makes an ideal mains for one, a starter for two and a good nibble for four.

My somewhat jokey request of an oyster in its shell and crisp oil free chips was in fact a delightful starter at only €7.20. An Arab tart consisted of a mound of circular wafers interspersed with soft meringue, finishing up with wafers bathed in lemon curd. Their thin puff pastry apple tart with a scoop of vanilla ice cream was at its scrummy best and was worth a 10 rating.

Bistró, on 5th floor of El Corte Inglés in Avda Jaime III with panoramic views of the Cathedral and the Bay of Palma. Open from 9am to 9.30pm when the store closes.

They don’t take reservations, but there is a quick turnover and even if the place is full, tables soon become vacant.