Fishing for lunch in central Palma

The farmed lubina was nicely done and worth a 10. | Andrew Valente

It’s psychological. When most of us think of fish we have visions of seascapes and perhaps fishing boats slicing through the waves as they head for port with that day’s catch.

When most of us feel like having fish for lunch, we see ourselves in a restaurant within a stone’s throw of the beach and there’s a platter of freshly grilled fish and shellfish on the table.

Fish eaters all lover the world do like to be beside the seaside, partly because they think restaurants with a sea view must be serving fresher fish than other places. Especially those in the centre of town.

But the fact is that the vast majority of specialist fish restaurants, even those where the sea is just a dozen steps from the back door, get their fish from the same market as restaurants in the busiest parts of town, with buses and cars dashing along the streets and through squares.

The fish at restaurants in the centre of Palma is just as fresh as in those places nestled in a little cove with the sea lapping the nearby sandy shore and perhaps splashing over a few small rocks. 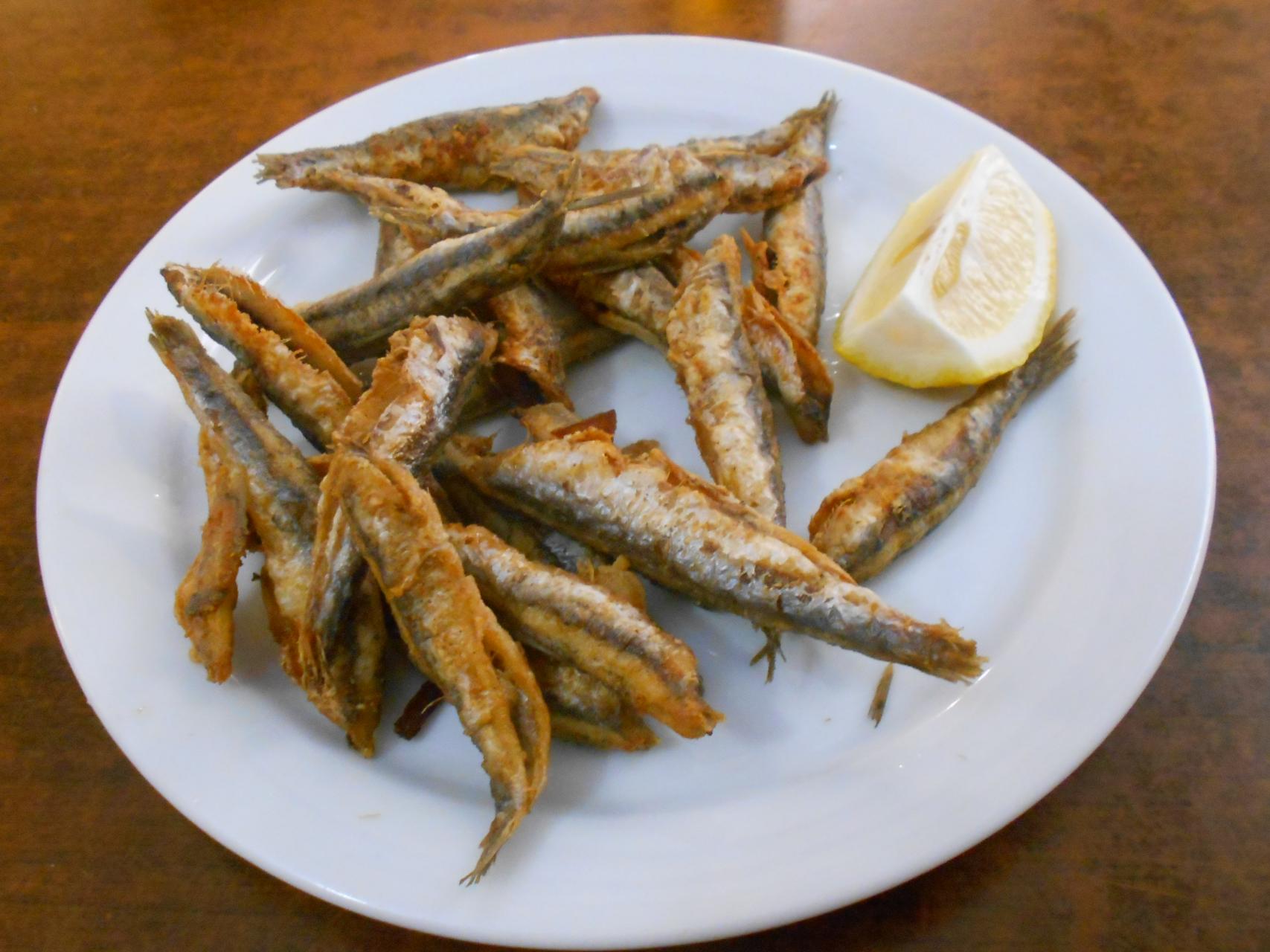 Brave cooks and restaurateurs in the recent past have opened restaurants specialising in fresh fish and shellfish right in the middle of town — there was one in Avda Argentina and another in Calle Apuntadores.

They didn’t click. Customers who can afford to eat out on the best fresh fish and shellfish, want to do it with the sea just a short distance away — and within sight. A fish place in Avda Argentina doesn’t fit the bill.

But if you like farmed fish as much as I do and if fresh anchovies and sardines cooked to order are your idea of a culinary treat, then you can have a very enjoyable all-fish lunch in the centre of Palma — and at a most reasonable price.

That’s what I had when I ate at Bar Día Lonja in Calle Apuntadores, where the nearest splashing water is in the fountain — and out of sight — at the Plaza Reina.

They had lubina a la plancha (sea bass done on a hot plate) at €12.50 so I knew it was farmed lubina…but that didn’t matter because all farmed fish, when properly and carefully cooked, makes for very good eating.

I had to explain to the waiter, repetitively and emphatically, that I wanted the lubina to be undercooked and juicy. I would prefer it half-cooked rather than even slightly overcooked. He had obviously never had an order like that for fish and he looked at me as if I were a little mad. But the message got through to the kitchen: the lubina was beautifully juicy.

The fish was cooked and served whole — and that was a wise decision. Restaurant cooks usually butterfly a fish like lubina because it looks extra large and impressive on the plate. Exposed like that, however, the flesh dries out more easily By doing it whole the lubina loses less of its moisture and it comes to the table so juicy and tasty that the untrained eye and palate could easily take it for a wild fish.

The cook even managed to get the skin nicely crisp while keeping the flesh so moist. I had no complaints whatever about this farmed lubina and I didn’t hesitate in awarding it a 10. That’s not psychological. It’s just common sense.

The Mediterranean has an abundance of fish of all sizes and shapes and two of the most accessible are members of the blue fish family: anchovies and sardines.

When referring to anchovies in Spanish, we have to learn that this fish comes in three quite different states: fresh, preserved in olive oil and preserved in vinegar. 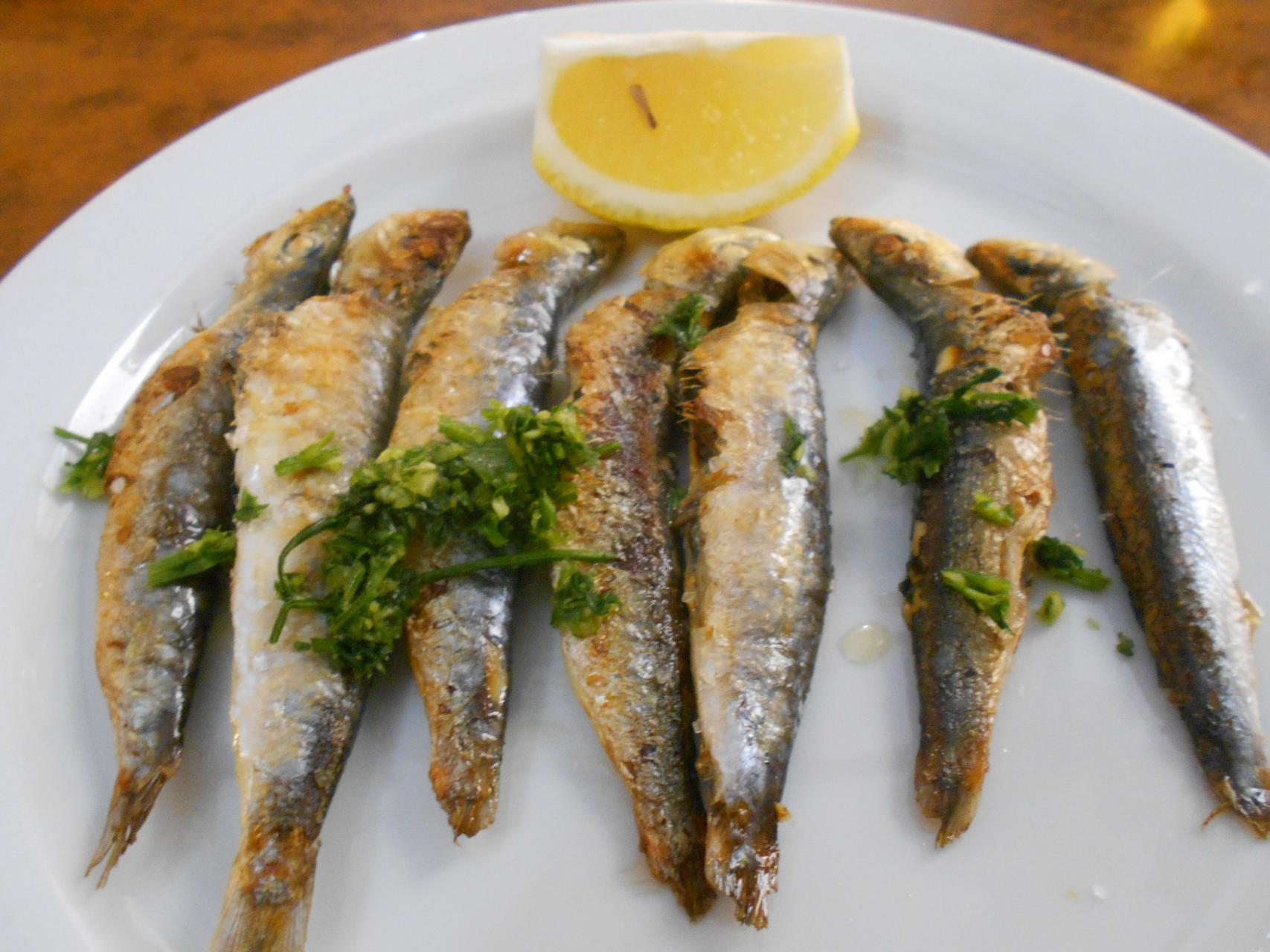 But when fresh boquerones are filleted, salted and then further preserved in olive oil, they are called ‘anchoas’ in Spanish — the word that means anchovy.

But fresh boquerones can also be preserved in vinegar — in which case they become boquerones en vinagre.

The boquerón is a dark-coloured blue fish when fresh but when salted and preserved in oil it is of a brownish colour. But when preserved in vinegar, the acid bleaches the fish, so boquerones en vinagre are white.

You frequently see anchoas and boquerones en vinagre in tapas bars and both are sometimes available as starters in restaurants.

Very fresh boquerones that are lightly floured and deep-fried are superb — and bars and restaurants in Palma usually make a good job of them.

In restaurants they are usually done to order and they come very hot from the deep-fryer. But at some tapas bars they could have been fried in a biggish batch, so when served they can be lukewarm and not so good. 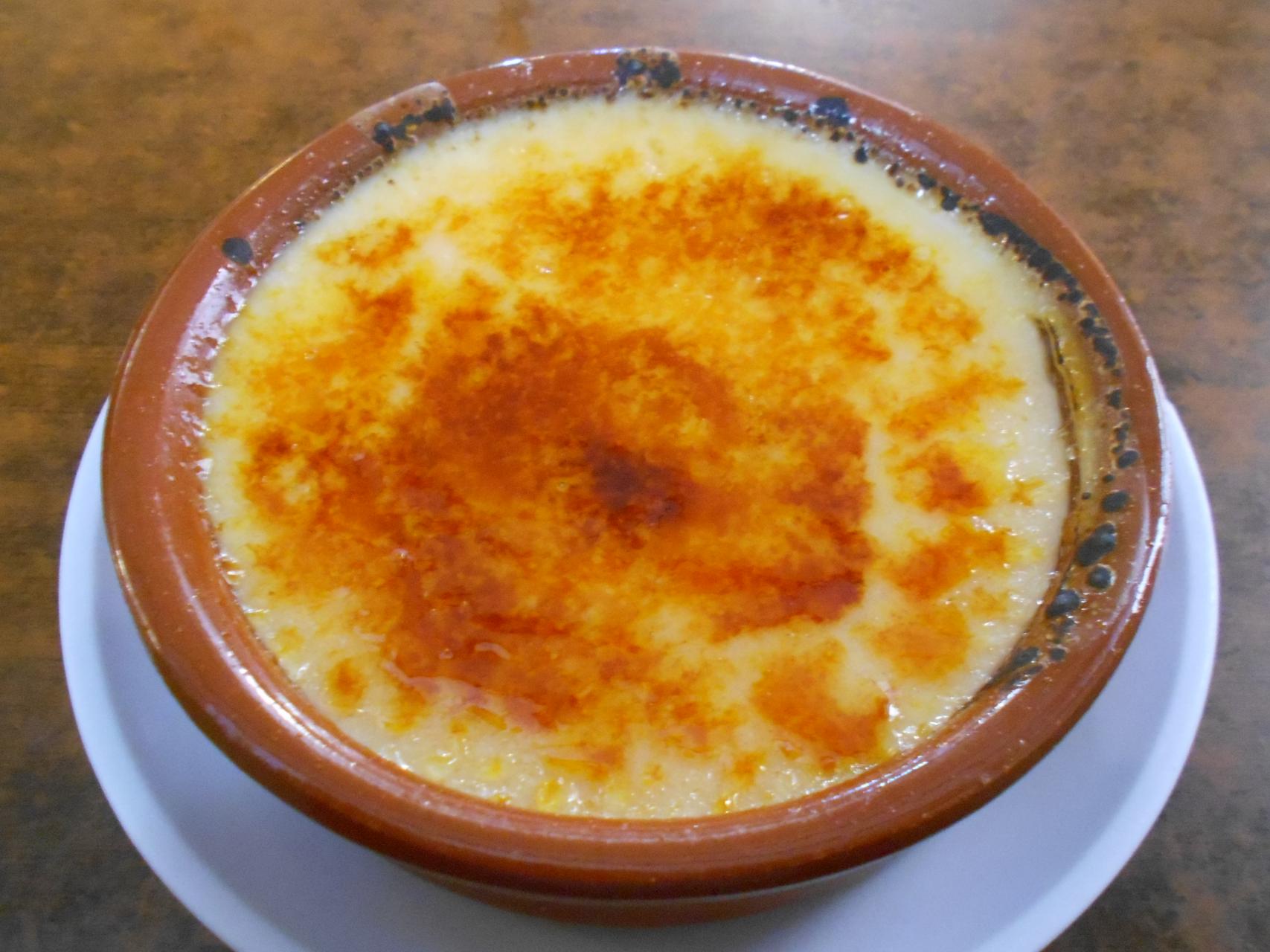 That didn’t happen at Bar Día. The boquerones fritos were piping hot and as they were the right size, the spinal bone was easily edible.

I would have preferred the sardines to be somewhat bigger but they, too, were very fresh and that’s important: it means the flesh is moist and has a lovely taste.

One of the nice things about ordering boquerones fritos and sardinas a la plancha in restaurants is that they are done to order, so as well as being fresh from the sea they are also freshly cooked. That’s also important.

Some years ago Bar Día (the ‘Lonja’ word is a recent addition) was very popular with British residents and some of the yachties. Canon Jim of the Anglican Church ate there and said their chips were the best in town. But the bar has new owners (who added the word ‘Lonja’) and they no longer do their own chips. Their frozen chips, however, are most acceptable and oil-free.

The boquerones (fresh anchovies) were indeed very fresh and nicely deep-fried. The sardines a la plancha were smallish ones but also very fresh and juicy, with a spinal bone that was soft enough to eat.

The lubina (sea bass) a la plancha was a farmed fish but it was delightful because we asked for it to be cooked for a shorter time than usual so that it would be nice and juicy. The cook did it exactly as requested and the lubina was worth a 10.

Bar Día Lonja, Calle Apuntadores 18, Palma. Tel:971-716264. Open every day for lunch and dinner. There isn’t a great deal of space here and although there’s a quick turnover and you wouldn’t have to wait very long for a table, it’s best to make reservation.